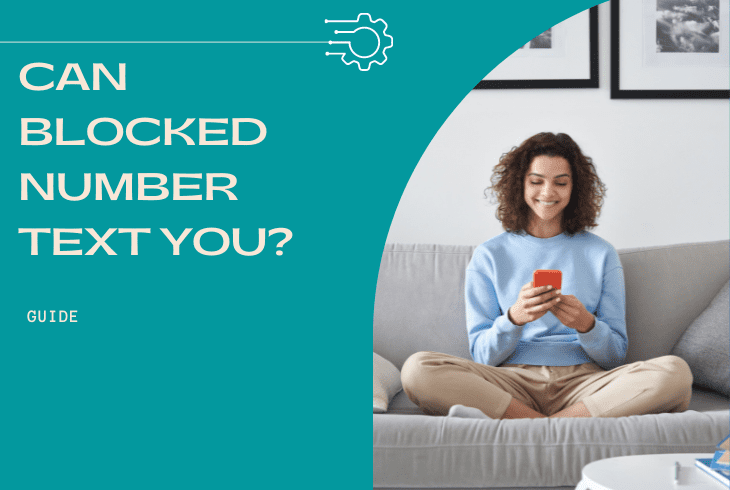 Many people wonder if you block a number can they still text you? Would it be possible for a blocked number to still send text messages to your number?

In this guide, we will discuss what it means to block a number, what activities a number you blocked wouldn’t be able to do, and how you can indefinitely stop getting texts from a specific number.

No, a number you’ve blocked wouldn’t be able to text you via the carrier’s network. They can, however, still send you messages using third-party applications and programs where phone numbers are used.

In understanding this matter a bit further, let’s discuss what blocking really does entirely to a number.

What Does Blocking a Number Do?

From the term alone, blocking a phone number means that all calls or messages that would come from that number to you won’t be delivered.

If you saved a number as a contact complete with an email address, then emails from the number connected to the email address would also be blocked if it’s sent to the default email app of the phone.

So, when they try to send you a text message, they’ll be able to send it, but it won’t be routed to your number.

When they try calling you, however, the call wouldn’t go through and will return a busy line to them.

That being said, when you block a number, it’s like you’re putting a barrier between your number and that particular number.

Can You Text or Call a Blocked Number?

Yes, you can still send texts to a particular number even after you’ve blocked them.

Blocking only works one way – if you block a contact, then you wouldn’t receive texts or be notified when they call you.

However, you can freely send them a text message and they’ll be able to receive it.

You can also call them, and they will be notified that you attempted to initiate a call to their number.

Calls Routed to the Inbox

When you block a contact, they would still be able to leave voicemails in your inbox.

In fact, the calls would automatically go straight to voicemail since you weren’t able to pick them up.

So, if you block a person and they decide to call you, it will go directly to your phone’s voicemail.

How is a Blocked Number Still Texting Me?

There’s no way for a number to lift the restriction on its own.

As a matter of fact, they won’t even know that you have done the blocking, and they can still communicate with you using a different form of communication.

Yes, you read that right!

Even if you blocked someone on your phone and they’re still able to text you, it could be because they’ve used a third-party messaging app.

There are a lot of messaging apps people use as an alternative to regular SMS or texting.

There are times when people use this to get around the regular use of SMS or text messaging.

For sure, you’ve used at least one (1) of these, but among the most common apps include:

There are a lot of other third-party messaging and calling programs out there, these are just the top and most-used ones.

If the person you’re blocking uses an iPhone, would iMessaging also be blocked when you block the number?

Is the iMessage facility exempted when a number is blocked?

Can You Block a Person on iMessage?

Yes, blocking a person or a contact from your iPhone would also block them from sending you iMessages.

Furthermore, it can also halt them from initiating a FaceTime session with you.

Since you’ll be “blocking that contact entirely,” anything that connects the number to the contact will be blocked.

But what if they decided to use a third-party messaging application, would it also be blocked the moment you put a stop to the number trying to contact you?

If You Block a Number, Can They Still Text You?

There have been reports where people said that the number/s they’ve blocked were still able to send a message through.

Is this possible? Can a number you’ve blocked be able to shoot through text messages?

The short and easy answer is NO, it is not possible.

A number that you’ve blocked shouldn’t have messages or calls coming through to your number.

But, if they use a messaging application that only requires the internet, their messages would be able to get through.

Should this be what the case is, what do you do to restrict messages from that person?

So, if ever you’re asking, how do I stop getting texts from a blocked number, then the facility they’ve used might not be regular SMS or regular texts, they could be using another application to send you a message.

Unlike missed calls, blocking a phone number or a contact would not be notified that you blocked their number from contacting your device.

It’s not like when they text you, it will show you a prompt or an alert saying, “this person restricted you from receiving their texts and calls.”

There won’t be any type of notification that their number has been blocked.

However, there are certain clues that they might pick up on to help them conclude that you have indeed blocked them from your contacts.

iMessage to iMessage – It Won’t Be Delivered

They will only be sent, meaning, the message was not routed properly to where it should be.

This is one indication that a person has blocked you from their contacts list.

Yes, they were able to send the message, but it was not sent to the receiving end properly.

All Calls Go Straight to Voicemail

Another sign that a number has been blocked is when all calls made to that number go directly to voicemail.

It won’t load up; it won’t ring – the moment you dial the number, it’ll be routed straight to voicemail.

So, that’s the truth about blocked numbers! They can only reach you if they use a third-party messaging or calling app.

Could a contact still text you even if you blocked their number? No, they can’t! Once blocked, they’ll be restricted from sending you text messages or from initiating outgoing calls to your number. They can, however, use another app or program to communicate with you.

The next time you find yourself asking, if you block a number, can they still text you, you know where to find the answer.

Just to be clear, this applies to all types of mobile devices, not just iPhones.

Save this or bookmark this guide so you don’t need to search through the millions of results concerning this specific inquiry.

Check out our recent helpful guides: