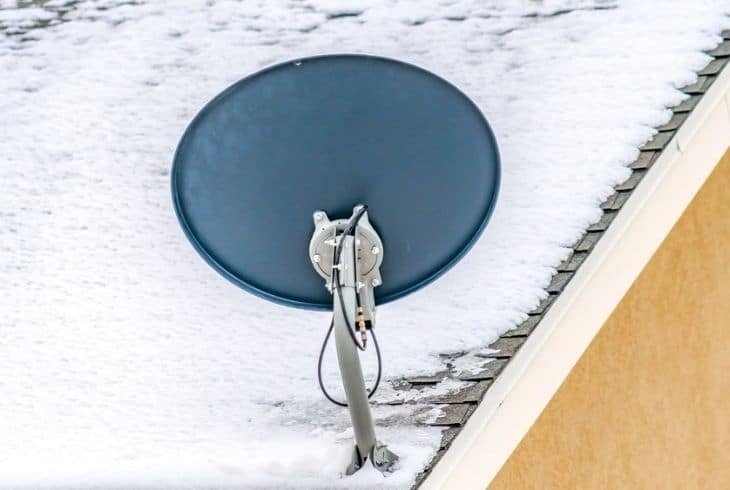 It’s essential to know how to keep snow off your satellite dish since the last thing you want to see after a heavy blizzard is the satellite dish covered in snow.

If a storm hits your region, a snow-covered satellite dish makes it hard to receive television signals.

To keep snow from a satellite dish, cover it with a dish cover (or a heat tape) or spray it with cooking spray. But once the snow is on the satellite dish, you can brush it off, shoot it off with a water gun or remove the snow with your hands.

Most modern satellite dishes are designed to shed snow and ice, but accumulations can occur in regions prone to heavy wintry weather.

In this article, you’ll learn the various ways of not only cleaning snow off your dish but also preventing the snow from accumulating in the first place.

How Snow Affects your Dish

Snow can affect the satellite dish in different ways. The most noticeable effects are physical damages on the dish itself and signal-related results.

When there’s snow on your dish, satellite signals can be refracted anywhere along the path from the satellites in space to the satellite dish.

Snow is frozen water. Water and wires or cables are never a perfect combination.

When snow damages satellite dish connections, it slow disconnects TV programming and internet connection to your devices at home.

READ ALSO :  Can I Connect My DISH Network Receiver to Wireless Internet?

When the snowing and thawing process happens repeatedly, over time, it damages your dish. Snow can also melt to water which will make your dish rusty.

You may have to incur the cost of getting another satellite dish if the dish is too rusty to receive signals.

Removing snow from the satellite dish shouldn’t cost you anything and it’s an easy thing to do. However, you may need to invest in heat tapes or a good dish cover which often costs less than $100.

How to Keep Snow Off Your Satellite Dish – Methods

It’s not always easy to get the snow off of your dish after a blizzard without the risk of hurting yourself.

But not removing the snow is a bigger inconvenience as you may have to go without TV or internet. Here are some methods you can use to get rid of snow or keep snow off your dish entirely:

A dish cover is less effective than a dish heater when used to keeping snow from accumulating.

However, they are very easy to install since you slip it over the satellite dish them in like a giant sock. Dishes covers are also relatively cheaper compared to dish heaters.

Here’s how to cover the satellite dish with dish heaters:

READ ALSO :  How to Turn off Standby mode on Dish? Easy Step-by-Step Guide

NOTE: With some dish covers snow will eventually accumulate on your dish, so you’ll need to remove it frequently. But the cover will greatly reduce how often you have to remove the snow.

There are several different solutions for ice and snow satellite signal interference, and the best one is to prevent snow accumulation in the first place.

To avoid dealing with snow on satellite dish apply cooking spray evenly on the dish. During a snowstorm, snow will slide off the dish, and you won’t even need to worry about it.

Here’s how to apply cooking spray:

READ ALSO :  How to Get Rid of Small Screen on TV Dish? Proven Ways

The oil will create a slick layer that makes it easy for snow to slide off and even easier to clean off any snow that might remain on top of the dish.

Using a cooking spray is a method highly recommended by expert dish installers.

You can wrap a head tape on the satellite dish, provided it doesn’t block any satellite signals.

A modern heat tape is well equipped with a thermostat that automatically turns off heat as the weather gets too hot and turns it back on as it cools.

A heating tape is one of the few permanent solutions for your snow on dish problem.

READ ALSO :  How to Connect Two TVs to One DISH Network Receiver?

You probably packed and kept your son’s toys away, hoping never to retrieve them again.

The water gun is not only a toy but might come in handy when you want to remove snow from your dish.

After a snowstorm, if you’re yearning to get TV signal working perfectly before that favorite show, using a water gun to melt the snow is your best solution.

Here’s how to use a water gun to remove snow from the satellite dish:

You don’t even have to get closer to the antennae with a water gun, so no climbing ladders or getting to the rooftop.

Note: Using a water gun in cold environments, or if water freezes, spraying your dishes with water may not solve the snow problem.

It’s easy to get snow buildup on satellite dishes, which can block reception. With a brush, you can remove the snow from the satellite dish and fix any programming interruptions caused by the blizzard.

However, brushing snow from a satellite dish is a very delicate task simply because you may end up changing the dish position.

Here’s how to clean it:

READ ALSO :  Can I Buy My Own DISH Network Receiver?

Get a broom with a long handle or paint extension pole strong enough to gently wipe off snow if your dish is a little harder to reach.

Note: Beware of the sharp edges of the satellite dish that may bruise or cut your skin when wiping off the snow. Ensure you’re always wearing hand gloves.

Read Next: How to Stop Dish from Changing Channels?

A dish cover, a heat tape or cooking spray should help keep snow off the satellite dish. The three solutions will see you spend a few dollars. The free solution (which are temporary solutions) uses a water gun or brush off the snow with a soft brush.

You can install snow heaters and enjoy the explicit pictures and the uninterrupted signal from the satellite dish no matter what type of weather gets in the way.

As you figure out how to keep snow off your satellite dish, ensure you don’t apply any malicious sprays to it. The unofficial rule is never to use a spray you wouldn’t use on your television to remove snow off the satellite dish.