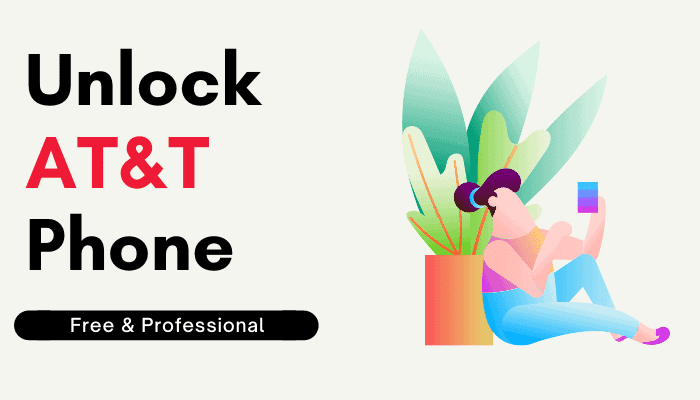 How to unlock AT&T phone? Finding it difficult? Stress no more!

Unlock your AT&T phone in no time with the aid of the practical steps given in this guide.

Network providers like Verizon, AT&T, and Vodafone sell phones to their customers for cheaper-than-usual prices under certain terms and conditions.

They then restrict the phone users from using other networks within 1-3 years.

Such contracts give the companies enough time to get back the cost of the phone plus profits.

These forms of contracts are only possible in regions where selling SIM-locked phones is legal.

Unlike Verizon, AT&T does not unlock their phones automatically after 2 months.

Hence, AT&T phone users might want to unlock their devices for a few reasons such as military deployment, intent to sell, relocation, vacation or freedom to use other providers (as freedom is a reason in itself).

Regardless of the nature of your reason(s), it is totally constitutional to unlock your phone.

How to Unlock AT&T Phone

There are two major ways to unlock AT&T phones. You can either request for an unlock code from your provider or hire professionals to flash the phone.

How to Unlock AT&T Phone by Contacting AT&T

The process of unlocking an AT&T phone is a bit tasking; hence it’s advisable to check if you meet their requirements.

Check if you meet the requirements below before proceeding to unlock your AT&T phone.

For AT&T Users Only

The phone you want to unlock must operate on AT&T networks. AT&T does not have the permission to unlock phones from other network providers.

There’s no way AT&T will let go off a contract if the user’s current installment plan or contract is not fully paid.

If you’ve not paid yet, do so, then wait for a day before making a request for the code.

What is Your Credibility Status?

AT&T will most likely not unlock a phone that has been reported stolen, missing, or involved in crime.

Ensure your account has a great credibility status and you’re not linked with fraud.

According to AT&T, they “reserve the right to deny any request that we (they) conclude would result in a policy abuse or is part of an effort to defraud our (AT&T) customers”.

In addition, it ought not to be active on more than one AT&T users’ accounts.

READ ALSO :  How to Get Phone Records From AT&T Easily!

Customers who performed an upgrade on their accounts must wait for a two-week “buyer’s remorse” period before submitting their request.

The buyer’s remorse period for business accounts is 30 days.

Once you’ve met all the requirements, you can proceed to unlock your phone.

Follow the steps below to unlock your AT&T gadgets.

Submit a request by filling the unlock request form and wait for at least 48 hours.

If you meet the requirements for contract termination, your unlock request will be approved in no time.

You will get an email or text message alongside a step-by-step guide on how to unlock an AT & T phone.

When filing your form, you will have to submit your phone number or IMEI number.

READ ALSO :  Why is My AT&T Cordless Phone Not Ringing? Complete Fix Guide

AT&T no longer impose a hard unlock limit every year, but you can still be flagged as suspicious after mailing 100 unlock requests in 30 days.

Use this link to check your request status.

Once your request is approved, you will receive a mail with a code and basic instructions.

Every device has unique instructions on how to unlock them.

However, this guide gives you a general guide for all devices.

For a Typical Android Phone/Tab (Samsung)

The phone will ask for the code and you’ll only get 5 tries to unlock the phone.

After pressing ok, you’ll be free to use other SIMs on your device. You don’t have to repeat the process when you want to switch network providers again.

You have to be extremely careful when inputting your code. Multiple failed attempts can result in a permanent block (which disables the phone’s unlock feature).

Although Apple users need to submit a request, they need not wait for a code to complete the process. Also, Apple accessories such as Apple watches and iPads do not need to be unlocked before using other networks. They have been unlocked before getting to the end-user.

Instead of inputting an incorrect code after losing the code, you can resubmit the request and they’ll resend you the code.
Other Option.

In case you are planning to go on a trip and don’t want to lose your SIM, you can subscribe to an international plan.

Military officers who have been redeployed to places outside the AT&T network coverage do not have to honor the contract or pay termination fees, as long as they can submit a copy of their temporary or permanent change of stations.

How to unlock AT&T Phone by Hiring Professionals

To save time and energy, you can hire professionals who can unlock your device either by flashing or through the normal route.

Oftentimes, they charge an upfront fee which does not exceed $50.

If you’ve been rejected several times by your network provider, your best bet is to hire a professional to unlock your device.

Some professionals can unlock phones that have been permanently locked or blacklisted without hampering your warranty since no software or hardware damage was inflicted.

These groups of professionals often boast of being able to unlock phones that even AT&T does not accept.

Depending on the device, they can bypass the trapdoor feature by generating a code from IMEI details and MCC codes that have been technically altered.

Another way to bypass the device security is by overwriting the firmware where the lock status is hidden.

Avoid sending multiple failed requests by hiring a professional to do the job for just a token.

And hence going with a professional is the best way to go if you want the unlocking process to go smooth and fast.