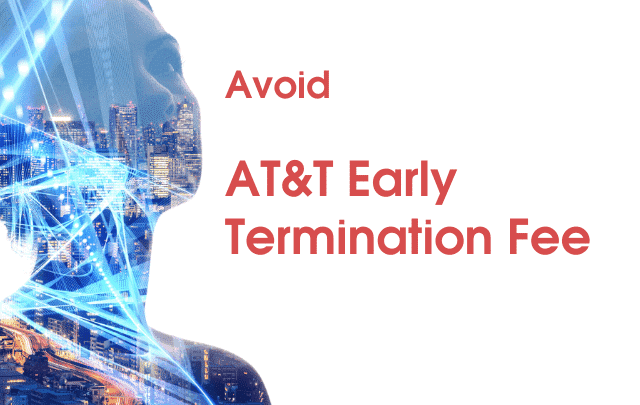 Are you searching for how to avoid AT&T early termination fee?

Do not worry. Keep reading to learn more!

Businesses like to keep their profits high by trying to minimize their losses. In that sense, it is quite clear why the service providers are after early termination fees or ETF in short.

As a service provider, they simply do not want their customers to go away or cancel the contract early before the completion.

But it is also quite evident that the termination fees are quite high and are thus making the customers unhappy in many ways.

Therefore, most customers want to know what is the exact ETF and how to avoid it.

READ ALSO :  Why is My AT&T Internet Not Working? [Quick Fix]

When a customer decides to leave the contract in between, this can lead to losses to the Company.

The business will not be able to cover the cost spent on a customer. This is the reason why AT&T charges ETF.

However, but if noticed from the customer’s point of view it is a big and unnecessary expense. Usually, these termination charges are quite heavy and not feasible.

Customers usually would want to leave service for various reasons. But out of them all, the major one is unsatisfactory service.

So why should a customer pay a fee or penalty for leaving something that they didn’t like in the first place?

READ ALSO :  Why AT&T Internet is So Slow & How to Make it Fast

Is this a Penalty?

While buying a device, there will be a contract with a specific time limit. If you cancel the service before, then ETF is charged.

For this, a buyer needs to agree to the term of a service commitment of the wireless provider contract.

Service commitments are also something that helps a buyer in buying a device at a reasonably discounted price. Based on the device brought by the user, the company charges ETF.

Therefore it can be said that the extra charge is an excellent trick to stop the customers from walking out of the service contract.

The basic and current ETF charging rate by AT&T is often confusing for users. Let us know the exact fees charged by AT&T:

* Total month charge = 10 dollars multiplied by the number of months completed in the service commitment.

One of the significant issues with the AT&T services that there is a restocking fee for each contract.

This restocking fee is basically for those sim cards that are present in wearable and high-end devices. The restocking fee charged by the AT&T services is 35 dollars.

A period is given to the customer to decide the termination of AT&T service.

Till then, the customer is not bound to pay any charge. This no penalization and charged termination period is of 14 days.

To give you a more clear idea of the charges let us explain with the help of an example.

Let us assume you have entered a contract with AT&T for wireless internet for two years. But due to some problems, you cancel the contract after 8 months of use.

Now that it has become quite clear that AT&T’s early termination fees are quite substantial and unfeasible for the customers.

There are some excellent reasons to avoid them and ways not to pay them. One of the significant ways to avoid this charge is canceling the contract and by getting a new wireless carrier at a subsidized price, which will be cheaper.

This can be due to the fact that according to the legal terms of AT&T; an increase in the cost of service can only be included with the government prices.

If government pricing is not increased then a customer can terminate and can evade paying ETF.

Let us discuss in detail how you can avoid the ETF:

One of the most important things to pay attention to is the fact that you should call directly and talk to them, telling them to void the ETF.

Please do not rely on chat support as they will not be able to help. Instead, call and reach the retention department to get the contract canceled.

Point it out to the manager that the ETF is not as per the terms and conditions, and thus is not a mandate to be paid.

READ ALSO :  How to Change NAT Type on AT&T Hotspot?

Currently, the AT&T service providers have mentioned that the legal term stated is not applicable. This is because the charges are now stated to be a part of the administrative fees.

Therefore it can be more difficult for the customers to get a waiver. However one can also opt for an arbitration mode, where a third party can be brought into the scene to decide.

Another very effective way to avoid AT&T’s early termination fee is by changing the carrier.

One can find a much less expensive plan than AT&T and can also get a good quote from the service providers. One of the best ways is to opt for a trade-in plan.

Important Facts for a trade-in Plan:

After the number is ported, get the previous plan canceled. After the cancellation, submit the AT&T ETF bill to the new carrier. This way the new carrier will pay some of the ETF or even full in some cases.

Also, another very significant way to avoid this extra charge is by choosing a prepaid plan provider instead of a postpaid contract.

These plans are plenty in the market, and you will not have to pay any ETF on cancellation.

One thing that usually concerns customers is the fact that one may have to pay more for better services in these plans.

But if one compares the overall cost to a postpaid contract and ETF, it is quite better and feasible.

Can you Waive off Early Termination Fee

Many users of the company have doubt whether they can waive off AT&T Early termination fees.

If you have terminated the connection within the 30 days period you can get the fees waived off.  But to make sure it is waived off, check the terms of the contract that you agreed on taking the new connection.

Also when you want to shift your connection to a new address;  but there the service is not available, you can ask AT&T for a fees waiver.

But in both cases, the fee waiver is subject to the agreement made at the time of contract.

Finding a good service provider has become quite difficult of late, and on top of that, the charges are now much higher comparatively.

But paying a termination fee is quite a hassle for the customers, which needs to be avoided.

Though AT&T has now canceled the ETF on the new plans, the ones stuck in the older ones still need to pay.

These few ways on how to avoid AT&T’s early termination fee can come in handy for those who still have a 2-year plan going and would want to cancel it.