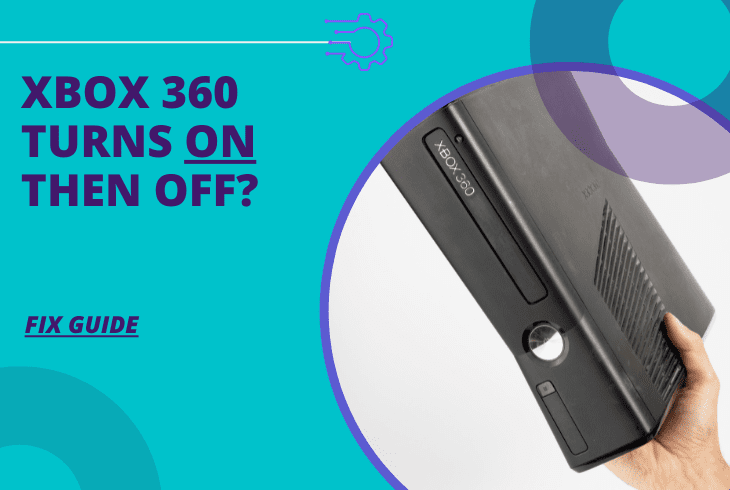 Wondering why Xbox 360 turns ON then OFF for no reason?

It’s simple. In most cases such behavior is caused by fluctuations in the power or the fault is related directly to the power supply of the console.

When Xbox 360 turns ON and then OFF, users should first discharge the device completely and check whether this will help. If not, further solutions include inspecting the power components of the device and disabling the Auto OFF feature.

Why Does The Xbox 360 Turns On For a Second Then Off?

Your Xbox 360 turns on then instantly off mainly due to issues with the power supply.

The Xbox may be turned off due to the following reasons:

Keep reading to learn more about the causes and how you can fix them in easy steps:

How To Fix When Xbox 360 Turns Off Right After I Turn It On?

To solve the power-related problem with your Xbox, you’ll need to undertake a series of solutions that will address each possibility until the true cause is revealed.

A hard reset or a power cycle is a process that will completely discharge the console.

If an insufficiency in the power supply is causing the Xbox to shut down right after you turn it on, this problem can be resolved with a hard reset.

To execute a hard reset on your Xbox 360 console, follow these instructions:

If your Xbox 360 is turned off and you boot it back on just for it to shut down again, this issue tends to be due to overheating.

The overheating is caused by improper ventilation of the console or too much dust covering the hardware.

Here’s how you can prevent your Xbox 360 from overheating:

In addition, overheating can also be caused by just using your Xbox 360 for too long.

If you can hear the machine getting louder while playing, this means it reaches higher temperatures.

Solution #3 Use A Different Power Source

You can test out the situation with the Xbox’s power supply, by connecting the device to an alternative source.

If there’s a power shortage or a malfunction with the current outlet, your Xbox 360 won’t be able to withdraw enough power and will shut down regularly.

Disconnect the power of the console and plug it into an alternative power source.

It could either be a power strip or a standalone power source, but make sure that the outlet is fully functional before plugging in your console.

To identify if there’s something wrong with your Xbox’s equipment, you should reset the power supply.

This reset is going to discharge the power cable and brick to resolve any malfunctions or glitches causing the device to shut down.

To reset the Xbox 360’s power supply, follow these instructions:

In case resetting the power supply didn’t work and the Xbox 360 turns on then off again, you should perform a factory reset on the console.

This will revert all settings of the device back to their factory value and fix any glitches that are causing the unit to shut down.

To reset the Xbox 360 with the shutdown problems, you must enter safe mode!

Here’s how to enter safe mode on your Xbox 360 and reset it to default settings:

After the console has been reset, no data would be available and the hard drive will be clean. Users need to carry out the initial setup including WiFi connection after the reset.

Although this is more unlikely to cause the problem, the “Auto-Off” feature regulates the time period of your Xbox 360 being inactive, before it automatically turns off.

If you have enough time to navigate to your Xbox 360’ settings before the device shuts down, you should disable this feature and see.

Here’s where to find the “Auto-Off” feature in your Xbox 360’ settings:

The last thing to do before delivering your Xbox for a repair is to replace the power components which are the main suspect.

Your Xbox 360’s power supply consists of a power adapter and a power supply (brick) that connects to the console.

How To Replace Xbox 360 Power Adapter?

Once you have the power adapter ready, you can replace it the following way:

How To Replace an Xbox 360 Power Brick?

If you have a new Xbox 360 brick, install it this way:

Hence, Xbox 360 turns ON and OFF because of power insufficiency or fluctuations in the power supply. The solution includes performing a power cycle followed by disabling the auto turn OFF feature and resetting the power supply.

Now that we know why Xbox 360 turns on then off, we can address this problem by following the solutions above.

In case the problem is persistent, further assistance can be acquired by contacting the Microsoft customer support center.