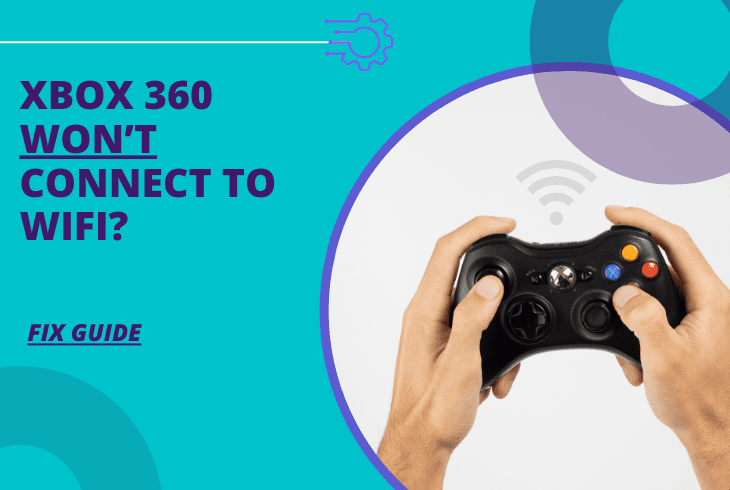 Wondering why Xbox 360 won’t connect to WiFi? Keep reading to find out!

When a console won’t connect to the WiFi, you can easily tighten the circle of possibilities by inspecting your internet.

That should suggest where the issue is coming from.

When Xbox 360 can’t connect to WiFi, the solution includes a full inspection of the WiFi and network router before focusing on the console. In case the internet is intact, you’ll need to unplug ALL devices connected to the Xbox and perform a reset.

There could be many causes that are preventing your Xbox 360 console from getting connected to the WiFi.

The problem could either be related to an issue with your console or the network and WiFi you’re attempting to connect to.

Here’s what most frequently prevents the Xbox console from connecting:

Operating system issues are typically related to an outdated firmware version, a problem with the Xbox connectivity, and even sometimes restrictions.

An issue with the WiFi network you’re connecting to your Xbox 360 will prevent the device from completing the pairing.

Issues with the network can be caused by over-used bandwidth, cable connection issues, or general wireless network interference.

Many Xbox 360 users admitted that specific third-party devices connected with your console might cause a problem with the wireless connection.

Such devices could be wireless headphones, WiFi receivers, or Bluetooth devices.

Let’s next learn how to solve the problem when your Xbox 360 won’t connect:

How To Fix When Xbox 360 Can’t Connect To WiFi?

The solution includes a few straightforward methods as well as some tips that you would need to pay attention to.

It’s important to follow the order of our solutions since skipping steps could be essential to solving the problem.

The first move against the problem should be a power cycle on your Xbox 360 console.

This method will clear out any software bugs and glitches that may be causing the wireless connectivity to drop.

In most cases, this approach is enough to solve minor problems.

Here’s how you can power cycle your Xbox 360 console:

The Wi-Fi encryption problems may indicate that this type of network isn’t compatible with your Xbox.

This problem can commonly occur if the router’s wireless settings are set to WPA2-AES.

If your Xbox 360 keeps claiming that the connection with the network is unsuccessful, disabling the Wi-Fi encryption might help solve the problem.

To temporarily turn off the Wi-Fi encryption follow the steps below:

Solution #3 Resolve Problems With The Network

Issues with your WiFi/network are what cause these connectivity issues the most.

By fixing any network-related issues on your side, you can get your Xbox 360 connected to the WiFi and paired with the Xbox live servers.

Here are the most often solutions to problems with your network and how to apply them:

In case your internet is gone and this is why the Xbox 360 won’t connect, you should reach out to your ISP for further information about the outage.

When the Xbox 360 won’t connect to WiFi there is the potential of another wireless device that’s preventing the connection.

Such interference can prevent your Xbox from connecting.

In that regard, make sure that you leave no device connected to your Xbox, except for the TV or monitor that you generally use with the console.

Any transmitters, USB sticks, and especially headsets (wired and wireless), must be removed from the console.

Once only a TV or a monitor is left connected to your Xbox 360, retry the connection and check if the issue is now fixed.

There’s a chance that some of your router’s network defenses are preventing the Xbox 360 from connecting.

One of those defenses is your network’s firewall, which is the main instance, responsible for keeping your network protected from DNS attacks, and viruses.

To disable your router’s firewall (temporarily), follow these instructions:

In case nothing worked so far, then we strongly suggest performing a factory reset on your Xbox 360 to resolve this problem.

A software complication that may include corrupted data or faulty firmware can absolutely cause interference with the WiFi of your console.

Here’s how to factory reset your Xbox 360:

When the console is reset, everything on the system will be clean, therefore any corrupted data and bugs should no longer exist. Your Xbox 360 should now be able to connect to the WiFi.

The last solution is more of a workaround and it’s just to test whether your Xbox 360 won’t connect to one particular network or ALL WiFis.

You can easily obtain a secondary WiFi to test with by sharing a hotspot from your smartphone.

In case your console won’t connect to any network, you should contact Xbox support.

When Xbox 360 won’t connect to the WiFi, users need to restart the console and temporarily disable the router’s WiFi Encryption and Firewall. In case that doesn’t help, performing a factory reset on the Xbox would be able to solve the problem.

Now that we know why Xbox 360 won’t connect to WiFi and what the solution includes, the problem should no longer exist.

However, when your WiFi is intact but the Xbox keeps refusing to connect, perhaps there is an internal problem that would require servicing.

When the problem is persistent users should attempt to use the warranty!