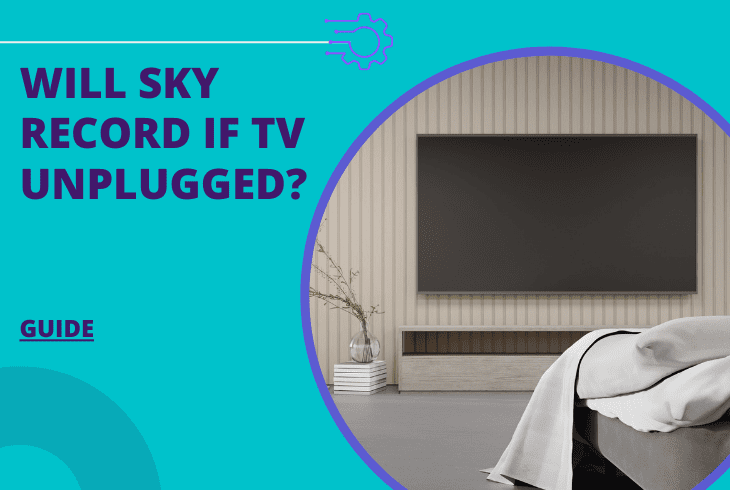 Wondering will Sky record if TV unplugged? Stay with us to find out!

The Sky TV Box is an excellent tool to capture any episodes on any channel when you’re away and can’t watch the premiere.

However, sometimes we’ve got scheduled recordings but we don’t want to leave our TV working the entire time.

Can the Sky Box record without a TV?

The Sky TV Box will record with the TV being turned ON or plugged into the power and will not go into Standby Mode until ALL scheduled recordings are completed. The TV (output monitor) is only necessary to configure and schedule the capturing sessions!

Let’s next learn more about how Sky TV Box records to answer some questions!

The Sky TV Box allows users to record upcoming episodes automatically or record once, which is a good functionality.

In order to record a show, you need to press the “R” (record) button on the remote control.

In case the show is part of a series, every next episode from now on will be automatically captured.

Let’s next learn more about what role in the setup the TV plays and whether we can record without one.

Will Sky Record if TV Unplugged?

The television is only the Sky TV Box output monitor and it’s not the device that is actually streaming the channels.

The recording is also a feature on the Sky TV Box and not on your TV.  In that set of thoughts, we can understand the outcome of turning OFF our TV.

Even if you disconnect the Sky Box from the TV, won’t as well impact the recording in any way, since we’re speaking for an output monitor.

To visualise this better, ask yourselves this:

Of course not, the same goes for almost any streaming box including Sky.

In order for your Sky Box to record, the device has to be plugged into the power and working.

In addition, the recording settings should be configured on which channels you wish to record.

However, disconnecting the Sky TV Box will most certainly stop the recording in any variety!

Will Sky Box Record Without a TV?

As we’ve already mentioned, the TV is only an output monitor for your Sky Box, which works just like a computer.

Disconnecting your TV from the power source or switching the unit OFF, won’t prevent the scheduled recordings from executing as long as the Sky Box is working.

The Sky Box will record entirety without a TV, as long as the recording schedule is configured with an output monitor (TV) beforehand.

Without having access to the Sky Box’s settings you can’t configure the recording schedule, hence, can’t record without connecting to the TV first.

Will Sky Box Record On Standby?

Well, sometimes things get complicated but we’ll describe the operational mode limitations as concisely as possible.

By default, your Sky TV Box won’t go into Standby Mode until ALL scheduled recordings are completed.

Sometimes, when we put the Sky Box into Standby manually, the TV Box will turn ON/OFF during the recordings the process will fail.

We can, however, easily disable the Standby Mode!

The Sky TV Box should return to normal operation and will be able to fulfil any scheduled records regardless of whether a TV is connected or not.

It’s important to avoid putting the Sky TV Box into Standby Mode when you have scheduled recordings to be captured.

In case you’re curious what the difference between electricity consumption, keep reading!

We now know if I unplug my TV will my Sky still record, let’s take a look at what we’ll spent leaking our device turned on the entire time.

Turning OFF our TV is quite a save on the monthly bill, so let’s take a look at how much electricity your Sky TV Box would spend…

As we can tell, you’re going to be paying more for your Sky Box but will in the meantime save by switching OFF your TV when not watching.

When the scheduled recordings are over, you can again, either switch OFF your Sky Box when not recording/watching or put it in Standby Mode.

How Long Can Sky Box Record Without a TV?

The combination most users do is TV = OFF, Sky Box = ON. This is the perfect method to capture ALL episodes you need while you’re on a holiday.

In case you’re wondering how much time your setup can last like this, you should be worried at all.

The Sky TV Box is equipped with 500 hours of SD storage, which means that you can capture a quote lot of recordings before you run out of space.

As far as the TV, it doesn’t have to be working even for a minute for all recordings to be captured and saved.

How To Cancel Sky Box Recording Without a TV?

In case your TV is not turning ON, or temporarily don’t have an output monitor and want to stop your Sky Box from recording, it’s possible.

You simply need to switch OFF the Sky Box, otherwise, you would need to enter Shecudles > Cancel Recording.

Navigating through the settings might not be possible when there is no output monitor.

This is why turning OFF the Sky Box will definitely stop any scheduled records.

Later when you mount your TV or regain access, you can re-enable any schedules and record whatever you need.

That was everything about Sky Box recording without a TV so let’s recap what we’ve learned!

Hence, the Sky TV Box will be able to record without having the TV turned on or even plugged into the power source. The Sky Box will not automatically enter Standby Mode when there are pending recordings, which prevents failure.

Now that we know will Sky record if TV unplugged we can confidently turn OFF our television when we’re going to bed and have a piece of mind that we’ll still get the recordings.

If there is one general requirement is that your Sky TV Box should be manually put into Standby or disconnected from the power.

We hope that this guide was helpful and for more Sky-relevant content, check our blog!

Read Next: How Do I Cancel BT Sport on Sky?