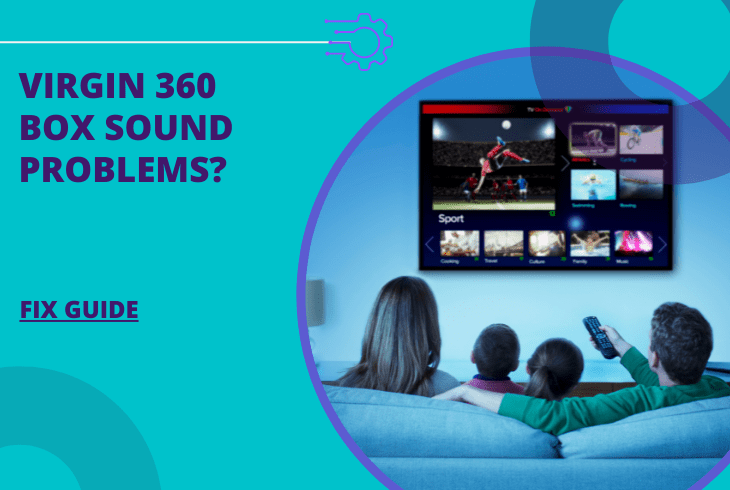 Your Virgin 360 sound out of sync? The solution only requires 5 minutes of your time!

In most cases when the broadcast and the sound output of your Virgin Media cable box are out of sync, there’s a signal issue.

Users have reported multiple scenarios and have discovered what’s causing the problem.

That helped us to conduct this quick guide!

To fix a 360 or TiVo box that is out of sync, set the audio to “Dolby to PCM” and power cycle the cable box. Next, reconnect and/or replace the HDMI cable as you plug it into a different port. Finally, adjust the Audio Settings and perform a Factory Reset!

Let’s learn how to fix the out-of-sync problem on a Virgin 360 cable box first!

How to Fix When Virgin 360 Sound Out of Sync?

The solution to whenever your Virgin 360 box is out of sync is really simple.

We’re just going to address ALL possibilities one by one until we discover the culprit. Let’s jump right in.

To avoid sound issues with Virgin 360 Box we need to change the audio encoding from Dolby to PCM.

This will straighten the signal and should get the audio back in sync in no time!

Here’s how to change the ‘Dolby to PCM’ setting on your 360 boxes:

Once the new settings have been selected, play a channel on your 360 boxes and determine if the out-of-sync problem is still there. In case the lip sync is still there, proceed further!

Most TVs nowadays have a feature that syncs the audio and video of an externally connected device.

Rather than interacting with your cable box in this solution, you will be searching for this feature in your TV settings and activate it from there.

On most TVs, you will find the “Audio Sync” in the following way:

Once the audio sync procedure has ended, choose your cable box’ source and test.

The lipsync should no longer be there. However, in case the issue is there, proceed with the next solution!

The chances are that the problem is in the HDMI cable. The video and sound sync problems most often include issues with the physical connection.

In that set of thoughts, replacing the HDMI cable might be the best next step.

Once the old HDMI cable is removed, get a new unit to use and install it in the same manner as the old one.

In addition, you could use a different HDMI input on your TV this time. This will help you determine things even further and localize the problem.

When you’ve tried everything, but nothing helped, the next step is to Factory Reset the Virgin 360 cable box.

The process is really helpful, especially when it comes down to software bugs, such as loss of audio sync.

Alert: The factory reset reverts ALL settings to their original state!

Here’s how to reset your 360 cable box in easy steps:

If the issue with your 360 TV box still persists, don’t hesitate to try these fixes as well!

The TiVO and Virgin cable boxes are similar in software, so resolving the problem should be easy!

Let’s begin with troubleshooting and get the sync issue solved in no time!

The first and best approach to any audio and video problems with your TiVo cable box is to Power Cycle the device.

This process will discharge your device’s electricity and refresh the software completely, solving any issues that have occurred.

Once those 5 minutes have elapsed, feel free to reconnect your cable box to power and test if the audio problems are still there.

However, keeping the cable box unplugged for less than 5 minutes won’t be efficient. Be patient and allow the device to cool down.

There are multiple solutions you could attempt when it comes down to your box’s audio settings.

Some settings withdraw too much performance of your cable box, which can cause a loss in sync between the broadcast and the audio.

Those could be the Screen Reader, Sound Effects Volume, Alternate Audio and Dolby audio.

Let’s review the first way to fix the audio settings!

There could be interference with the volume of the sound effects. It’s suggested that you put them at “Low”, while the default value is “medium”.

In your TiVo audio settings, go to “Sound Effects Volume” and set the slider to “Low”.

Test for any audio problems and then attempt to put the effects at “High”. Test again.

There’s a feature in your TiVo setting that enables you to choose what’s the language of upcoming shows that have multiple an option.

It’s best to change the language and then revert it back, in case an issue with the language reading has occurred.

Fix #3 Reconnect the Cable Box from the TV

Chances are that there’s a physical connection problem between your TiVo cable box and the TV.

What you could do in such a situation is reconnect the cable box from the TV and potentially plug it into an alternative HDMI port.

Since HDMI transfers both audio and video, problems with the cable could also result in sound issues and out-of-sync. Therefore it’s worth the try!

Hence, the fix when Virgin 360 or TiVo boxes are out of sync is to hard reset the device and switch from Dolby to PCM audio. The next step is to adjust the Audio Settings and disable the Screen Reader. If nothing worked, perform a Factory Reset on the cable box!

After learning how to fix the Virgin 360 sound out of sync problem on your 360 box, we leave the troubleshooting up to you!

This is a common issue with streaming media, but hopefully, this guide managed to help.

Looking for an HDMI cable?

The Silkland 4K HDMI Lead with Ultra High-Speed support is the best recommendation we can provide.

Bring your streaming to the next level with the latest resolution support for an HDMI and your Virgin Media cable box. No sync problems are expected with this cable!