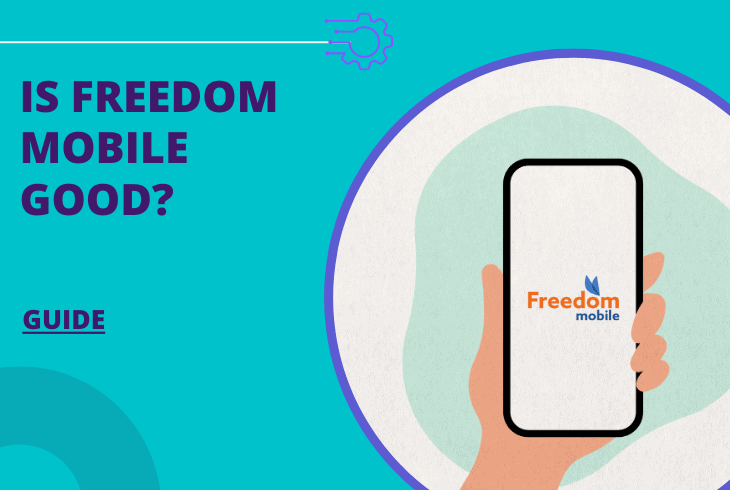 If you are considering migrating from your mobile network, you may be wondering – Is Freedom Mobile good?

There are a few key factors you should consider when looking at a network provider.

With Freedom Mobile being the fourth largest mobile network in Canada, it is worth consideration.

Freedom Mobile is a good carrier for those who can access Freedom’s local network. It has the most affordable rates compared to the big three. However, the network still has a lot to do in terms of infrastructure investments for quality.

This article looks at Freedom Mobile in detail. We will consider its speeds, costs, coverage and other factors to determine its usability.

Key Factors You Should Know About Freedom Mobile

Besides the fact that it is the fourth largest network by subscribers, there are some interesting facts to note.

Freedom mobile is one of the newest mobile networks but there is more to it.

Is Freedom Mobile Good in Coverage?

The first and most important point we want to consider is Freedom Mobile’s coverage.

Freedom Mobile is divided into

This is the coverage you enjoy when using Freedom Mobile in Major Cities including Alberta, British Colombia and Ontario.

On this plan, you will enjoy maximum speeds on the internet and all the features on your plan.

This option is available in regions where Freedom Mobile does not have coverage.

This includes outside the major cities. On this option, the carrier flips to partner carriers to access most of their feature.

Like most Nationwide carriers, Freedom Mobile partners with local carriers.

Freedom mobile has heavily invested in infrastructure to boost reception. Over the past couple of years, its reception has improved to compete for toe to toe with most local providers.

If you are asking if Freedom Mobile is good in Canada, the answer lies in your reception. When it comes to reception, signal strength varies from region to region.

Major cities enjoy the best signal strength. Those in rural areas have a signal but may not experience full features due to poor reception.

Key factors you have to note about Freedom Mobile signal strength

While reception is still challenging in some areas, Shaw’s communication has heavily improved coverage.

Freedom Mobile says that millions of its customers now have access to LTE data. The brand is also pushing for the rollout of Extended LTE.

This is a major step that will help the carrier extend its coverage.

When you are looking for a carrier, one of the major considerations is the data plans.

One of the reasons why most people use Freedom Mobile is the packages they offer. They have some of the best packages for a nationwide carrier.

Their packages mainly include talk, text and huge amounts of mobile data. With Freedom Mobile being one of the cheapest carriers for such a combination, you understand why people love it.

Below are some of the top plans you can get from Freedom Mobile:

This package is available on Freedom Network and Freedom Nationwide. This means that you will only enjoy all the key features in major cities.

The Freedom 250 MB plan for instance offers up to 100 minutes of nationwide calls.

The Pros and Cons of Freedom Mobile Packages

As you can see from the examples above, Freedom mobile has a mix of packages. These packages make Freedom Mobile a good choice for most people.

If you are thinking about getting Freedom Mobile, you should also consider their phone offers.

Freedom Mobile also offers some of the best plans for modern phone brands.

Some of the phone brands you can acquire under Freedom Mobile include Apple, Samsung and LG among others.

Freedom Mobile MyTab- What is It?

If you are purchasing a phone on Freedom Mobile, you have to pay an upfront amount.

This amount is referred to as your “Tab.” You can get some phones on Freedom Mobile without paying any amount upfront.

Is Freedom Mobile Any Good in General?

Generally, Freedom Mobile is a good carrier. Given that it is the fourth-largest provider in Canada.

It has made some ground in offering value and improving service. The provider has plans for all and has partnerships with local carriers across Canada.

You can be sure that you will have access to signals in almost all territories.

When Freedom Mobile was launched, it did not have good reception. However, continuous investments by the company have improved its coverage.

The coverage is getting better across the country.

Based on this guide, Freedom Mobile is good for:

Freedom Mobile is not Ideal for

If you are wondering if freedom mobile is good, you have your answer.

The beauty of Freedom Mobile lies in its pricing. The network offers some of the best rates across Canada. It has better rates than the top 3 providers.

With that said, Freedom Mobile has its shortcomings. It still lacks sufficient coverage in some regions. If you live in cottages and rural areas, you may want to opt for something else.