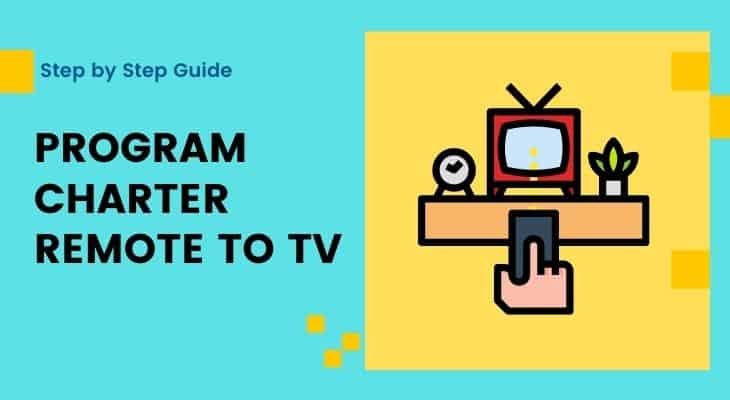 Are you trying to find the best guide on how to program charter remote to TV? Perhaps you’re in the search for the different charter 4 digit remote codes or Spectrum remote codes RC122?

Should you be in dire need of these, you are just where you need to be!

Today, we will be teaching you how to program Spectrum remote URC1160 to your television in the easiest and fastest ways possible!

You can program your charter remote to your TV by ensuring that you have the correct and appropriate TV manufacturer device code. Once you have it, activate or turn your television on.

Hit on the [SETUP] and [TV] buttons simultaneously until you see the LED blink two (2) times. You’ll then be prompted to type the code in, and that will be it!

That’s the quick lookup on how you can proceed to program your charter remote to your television. We’ll give you a free in-depth and detailed guide below!

Before that, though, do you know the reason why you need to program your controller?

Why You Need to Program Your Charter Remote Control

You might think that programming a remote control isn’t actually necessary, but actually, it is a need.

Universal controllers need to be programmed before you can use them. The reason why is because you wouldn’t be able to control your television with it!

If the remote control you have isn’t the one that came with the TV; if it’s already a replacement, then for sure, you need to program it.

Should you have a controller that’s from the manufacturer of the TV, you can actually ask them if you still need to program it.

This is because some manufacturers produce and manufacture controllers that are compatible with multiple devices.

Nevertheless, learning how you can get the remote codes is important and imperative. You might not need it as of now, but in the future, there “might” come a time when you will.

What are Charter 4 Digit Codes and Spectrum Remote Code RC122?

For you to be able to successfully program your Charter or Spectrum remote to your television, you need to get a hold of your specific TV code.

This TV code is like the DNA that separates and differentiates “your” specific device model from others within the same manufacturer and brand.

There are thousands of codes out there. But, finding one isn’t actually like how Finding Nemo went – it’s all going to be just like a walk in the park!

This code in question is going to be part of the procedure, which you will need to provide in one of the steps of programming your zapper to your television.

There are a few ways on how you can find the program charter remote codes that you need to input on your television, the most customary two include:

The Manual or the Box

Many people aren’t aware of it, but the user manual or the box that came with the television contains the code for it.

So, if you’ve stored and stacked them somewhere, try looking for them real quick.

For sure, it is somewhere in either of those locations, so don’t lose sight of where those are!

NOTE: Some manufacturers might have it mixed up with a couple of other characters, so take note of the number. It’s just going to be a total of four (4) digits.

Spectrum, under Charter Communications Inc., was able to come up with a Code Finder to ease the finding of these codes.

In the most basic sense, it is a tool that you can use to find the respective codes for your specific television (model and make).

You can find and use the Code Finder by accessing it here. Just go and follow through the guided prompts!

Furthermore, you can also do a Google search by looking for the model and the brand of your TV; you should be able to find it.

Now that you know where you can find these program charter remote codes, let’s get onto the programming part!

The Guide on How to Program Charter Remote to TV

Should you be in need of a guide that can help you in programming your zapper to your device, just follow these easy-to-understand and simple steps!

What we will be detailing are two (2) methods and ways on how you can program Spectrum remote URC 1160 or your Charter remote: The Manual Method and the Search Method.

Here’s the manual process or method on how you can program a Charter or the Spectrum URC 1160 controller.

The first thing you have to do is to make sure that your television is turned on.

Many people ask this question; and to put an end to all the fuss, yes, the TV would need to be turned on for this matter.

Once your television is turned on, hit on the [TV] button one time. After that, press and hold [SETUP] until you see the LED blinker blink two (2) times.

Do you remember the 4-digit code we were trying to tell you about? This is where you’ll actually be using it!

You will know that the code is correct when the blink that the LED blinker emitted was short and plain. If it’s a long blink, that simply means that the code you’ve input is incorrect.

When this happens, try out different codes until you get the correct one.

After the successful (blink), what you have to do is to point the zapper on the TV and hit on the [POWER] button; the television should turn off or deactivate.

Make sure that you’re near the sensor because you can only click and hit on the [POWER] button once.

It should turn off, and if it doesn’t repeat steps 2 to 3 again.

If you think that the manual method isn’t going to work for you; if you’re not able to find your code, you can try this method, or if the [POWER] button didn’t work, try on this method out!

Step 1: Turn Your Television On

Akin to the manual method, you wouldn’t be able to program your Charter remote to your device if it’s not turned on or activated.

So, make sure that it’s plugged in and that it has power.

On the zapper, hit on the [TV] button once – it shall blink one time. After it blinks, press + hold [SETUP] until the LED blinks twice.

When it blinks twice, you already know that it’s been primed to your device.

What you have to do by then is to enter and the buttons 9 9 1; you should see the [TV] button blink two times.

Step 3: Hit on the [POWER] Button Once

Press on [POWER] and make sure that you’re near so that the sensor will get the action you want to do.

This wouldn’t turn your television off, it’s just preparing for the next step, which will be the finality of the procedure.

After you press on the [POWER] button, what you have to do next is to press on CH+ or channel up continuously until the television deactivates or turns off.

But don’t worry, the IR or Infrared codes will send from the library to the device with the best option first.

Lastly, turn the TV on by hitting on the [POWER] button once again. If it does, press on [SETUP]; that’s how you know that you’ve locked the code in.

If it doesn’t turn on or activate in step 5, press on the channel down button [CH-] until the television turns on.

What this does is it reverts to the codes where it went through. When it turns on, just lock it in by pressing on the [SETUP] button.

If you thought that programming a remote would require you to go into a DOS-based system, think again!

This is how easy it is to program your remote to your television – no hassle!

It’s Not Yet Programmed Properly

So, if you’ve followed all the steps in both methods but you’re still not able to program the zapper, the next best thing to do is to contact Spectrum (if you have the URC1160 first, then your manufacturer if there’s nothing wrong with the controller).

The technical team of Spectrum, or in this case, Charter Communications, Inc., will be able to help and give assistance to you.

If you can’t land on the best and the most extensive guide on how to program Charter remote to the TV, then this guide will be everything you need!