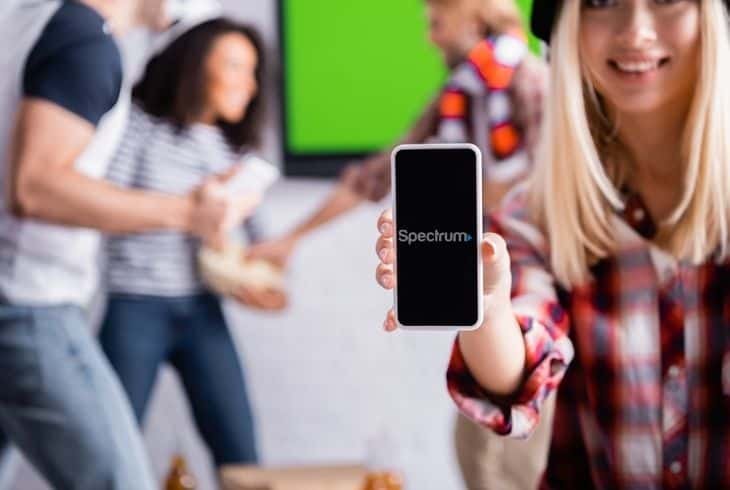 Streaming TV options have never been more flexible, and many subscribers want to know how to cast Spectrum TV app. Spectrum TV accommodates all of the most popular streaming platforms too.

If you already have an IPTV or streaming dongle, accessing content via Spectrum TV is one short download away. Paid subscribers can stream on-demand content from over 200 channels, and Spectrum is constantly adding more content.

Spectrum TV is a paid monthly subscription package. However, you can gain access to 10 channels for free when you sign up for the Spectrum TV Choice package.

Which Devices Are Compatible?

For example, you can stream content via the Spectrum TV app with Roku devices, Samsung Smart TV, Apple TV, Google Chromecast, and even Xbox One.

I do wish the Spectrum TV app was compatible with more streaming TV dongles. However, support for Samsung, Google Chromecast, and Roku devices covers the vast majority of the most popular streaming platforms.

How Do I Cast My Spectrum App to My TV?

It is even possible to use the Spectrum TV app on Amazon Fire Stick devices. Be forewarned, though, because the installation process is not for the faint of heart.

The process isn’t as simple as browsing the app or channel store and finding an easy installation icon.

Instead, the process requires a user to enter the Fire Stick’s Developer Mode.

Typically, any app that requires Developer Mode is untested (usually as a Beta application), which may be incomplete, buggy, unstable, or derived from Apps from Unkown Sources.

At any rate, if you’re up to the challenge and can’t live without Spectrum TV on your Fire Stick, it is possible.

How to Cast from Spectrum TV App

If you have a modern TV, it has USB ports compatible with all the latest streaming devices (Fire Stick, Roku, etc.). If you don’t already have a streaming device, you can get one for less than $30.

Chromecast is one of the more popular methods of casting the Spectrum TV app and is more well supported than the Amazon Fire Stick.

The most inexpensive Chromecast devices are approximately $20, which is far less than a Spectrum TV subscription, too.

Use the following steps to stream Spectrum TV content through your Chromecast device:

Roku is still one of the biggest global streaming providers. As such, it comes as no surprise that Spectrum TV has developed an app for it.

READ ALSO :  Why Is Spectrum Not Working On Roku? Fix Guide

Presently, Spectrum TV supports all Roku devices, including the Roku Stick, though some users have complained that the Roku Stick doesn’t work as seamlessly as other devices when streaming Spectrum TV.

Also, note that having a functioning internet connection for your Roku device is a prerequisite for the installation process, as follows:

Note: Because it is a paid service, you will need account credentials to log in via your Roku device.

READ ALSO :  Why Are My Spectrum Channels Unavailable?

Many users want to know how to cast Spectrum TV from iPhone. However, Apple users have two options: iPhone and Apple TV. The setup requirements for either device are very similar.

You simply need to download the app from the App Store and sign in. But there is one prerequisite. You must first already have a Spectrum TV subscription.

Use the following steps to cast Spectrum TV with an iPhone:

Use the following steps to cast Spectrum TV with Apple TV:

READ ALSO :  Can I Watch Spectrum TV Away from Home? Quick Guide

Solution #4: Stream to Xbox One

The Xbox One Spectrum TV app process is a little different than the preceding steps, because it requires an additional subscription service.

Use the following steps to cast Spectrum TV on the Xbox One:

Note: If you don’t already have an Xbox Live subscription, you may consider spending money on an inexpensive Chromecast or Roku stick.

They are fairly inexpensive and will help circumvent the need for an Xbox Live subscription.

Solution #5: Mirroring from A Smartphone

It is also possible to cast or mirror Spectrum TV from your smartphone or tablet to a TV.

This is not the most ideal solution, however, because many mirroring and casting apps introduce lag and latency into the streaming experience.

Furthermore, most IP streaming devices, sticks, and dongles capable of running the Spectrum TV app are fairly inexpensive. Nevertheless, if you already use a mirroring app, you may find it more convenient to use a smartphone.

READ ALSO :  Why Is My Spectrum Remote Volume Not Working?

Just remember one key consideration. Streaming video and audio is an effective way to eat through your data plan.

For those reasons, I think it’s inadvisable to mirror the Spectrum TV app unless your smartphone is connected to Wi-Fi or you have an unlimited data plan.

Read Next: How To Fix Spectrum Remote Video Source Not Working?

Spectrum TV doesn’t only offer streaming content. If you want to save money, consider Spectrum TV’s bundled packages, which also include internet and home phone service in select locations.

Knowing how to cast Spectrum TV app is simple with modern streaming dongles and USB sticks. Instead of being forced to use old coaxial cable networks, Spectrum TV provides the latest content without forcing you to sign a contract

READ ALSO :  Can I Watch Spectrum TV Away from Home? Quick Guide