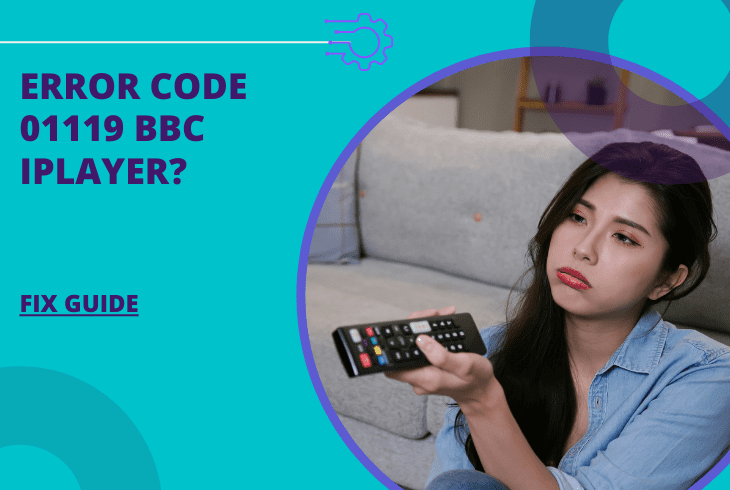 The error code 01119 BBC iPlayer usually appears when you’re attempting to access the content from outside Great Britain.

However, although the BBC services are only allowed from within the UK, sometimes you might experience 01119 error from within.

The BBC iPlayer error 01119 appears when you’re unable to reach the receiver server, and the cause could be related to multiple factors. They include bad internet connection, outdated version or corrupted app data as well as IP address (locational) issues.

Let’s next explore the possibilities in detail to be able to determine the issue!

In case you’re outside of the UK, please jump straight to Solution #4 to learn how to solve the BBC iPlayer error 01119.

In case you’re from within the UK, but error appears, here’s why:

Based on whether you’re within or outside the UK, start the solutions from the beginning or jump straight to interacting with a VPN.

However, it’s important to keep an eye on ALL possibilities since the error 01119 also appears when one of the following bullets is present.

To solve the problem, we’re going to undertake a list of solutions that will address each and every possibility.

It’s important to follow the solution in order to achieve best effect in the troubleshooting and not lose any time. With that being said, let’s jump right in!

It does not matter whether you’re using a Smart TV, your smartphone or viewing BBC iPlayer online, the best first step is to restart the device.

By doing so, we’re going to refresh ALL operational services, including the internet connectivity, and BBC iPlayer application.

When you turn the device back on, jump into the BBC iPlayer application and test whether everything is working correctly.

In case you’re using a TV, we strongly suggest unplugging the device from the power to be able to discharge. When you’re ready, test for error 01119.

The application cache of your BBC iPlayer contains information about your sign-in attempts, files, images and other data.

In case you’ve attempted to use the BBC iPlayer while abroad and you’ve received the 01119 error, there is a high chance that the issue will follow you home.

This is why we need to completely erase the cache data on your BBC iPlayer device!

On iPhones, you can only offload the app, from Settings > BBC iPlayer app > Offload.

When you’re ready, you can reopen the application.

You’ll immediately notice that you’re signed out of your account, which is the prime indication that the data has been cleared.

It’s now time to proceed with the networking part of this guide.

As we’ve already mentioned, the primary reason why error 01119 appears on BBC iPlayer is due to a failed connection.

There are a few possibilities here. The connection can either fail due to issues on your side or because the server access is restricted or not accessible.

We’re going to discuss the limitations in the next solution, so for now let’s make sure that the issue is not on our side!

Make sure that you complete each of the bullets above!

Well, in case the BBC iPlayer app is not working on ALL devices in your home, move straight to the next solution.

In contrast, if other streaming applications are also unusable, perhaps there is a problem with your internet connection. It could be only the WiFi or your internet data income.

Your Internet is Down?

In case you’ve identified that the issue is coming from your internet, there is no need to proceed further, instead deal with the problem.

As we’re arriving at the most important solution in this guide we need to explain a few things first.

The reason for the problem could be double-sided, when you’re using a VPN.

What that means is that when you’re within the UK, you need to remove any active VPN from your browser, smartphone or even television device.

The Virtual Private Network (VPN) can be a browser extension or background working application on your BBC iPlayer streaming device.

How To Remove VPN?

When you’re within the UK, to fix the error code 01119 BBC iPlayer you need to go to Settings > Storage/Apps and select any installed VPN app.

Then you should proceed with Uninstalling or temporarily Offloading the application. Once you’re ready the BBC iPlayer 01119 error is gone!

How To Use VPN:

In case you’re currently located outside the UK but you still want to access BBC iPlayer content, you’ll need to install a VPN first.

Once you install the browser extension or app, simply connect to a UK server (IP address) to access BBC iPlayer from within the UK. That will lift the limitation.

Tip: To download and install a VPN, scroll on the bottom of the guide!

In case you’ve reached that far in the guide, perhaps the issue is coming from the application itself.

While this happens rarely, when you’re using an outdated version the error 01119 could appear as a result of a failed connection.

Lucky here we’ll learn how to update the app!

The best way to make sure that BBC iPlayer is up to date, is clean reinstallation!

All you need to do is erase the application from your device, completely, after which download the software from the app store.

The fresh start could be what you’re missing and the error might disappear like magic. It’s only important to clear the app first and not only to update!

When you’re ready sign-into your BBC iPlayer account and test whether error 01119 appears!

Is BBC iPlayer Currently Down?

In case you’ve attempted everything in this guide but nothing managed to help, perhaps the problem comes from BBC iPlayer.

Sometimes their services might temporarily drop for certain locations in the UK, and you can visit the official social media handles of BBC iPlayer to check.

Hence, when BBC iPlayer error 01119 appears, the software can’t connect to the response server. We’ve learned that to solve the problem we need to solve issues on the outside and use a VPN when outside the UK or disable an active VPN when we’re within.

Now that we’ve learned why error code 01119 BBC iPlayer, we can easily solve the problem, in case it’s on our side.

However, the most important thing is that now we know how to use a VPN to bypass restrictions, especially when we attempt to access UK content from abroad.

What VPN Should I Use?

Our top recommendation would be to use Atlas VPN, to be able to access BBC iPlayer when you’re outside the UK.

This can also help bypass other limitations and acquire access to content that you weren’t able to discover before.