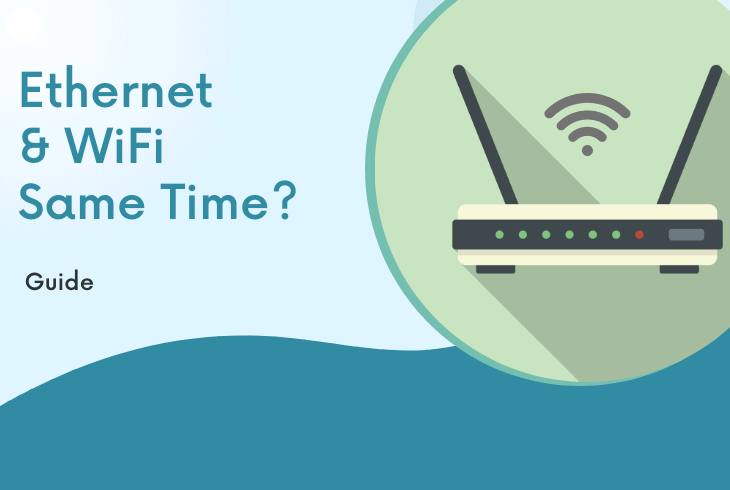 A lot of people are asking and wondering, can I use Ethernet and WiFi at the same time?

Would it be possible if I use these two (2) types of connection without experiencing any problem?

In this guide, we’ll discuss if it’s possible to use both wired and wireless connections simultaneously.

Not only that, but we’ll also give you an idea of what happens to your device if you connect it both wired and wirelessly.

Yes, it’s possible to use Ethernet (wired) and WiFi (wireless) at the same time on your laptop or computer. However, it is not something that you could do to increase the speed of your internet or make the connection better.

Can I Use Ethernet and WiFi at the Same Time?

To answer this in a short and simple manner, yes, it is possible to use Ethernet and WiFi at the same time on your device.

There’s never a rule that restricts you to only using one (1) type of connection.

If you have your router/hub close to your laptop or computer, you can connect the devices together via an Ethernet cable.

Furthermore, if your device has WiFi capability, you can use it as some type of backup, too.

Would Using Both Connections Make Your Internet Speed Faster?

Many people think that using an Ethernet cable (wired connection) with WiFi (wireless connection) would make their connections faster, when, in reality, it does not.

In fact, it could be the other way around.

Using both Ethernet and WiFi at the same time had never proven faster internet speeds. It doesn’t work like that.

There are a couple of reasons as to why your internet connection could be slower than usual – and using both WiFi and Ethernet are not the answer to remedy this.

The Speed of Your Connection

One of the primary factors of your speed would be the package of your internet connection. This will be based on how much you’re paying for it monthly.

For instance, if your package is a subscription to an internet plan that’s just 50 Mbps per month, don’t expect your speed to double when you use Ethernet and WiFi simultaneously!

Another thing to note is the strength and the features of your router.

Nowadays, most routers have been optimized to offer tremendous speeds, thanks to some of their newer and more modern settings and configurations.

Last, but most definitely not least would be the weather. On rare occasions, the weather could also be a culprit on why your internet speed is slower than usual.

And using both Ethernet and WiFi could not remedy this situation when it arises.

These are the things that would be of influence on your internet connection’s speed, not the connection type (wired and/or wireless).

What Happens When You Connect Ethernet and WiFi at the Same Time?

Can I use both WiFi and Ethernet at the same time? – Definitely! But if it’s not used to speed up your connection, what exactly do you use it for?

What happens when you connect your device to both wired and wireless connections?

Even if you’re able to use both connections, computers would still prioritize using one (1) connection over the other.

On your computer though, each connection will be assigned a different IP address for uniqueness.

From the user’s end, this screams a slower and a much more sluggish connection because the bandwidth will be divided and shared.

This is contrary to what most people believed in that connecting both simultaneously speeds or rapids the connection up.

Would Using Both Slow Your Connection Down?

In theory, using both simultaneously would slow your internet down because the data packets sent and received by the router could be mixed up, duplicated, or the worst – they could be incorrect.

That being said, your computer could possibly have a hard time processing the information that the router gives because of the 2-way process it’s getting (wired and wireless).

How to Use Ethernet and WiFi at the Same Time?

So how do you use WiFI and Ethernet at the same time? Before we go through that, it’s important to note that your device needs to have at least two (2) adapters.

This often applies to desktop computers.

For laptops, on the other hand, most of the ones we have today already have built-in LANs and WiFi adapters, making them compatible with both.

You’ll just have to change up its settings for it to detect wired and wireless connections simultaneously.

Follow these steps to be able to use your Ethernet and WiFi simultaneously.

If you’re using a laptop, then you shouldn’t have any problem with this.

NOTE: This process is effective for Windows 7, Windows 8, Windows 8.1, and Windows 10 devices.

That’s it! That’s how you can set your computer up to work with both Ethernet and WiFi at the same time.

If you are a Windows 10 user, there’s a feature you could use to bridge the connections smoothly, allowing you to do it simultaneously.

Do note that this feature is only applicable starting from Windows 10.

To do this, you simply have to go to the Control Panel > Network and Sharing Center.

From there, click on Change Adapter Settings. Lastly, choose the adapters you want to bridge, – Ethernet and Wireless – save the changes, and then hit on Apply.

So, in case you’re wondering whether or not you can use both Ethernet and WiFi at the same time, you can! You simply just need to enable both on your computer or laptop.

Read Next: Does My Motherboard Have WiFi? How Do I Know?

With our guide, you’ll no longer be unknowledgeable of how you can use your connections on your PC or laptop!

You neither have to be an expert nor a professional to know how you can do it.

Keep our guide handy so that the next time you ask, can I use Ethernet and WiFi at the same time, you’ll know where to get that information from!