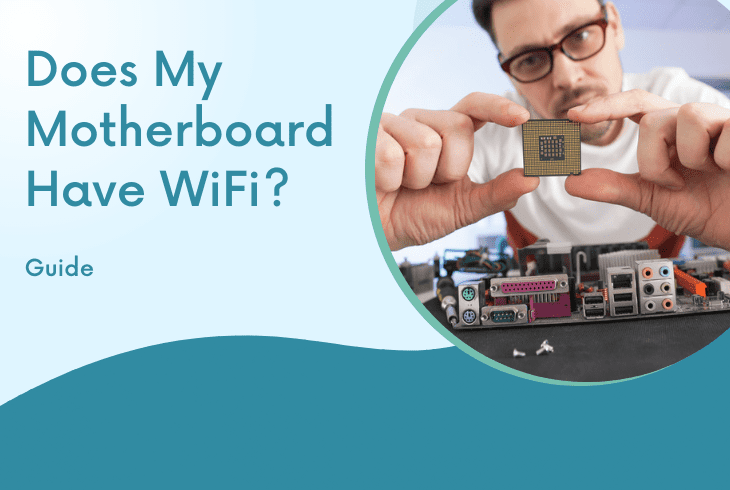 One of the questions often asked when building a computer is, does my motherboard have WiFi?

It’s a common feature in motherboards nowadays, and it does give you the option of connecting to the internet wirelessly.

It’s much more convenient than wired, and it’s great to have especially if you want to position your computer farther away from the router.

Not all desktop motherboards come with built-in WiFi. Most of the time, a budget board won’t have one. However, one on the higher end of the budget range will usually come with WiFi built-in. Manufacturers do offer different variants allowing you to choose before you buy.

With desktop motherboards, you can be sure that they will come with at least an Ethernet port for a wired connection.

READ ALSO :  How to Get Free Internet in Rural Areas?

However, it’s still worth checking as there are boards that come with built-in WiFi. On the other hand, laptops do come with wireless capability out of the box.

Does My Motherboard Have WiFi Built-In

These two are completely different things. Modern boards often come with a wireless adapter right on the device. If you have a compact PC or get a high-end model, there’s a good chance the WiFi will be built-in.

One thing to note with motherboards with built-in WiFi is that they will be more expensive than those without.

So, if there’s a board that comes in two variants, the one with wireless capabilities will be a bit more expensive.

You might be wondering, does my motherboard need to be WiFi enabled to have a wireless device?

READ ALSO :  How To Fix Ubee Port Forwarding Not Working?

If you discovered that your board does not have wireless connectivity out of the box, you could always use an expansion WiFi card.

These WiFi adapters come in USB or PCIe form, so no matter what your system is, you will give it wireless connectivity. You will have to spend a little extra to get it.

What Types of Motherboards Will Have Built-In WiFi

An average desktop motherboard, especially one on the budget end of the price spectrum, is not likely to have built-in WiFi.

However, there are some exceptions to this, you will have to look for them as not all models will have a WiFi variant. High-end to premium motherboards will certainly come with WiFi.

Smaller-sized boards like mini-ITX ones will likely have built-in WiFi since they have fewer expandability options.

They might not have the extra slot to put in a wireless adapter. That’s why manufacturers will usually have them available.

Advantages of Motherboards with WiFi

If your motherboard has WiFi, you get some advantage over those that don’t.

In contrast, everybody says that a wired connection is still superior, little that separates it from wireless.

1. WiFi Speeds Are More Than Enough

Current WiFi speeds should be more than enough for the average user. Ethernet will give you a bit more stability, but they are pretty much the same when it comes to bandwidth.

You will not even notice the difference between Ethernet and WiFi for normal tasks like browsing, streaming, and even gaming.

READ ALSO :  How to Find the Right ISP for Your Home?

Unless you are running a server or have a NAS setup at home, the speeds and connectivity the latest WiFi technology offers should be enough.

Built-in WiFi is great if you want to connect to a large network like an office or a big home.

Routers only have a limited number of LAN ports that will be used by devices such as servers.

Connecting a lot of devices to the network physically is going to be more expensive than getting a decent WiFi or mesh router.

Wireless is the better option for large networks as it will be easier to troubleshoot when issues arise.

Not all desktops will be portable, but if you have a small form factor build, having built-in WiFi is definitely going to be a plus.

READ ALSO :  Can Someone Hack into My Phone Through Wifi?

You will be able to take your computer anywhere without having to look for a free Ethernet cable so you can connect to the internet.

Connecting wirelessly will eliminate a few extra wires in your workspace. You will not have to deal with unsightly Ethernet cables that run from every device to your router.

If you have a desktop with WiFi, you will generally have a much tidier workspace.

Why Most Motherboards Don’t Have WiFi

Getting a motherboard with built-in WiFi is generally more expensive.

If you are on a tight budget and do not have to deal with large networks, opting for wired connectivity can be the more economical choice.

You can also get a PCIe WiFi expansion card if you choose to go wireless at some point in the future.

READ ALSO :  How Fast is NASA Internet and NASA WiFi?

The upgrade will be a lot cheaper than getting a motherboard with built-in WiFi.

A disadvantage of getting a motherboard with WiFi is you might have a hard time replacing or upgrading it.

You will need to think about this if you want to use your computer for the long term.

WiFi technology has changed so much over the past years that it is significantly faster and better than 5 or 10 years ago.

In today’s case, if you have a motherboard with WiFi 5, upgrading it to WiFi 6 is going to be hard or even impossible.

There are several use cases where WiFi will not be viable due to performance. Yes, WiFi is fast and reliable, but if you use it for your server or NAS, it will not cut it.

READ ALSO :  Can A Wifi Router Get a Virus? Fool-Proof Guide

Gamers and professionals with a high network demand will often use Ethernet rather than wireless. However, WiFi should be enough if you are not a power user.

Does My Motherboard Have WiFi? How to Know

The easiest way to check if your motherboard has WiFi is to check the back I/O panel. If you can see antenna connectors, your board comes with built-in wireless networking.

There are rare instances of a board with built-in WiFi but does not come with these connectors.

If this is the case, it’s better not to use it since it might suffer from connectivity issues. You can always get USB or PCIe adapters if you want to use wireless.

READ ALSO :  Can You Have Two Different Internet Providers In One House?

If you are still shopping for a motherboard, it’s essential to read through the specs before getting it. Spec sheets are available from the manufacturer or retailer website.

You can also read through product reviews and enthusiast websites to know if the motherboard you are eyeing comes with built-in WiFi.

The model name will also give you a clue if a motherboard comes with WiFi. Those that have it will usually have AC or WIFI in the name.

If you got a pre-built computer and want to check if it comes with WiFi capabilities, you can quickly check it using Device Manager.

It’s an easy and quick process, and everything you need to know should be under the Network adapters tab.

Here are the steps to check if your computer comes with built-in WiFi via Device Manager:

Note: If none of these appear, it is likely that your computer only comes with an Ethernet adapter, and you will need a wired connection.

Read Next: How to Get a Stronger WiFi Signal from My Neighbour?

Thus, the quickest way to know if your motherboard has WiFi is to check the I/O ports on the rear. If you see antenna connectors, your board comes with wireless networking capabilities. To confirm, you can always look for it in Device Manager, as a WiFi adapter will be listed there.

Does my motherboard have WiFi? If you are shopping for PC components or have just gotten one, this is one question that will surely cross your mind.

Having a wireless connection is more convenient than having a wired one.

If you are looking for a new motherboard and want wireless connectivity, ensure you get one with WiFi pre-installed.

Do quick research by reading the specs sheet, as manufacturers will list it down.