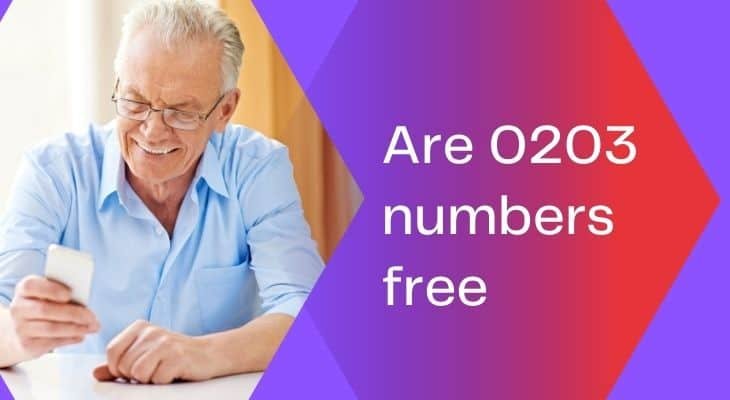 Are 0203 numbers free? If you’re living in the UK, you may have stumbled upon the 0203 number prefix. Although it’s relatively new, it’s still a widely used code in the country.

Most businesses now get this rather than its closest siblings – 0207 and 0208. So, wondering whether you can call them without charge is understandable.

Unfortunately, calling numbers that begin with 0203 isn’t technically free. You’d need to pay an access charge, as well as a per-minute rate. But you can phone these numbers without charge if you have enough minutes left in your mobile plan.

Here, we’ll discuss everything you need to know about this number code. We’ll tell you its brief history and why businesses are now shifting to this prefix.

On top of that, we’ll also tackle whether you can make free calls depending on your cellular network provider.

READ ALSO :  How to Turn Off Vodafone Secure Net Easily

The 0203 is an area code specific to the UK’s largest city – London. It has a colorful history and emerged from the 020 district prefix.

Before it rolled out in 2005, people only used its 0207 and 0208 siblings. The former is known as the prefix for inner London, while the latter is only for its outer areas.

However, the demand for more landlines in the UK occurred due to its thriving industries.

Several businesses opened, and more homeowners began signing up for a broadband connection.

But out of these three possible prefixes, getting the 0203 code is a far better choice.

Why Are People Getting Phone Numbers With 0203?

Unlike the other prefixes, the 0203 area code covers both the inner and outer parts of London.

Landlines that begin with this are also mainly for personal or business use. But before we tackle whether you can phone them for free, let’s first discuss what makes this code popular.

Since 0203 covers the entire London, customers can easily mistake them as an inner-city landline. Thus, such businesses will look more recognized and respected.

Apart from this, here are other reasons why people are slowly getting this number.

As we’ve said, the 0203 code makes your landline seem like it’s from the inner part of London at a much lower cost.

Because of this, your residence or business can gain more presence and appeal from the public.

It’ll make them look more impressive and desirable without needing to pay a lot.

Apart from being more affordable, 0203 landlines are more popular to London residents.

3. Many respected institutions use this number

Lastly, many respected institutions use landlines that begin with this prefix.

Popular organizations like the BBC, The Guardian, Transport for London, and the Bank of England use these phone numbers.

Most residential areas and businesses in London have landlines that begin with 0203. It’s not surprising given its many benefits to its users.

So, wondering whether we can call them for free is quite understandable.

Unfortunately, standard rates apply when calling these landlines. There isn’t a fixed fee for it because it would depend on your cellular provider’s rates.

You’ll also need to pay an access charge on top of that. For instance, Vodafone, EE, and O2 charge you differently. We’ll tackle them more in the following sections.

But there are some instances in which you can phone these numbers for free. If you have enough mobile minutes on your plan, you won’t have to worry about paying a single pound.

Apart from this, you can also make free calls if it’s part of your landline contract.

EE is one of the leading cellular providers in the UK. It has among the most affordable and accessible mobile plans in the market today.

Thus, many homeowners and businesses have signed up for their deals. Because of this, we are left with the question, Are 0203 numbers free on EE?

Since calling 0203 numbers isn’t technically free, you’ll need to pay a fee when using an EE mobile or landline.

READ ALSO :  How to Get Vodafone Proof of Purchase Quickly

They have a 44p access fee and a 30p per-minute rate. Hence, you’ll be paying 74p for your first minute and 30p after for every inclusive minute.

But as mentioned, you can phone 0203 numbers without any charge if you have remaining minutes on your plan or bundle. Otherwise, you’ll need to settle with EE’s standard rates.

Are 0203 Numbers Free on Vodafone?

Vodafone is another popular cellular provider in the country. Despite their exciting mobile deals, you also can’t call 0203 landlines for free unless you have spare minutes left on your plan.

If you’re a Pay as you Go customer, you’ll need to pay them 60p for the first minute of your call and 30p for the remaining minutes.

READ ALSO :  How to Fix Three Mobile Data Not Working?

Meanwhile, they charge their Pay Monthly users £1.10 and their landline customers 30.5p per minute.

Like EE and Vodafone, O2 also has some of the hottest mobile plans and exclusive rewards for their customers.

However, they charge you an access fee and a per-minute rate. You can use your Pay & Go rewards bundle or spare minutes if you want to make calls for free.

Thus, it’ll cost Pay & Go customers around 60p for your first minute and 30p for the following minutes of your call. Meanwhile, Pay Monthly need to pay 35p for every minute.

Are 0203 Numbers Free on Three Mobile?

Three Mobile is the nation’s fourth-largest cellular provider. And part of their mobile deals includes monthly allowances for calling landlines that begin with 02.

With that, you can call 0203 phone numbers without any charge.

But like the previous network providers, you’ll need to pay a standard fee if you go over your allowance. I

f you’re an Essential or Advanced plan customer, your per-minute rate will cost you 35p.

Pay as you Go users, on the other hand, only need to pay 3p for every minute of their call.

Will Calling Numbers That Begin With 0207 And 0208 Cost Me Anything?

Your cellular provider will charge you with rates similar to what we’ve mentioned in the previous section.

For instance, EE will charge you a 44p access fee and a 30p per-minute rate. O2 will also make you pay 30p or 35p for every minute of your call.

Likewise, Vodafone charges 30p or 30.5p if you’re a Pay as you Go or landline user, respectively.

Meanwhile, Three Mobile gives you a monthly allowance, allowing you to call 0207 and 0208 landlines for free. But if you eat up your credit, you’ll need to pay 35p or 3p per minute.

Moreover, you can call these numbers without any charge on EE, O2, or Vodafone if you also have enough allowance on your plan.

What Numbers Are Truly Free?

The only way to make calls to these landlines for free is by having spare minutes on your mobile plan or bundle. So to put it simply, 0203 aren’t truly free-to-call numbers.

However, there are freephone numbers available across the UK. These hotlines won’t eat up your mobile plan’s minutes and won’t cost you anything.

It also won’t matter whether you’re using your smartphone or landline.

Let’s Call It A Wrap!

The 0203 code has had a colorful history. It emerged many homeowners began getting a landline bundled with their broadband and TV package.

READ ALSO :  Vodafone Student Discount : All You Need to Know

The thriving business sector in the UK also resulted in its high demand. Thus, wondering whether it’s possible to call these relatively new numbers for free is natural.

As we end this article, we hope we provided enough information to answer the question, Are 0203 number free?

Remember that calling such phone numbers will incur both an access charge and a per-minute fee.

On top of that, your total cost would depend on your cellular provider’s rates.

Read Next: Can you transfer your phone number to same network? Check it out!