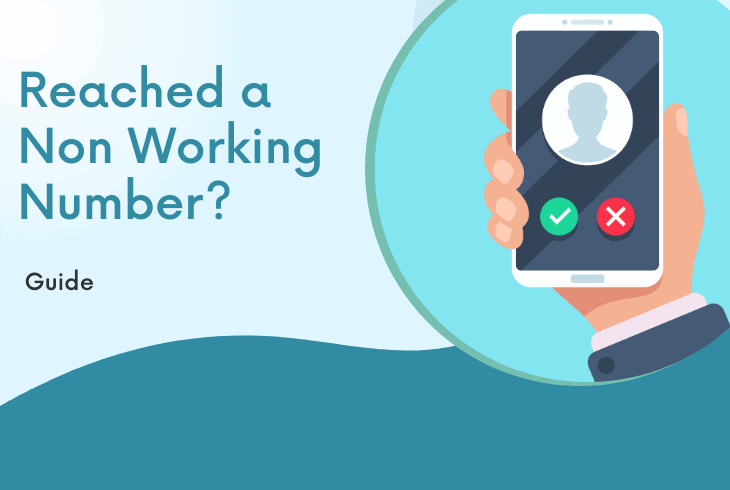 There are times that you will get a message such as “You have reached a non working number? Well, what does it mean?

You will get a ton of calls during the day, and for some of those, you really will like to call back.

It’s simple and fast and can get your message across to family or friends quickly compared to text or online messaging.

When you get the “reached non-working number”, message as you are making the call, the main reason is that there is something wrong on the receiver’s end. It’s likely a misdialed number, so double-check the number you typed in. It’s also possible that the number was discontinued, not allowing you to contact it.

Why Did You Get a You Have Reached a Non Working Number Message?

The “You have reached a nonworking number” is a message developed to let you know that the number you dialed is not available or not owned by a person.

Technically, no one uses this number, and you will not be able to connect to it.

Now, this is all fine. However, it becomes a problem when you dial a number in your recent call list or already on your phone, and this is the message you hear.

So, what’s up, and why did you get a call from this number in the first place?

Let’s look at the different situations that can prompt this intercept message to know the next steps to take.

What Does “You Have Reached a Non Working Number” Mean

A few reasons will give you the “You have reached a non-working number” message.

Some could be attributed to you, but it’s an error on the receiver’s end for the most part.

The Number You Dialed Has a Typo

It happens. Especially if you dialed the number using the keypad on your smartphone. It’s easy to misclick a different number and dial an entirely non-existent one.

Your finger can easily slip since there are no physical number keys. It’s also possible that there is a missing digit somewhere.

Don’t worry if you hear this particular intercept message, as you can always check out the number that you dialed if it’s correct.

To avoid this in the future, it’s best to dial from your call list or phonebook so you are less likely to make a mistake.

You Dialed a Number with an Incorrect Area Code

For most of the phone calls you are going to make, you will need to input a prefix or an area code before the number.

There are some exceptions, though, like if the person you are calling is from the same city as you.

However, if you are dialing someone from a different city or state, entering the area code is necessary.

So, make sure that you input the correct area code of the number you are calling. Entering a different one can result in receiving this message as you make the call.

The good news is that you can easily verify if you dialed the wrong area code on Google.

You can do a quick search to confirm the code in a few seconds allowing you to make the changes and dial the right number.

For the most part, the “You have reached a non working number” is all about your call not getting through because the number is unavailable or not in use.

One of the reasons that this message can happen is due to overloaded phone lines.

This can happen in a number of ways, particularly when there is a lot of call volume at the specific time you dialed the phone number.

Another reason this can happen is if the person you are calling is moving their number to a different carrier. It is possible that the process has not been completed, and that’s why you are getting this intercept message whenever you call them.

So, what do you do in the case that it’s due to overloaded phone lines? The solution here is to wait it out. Retry calling after some time.

Generally, you will want to wait for a couple of minutes before redialing. If that doesn’t work, try a much longer wait of a few hours.

At this point, it’s best to contact the one you’re calling using a different medium like instant messaging.

You Dialed a Discontinued or Canceled Number

Another reason why you get the “You have reached a non working number” message is when the owner discontinues or cancels the number.

It’s not that they blocked you, but there are some strong reasons to suspend or cancel their number.

Some people change numbers because they receive too many spams or robo calls. These can certainly get annoying, so they choose to use a different number, so they do not get these types of calls anymore.

A phone number can also be canceled if the subscriber has not paid their bill for quite some time.

The carrier can put their number in a sort of limbo status until they pay the balance of the account. During this time, you will not be able to contact their number.

If you have an urgent need to contact them, you can do so using different methods like online messaging.

The Number is from a Telemarketer

If you received a call from a new number and get the intercept message when you call back, there’s a good chance that it’s from a telemarketer. They may be trying to sell you something, answer a survey, or get feedback.

You might be thinking that they have already called you, but you can’t call them back. The reason for this is that most of these types of calls use a switchboard that’s limited to outgoing calls.

They don’t accept incoming calls, and that’s why you get this message whenever you call the number back.

However, in the case of large enterprises, they do provide a single number to contact them.

If you suspect that the number that called you is from a telemarketer, the next time they call, it’s best to ignore it and not answer it.

So, if you do not want to receive calls from these unwanted numbers, you can add yours to the National Do Not Call Registry.

It’s a Spam or Scam Number

Receiving calls from telemarketers is fine, but what you really have to look out for are spam or scam calls.

They will use similar techniques like a switchboard or PABX extensions, but these have more potential to be dangerous.

If you get suspicious about certain numbers calling you, and you’re unable to call back, report these to your carrier so they can block them from using the network.

Your best course of action will be to ignore that number and not answer it whenever it calls back.

Read Next: How to Get Back a Deactivated Phone Number Easily?

What to Do Next?

If you get the intercepted message “You have reached a non-working number,” don’t panic. The issue will likely be on their end, not yours.

If you know the person, double-check the number you dialed. You might have misclicked one of them. However, if the number is new, it might be a telemarketer or a scammer, so it’s best not to pick it up.

The “You have reached a non-working number” is a message you don’t often get when you call someone.

It may mean several things, but most of it will likely come from telemarketers. You can always do a quick Google search to confirm the business calling you.

However, if it’s from someone you know and, in your phonebook, it’s possible that they moved to a different network or they simply canceled that number.

If the number you are calling does not connect, there is really nothing you can do about it.