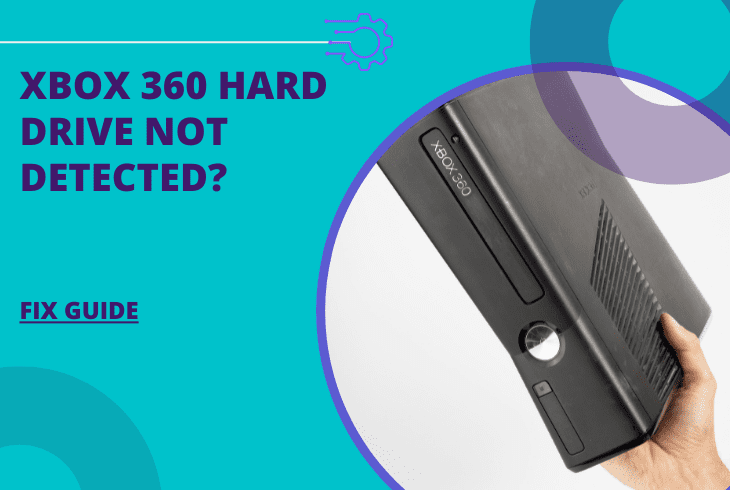 In case the Xbox 360 hard drive not detected there is an easy way to check why!

The hard drive of the Xbox 360 is connected to the motherboard via 2 cables – SATA (data) cable and a power cable.

When one of these connections is interrupted or not connected at all, the console will not be able to recognize and utilize the hard drive storage.

When Xbox 360 won’t detect the hard drive, users need to perform a power cycle and only then, open the device to access the hard drive. Then, both the data and power cable should be disconnected and the entry ports cleaned for the HDD storage to work.

When the hard drive of your console is not being recognized, thus not detected, there are specific ways to know for sure.

Since your Xbox 360 can usually work without a hard drive, some users who only use disk and do not download applications may not notice at all.

Here’s how to detect an issue with the Xbox 360’s hard drive:

If your Xbox 360 has some or all of these symptoms along with the warning messages, then there’s an issue with the hard drive.

Here’s how you can resolve HDD issues with your Xbox 360 in easy steps:

How To Fix When Xbox 360 Not Recognizing Internal Hard Drive?

If your Xbox 360 doesn’t recognize the internal hard drive that comes with the console, there most likely is a problem with the cable connections.

However, there are plenty of easy solutions that you can follow to resolve the problem, so keep reading!

Here’s what to do whenever your Xbox 360 doesn’t detect the internal hard drive:

It is possible that this problem has occurred as a result of a power outage or malfunction with the console’s power supply.

If that’s the case, a power reset on the console will discharge the device, restart ALL hardware components, and make the HDD detectable.

Follow these instructions to perform a power reset on your Xbox 360 console:

Note: Keeping the device OFF for longer provides a better power cycle!

Luckily, Xbox 360 has made it possible for you to remove and install the hard drive really easily.

The hard drive is accessible on the back of the console and by reinstalling the unit, you will be able to resolve the issue with the device.

Here’s how to reinstall your Xbox 360’s hard drive in easy steps:

Note: You must have an application or a game downloaded on the console’s HDD to test if the problem is fixed.

A thing that nobody likes about consoles is that they gather a lot of dust over a short period of time and there is not much that you can do about it.

That dust can either make the console overheat, crash or cause HDD issues like the ones you’re experiencing.

Since you already know how to take out the Xbox’s HDD, follow these instructions to clean the device correctly:

Alert: It’s really important to make sure that the entry of the hard drive is not obstructed and that the power & data cables plug all the way in.

In case it’s possible, you should just format the hard drive. When the Xbox 360 hard drive not detected, it may be impossible for the users to format the dis.

But when the problem is a software bug, the format may be possible.

If you can still find the “Erase” option in the settings, format the hard drive!

Here’s how to format your hard drive in easy steps:

Alert: An erase is going to delete everything from your Xbox 360 hard drive and the changes will be irreversible. This also applies to settings and features.

Solution #5 Get a New Hard Drive

Unfortunately, you’ve tried most of the things that can get your hard drive working and detected by the console.

In most cases with technological devices, once the HDD stops being detected, it’s a prime indication of a faulty unit.

In that regard, you should get a new hard drive for your console or use your Xbox without a hard drive.

Yes, it is possible, you can play offline games on your Xbox (through a disc), without downloading them from an online store.

They will only be temporarily stored on the RAM memory of your Xbox, without getting permanently installed onto the console.

In general, it all depends on the size of the HDD storage.

You will have to get a specific unit that matches the compartment of your device.

Here are the price ranges for all HDDs available for your Xbox 360:

Note: Keep in mind that these price ranges are general options. You can find a second-hand hard drive for even less money.

How To Fix When Xbox 360 External Hard Drive Not Detected?

Xbox 360 can work with external hard drives, as long as they are made to work with a console as well.

Your external hard drive must have a USB port that can connect to the Xbox and work in sync.

Here’s what you can attempt whenever Xbox 360 doesn’t detect an external hard drive:

You can re-format and search for the external hard drive at System > Storage > “Configure Now”. If an HDD is found (externally connected), it will appear under the “Storage” tab.

Tip: When the external hard drive is not being recognized, sometimes all it takes for the device to work is a restart on the console!

Hence, the hard drive of the Xbox 360 is not being recognized because the cable connections are faulty or the drive is dead. To find out what the problem users need to open the console, clean the ports, and secure the cables. Then the cause will be clear!

Read Next: Xbox 360 Controller Not Charging?

Now that we know why the Xbox 360 hard drive not detected, users can easily determine whether they can fix the console or replace the entire drive.

The HDD storage of the consoles is the component with the fastest amortization and is also, most frequently replaced.