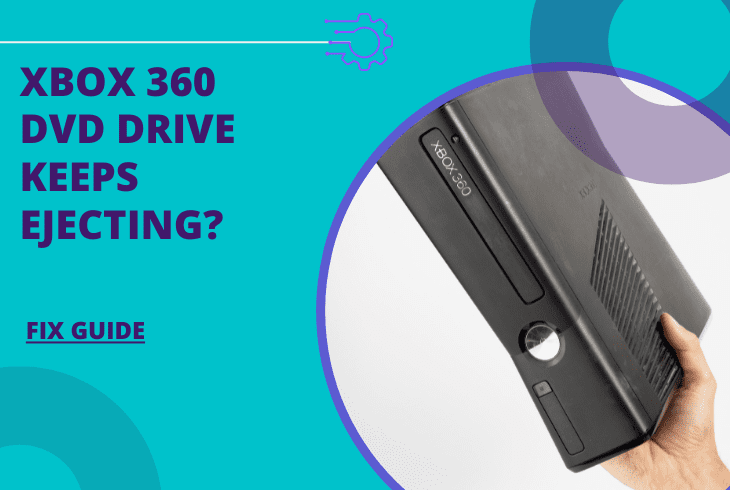 When the Xbox 360 DVD drive keeps ejecting, chances are that something is preventing the tray from going all the way in or obstructing the clips.

In contrast to the random openings of the DVD tray, some users experience a problem where the tray won’t open at all, and it’s related.

To stop the Xbox 360 DVD drive from opening at random you need to attempt with a different disc and make sure that the tray is closing all the way in. In case that doesn’t help you’ll need to assemble the console and repair the hard drive at home!

Why Does The Xbox 360 Disc Tray Keeps Opening?

For some users, the problem has appeared out of nowhere and for others, the issue started after servicing the machine.

When the Xbox has been opened before, for a cleaning or a hardware component replacement, the DVD drive might not be installed properly.

There are a few components that the Xbox 360 DVD drive utilizes to open and close including:

When some of these components are compromised, the disc tray will uncontrollably open and refuse to close.

There are other reasons why the DVD drive would continue to open and next we’ll address each possibility individually to find what’s causing the problem.

How To Fix When Xbox 360 DVD Drive Keeps Ejecting?

Since most of the solutions would require specific tools to open the machine and work with the DVD Drive, here’s a list of everything that you would need before we begin:

Once you’ve got the tools at your disposal, let’s jump into solution number #1

The very first solution to this problem would be to remove if there is a disc inside the tray since the console will eject any disc that it can’t read.

Test whether the DVD drive will continue to open with a clean disc!

When the disc is not in good condition, the console will refuse to read the data, therefore keeps ejecting the tray.

Make sure to test with a disc that was previously working on the console and make sure that the content side of the disc has been wiped clean.

Tip: Also test closing the DVD drive without a disc.

The problem with the non-closing Disc Tray on Xbox 360 is sometimes due to dispositioned clips on the edge where the drive goes in.

When it’s not clipped properly, the components would obstruct the tray, therefore making it keep ejecting.

The solution requires 2 seconds and users only need to push the tray downwards while open to hear a click.

Sometimes the tray does not go all the way in, therefore not engaging with the close switch, which actively prevents the drive from opening.

Close the Xbox 360 DVD tray and observe the LED on the power button!

When the green blinking light does not stop even when the tray is inside, that means that the close switch was not engaged, thus, the DVD drive is sending the tray out.

To solve the problem, push the tray inwards, applying a slight force to make sure that the close switch has been reached, and check whether the DVD drive comes out again.

Assuming that you haven’t attempted it already, power cycling the Xbox might be helpful when the disc tray keeps opening up.

The method is simple:

Unplug the console from the power supply for a few minutes to discharge!

This method works by leaving the console without power for a few hours and then checking whether the DVD drive will keep opening up.

In some cases, the DVD disc tray won’t be able to fully close, thus keeps coming out.

The tray won’t close properly when there is a lot of dust packed in between the rollers or there is an object preventing the proper back-and-forth movement.

To remove any obstructions, you would need a can of compressed air:

In case that doesn’t help, you would need to open the Xbox and work with the DVD drive which we’ll learn how to do in the next part of the guide.

Be aware that opening the machine voids the warranty!

The first step in the process is to remove the faceplate by reaching in and pulling gently. The faceplate should come loose in one piece.

To remove the bottom panel, you’ll need to use the push tool and reach inside the little holes and push the holders inwards to release the panel.

Flip the console upside down where the entries are and using the flat head screwdriver reach inside each of the clip holder holes and attempt to separate the two side panels.

It might take a few minutes since there are several clips that hold the panels together.

When you’re ready, lift off the panel and proceed further.

To remove the metal cover, follow the steps below:

Before you can remove the DVD drive, you’ll need to disconnect the 2 cables:

They pull straight out. Users only need to make sure to grab the connectors and pull instead of pulling by the wire.

Once you’ve taken out the DVD drive, you’ll need to unscrew the 4 screws to open the device so you can start working on repairing the unit.

The screens are located at the 4 corners.

Tip: Be gentle when opening the hard drive to preserve its functionality!

The most common reason for the disc tray to continuously open is when the belt is dirty or stretched.

To remove the belt, you can use a flat-head screwdriver to pull it up gently.

When you’re ready follow the steps in reverse to install back everything into place.

After everything is installed back, the disc tray should no longer open at random.

Thus, the Xbox 360 Disc tray won’t close and keep opening when the disc inserted can’t be read or something is obstructing the rollers. If that’s not the case, then the tray belt has to be cleaned by opening the machine and reaching into the DVD drive.

Read Next: How To Connect Xbox 360 Controller To PC Bluetooth?

Now that we’ve learned the main reason why Xbox 360 DVD drive keeps ejecting, we know that there is a solution.

Even when the warranty of your Xbox 360 has ended, you can easily open the machine and clean the components, preventing the disc tray from closing.

In rare cases there is a weak laser, unable to read discs, therefore keeps ejecting the tray.