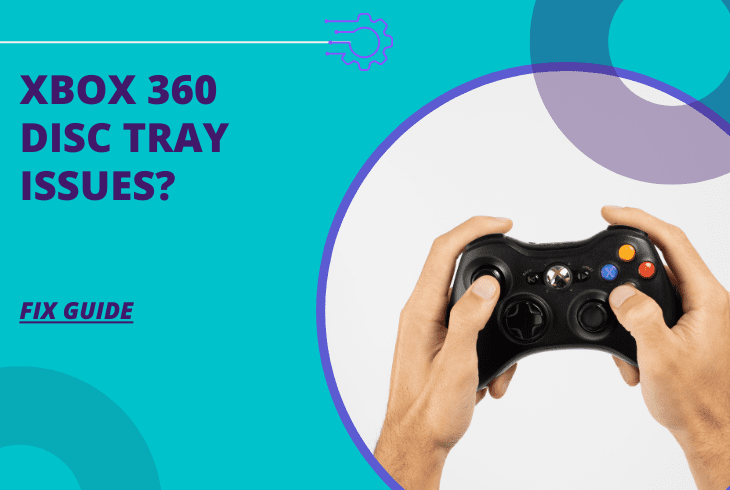 If the Xbox 360 disc tray not opening there is certainly something wrong!

When you press the front Eject button, the disc tray should come out instantly.

To fix an Xbox 360 disc tray that does not open, users need to manually pull it out and clean the rubber belt within the DVD drive. In addition, while the disc tray is opened, the sides have to be cleaned as well and any obstructions removed.

Xbox 360 Console Disc Tray Will Not Open. Why?

There are quite a few reasons why the Xbox 360 disc tray won’t open.

Let’s take a look at the most frequently reported causes to understand the problem better.

For now, we’ll simply exclude the possibility of a non-working DVD drive and proceed with what we can do at home.

There are quite a few solutions to attempt so let’s jump right in.

How To Fix When Xbox 360 Disc Tray Not Opening?

The solutions are listed in order to help you understand how to work with the DVD drive of your Xbox 360 so we strongly recommend following the order.

Let’s first see whether a simple power cycle can help:

Before attempting to manually eject the DVD drive, users should start by simply restarting the device to check whether a power cycle would help.

The procedure is simple!

In case the disc tray comes out so easily, then the problem was something significant.

It would mean that the rolling mechanism is intact and it was simply a software bug.

However, in case the DVD drive won’t open even when you press the eject button several times, proceed further!

Sometimes the disc tray only needs a push to get out. In case some object has obstructed the rollers, by helping the DVD drive manually, you’ll be able to solve the problem for good.

Follow the steps below to manually eject the disc tray:

The eject hole is located in the middle of the yellow sticker and when you reach inside and push, the disc tray should slightly pop out.

The last step is to grab the ejected part of the disc tray with your hand and manually pull the rest out.

Solution #3 Use A Card To Open The Tray

The Xbox 360 disc tray can easily be opened by any sort of plastic card such as credit/debit cards or even a fitness card.

The operation is fairly simple and can be performed each time the disc tray is stuck inside and won’t open when you press the eject button.

Here’s how to open the Xbox 360 disc tray by using a plastic card:

Again, this method does not damage the console in any way as long as the pressure you’re applying with the card is not too much.

Make sure to attempt the opening several times to understand how it works and how to perform it without much thought.

The main reason why the disc tray of the Xbox 360 is not opening is that the rubber belt in the mechanism of the DVD drive is dirty.

The belt can be cleaned with or without opening the Xbox console but reaching from the outside is extremely hard and sometimes not effective.

Clean The Belt Without Opening:

In case the rubber belt is stretched, you’ll need to microwave it for about 60 seconds!

Once you’re ready, test whether the disc tray will be able to open and close as normal.

There is an easy way to take a good look at what’s preventing the DVD drive from opening so let’s learn how:

Make sure to remove the disc from the tray as well since a disposition might be preventing the tray from coming out. Make sure that there are no objects stuck on the sides of the disc tray.

Solution #6 Always Leave A Disc Inside

Some users report that their DVD drive jams all of the time when there is no disc in the tray, which might sound a bit counterintuitive but actually works.

This can be explained since the weight of the disc, in most cases, makes the mechanism functional.

Test if the disc tray will open by pressing the Eject button while there is a disc.

In case the disc tray works well when there is a disc inserted, you can call it a day.

There wouldn’t be the need for more troubleshooting especially when this method works.

However, the circumstances show that the mechanism of your Xbox 360 DVD drive is worn out and you would need servicing for the device to continue functioning well, even without a disc.

Hence, to solve the problem when the Xbox 360 disc tray won’t come out, users need to clean the rubber belt with or without opening the console. Further solutions include, manually opening the disc tray and removing obstructions, and leaving a disc inside to increase the weight.

Read Next: How to Fix a Xbox 360 Disc That is Unreadable?

Now that we know why the Xbox 360 disc tray not opening and the possible causes, we can solve the problem at home without giving it much thought.

However, in case the problem is persistent, regardless of what you’ve tried, your Xbox 360 DVD drive might require servicing.

For more relevant posts, make sure to check our online tech blog!