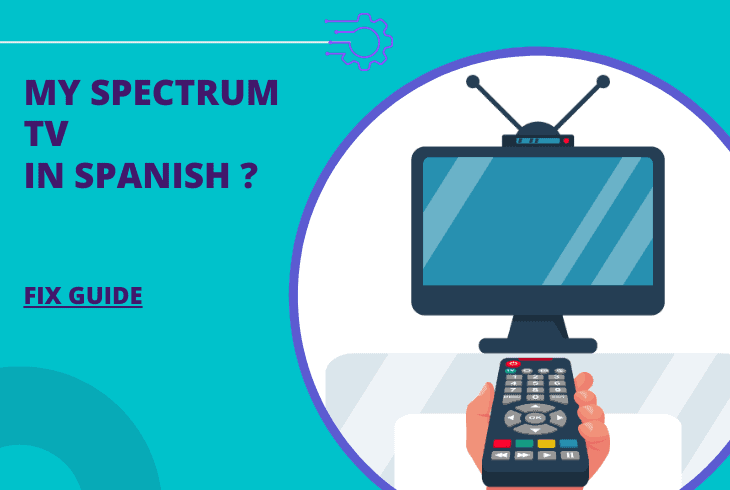 If you’re asking why is my TV in Spanish Spectrum, you’ve come to the right place. We have the solutions you’re looking for to get it back to English.

Spectrum does have Spanish-language channels with over 75.

We’ve found several ways how you can revert the language back to English, which can come in handy if you don’t speak Spanish.

Here’s how you do it!

To get your Spectrum TV language back to English, you’re going to check your receiver’s language settings. You’ll need to set it back to English. You can also check Spectrum’s secondary language feature and turn it off.

Before we move on to the actual solutions, it’s important to know the possible causes of this error.

A better understanding of the problem will allow you to choose the right troubleshooting steps.

Why Are Some of My TV Channels in Spanish Spectrum

Simply put, your TV channels are in Spanish since your language settings are set to it.

There are also instances when you’re watching the Spanish-language version of the channel.

There’s also the secondary audio channel feature called SAP. It could have been activated, which turns your channel audio to Spanish.

Your Spectrum receiver could be set to Spanish rather than English. It’s an easy change, so you can also consider that it was accidentally set.

The secondary audio channel feature is excellent, especially for Spanish-speaking users. If it’s activated, the audio can change to Spanish.

Spectrum has a Latino package that comes with several native Spanish channels. There are also Spanish versions of these channels, which can cause a little bit of confusion.

Accidental presses on your remote can happen, especially if you leave your remote lying anywhere. Anyone can change the language settings, and it’s possible someone sets it differently.

These are the different reasons that can cause your TV and Spectrum box where the audio is in Spanish.

Let’s go ahead with the different solutions so you can resolve this issue once and for all.

How to Change Language on Spectrum

Spectrum has several language options available for you. They have many foreign language programs and channels, including Spanish.

Having support for different languages is certainly an awesome feature. However, it can also get confusing at times.

If you’re dealing with an audio issue with your Spectrum channels, consider turning your receiver off for a while.

Allow it to rest for around 5 minutes so it can cool down rapidly. You can also switch off your TV and turn it on again.

Solution #1: Watch the English Versions of the Spanish Channels

If you’re asking why is my TV in Spanish Spectrum, it might be possible that you’re watching the Spanish channels.

Most major television and cable networks broadcast their channels in a few languages. One of them is Spanish, and there’s a Spanish version of the channel in your list.

There are also Spanish networks, which come with Spanish-language audio.

If the first time you open your TV and the audio is coming out in Spanish, you will want to check if you’re just watching the Spanish version of the channel.

Here’s how to switch to the English audio channel:

Solution #2: Switch Off SAP in the iGuide

SAP or Secondary Audio Programming is a Spectrum feature that adds a different language track on the same channel.

In this case, it’s set to Spanish. That’s why it’s the language that’s coming out of your TV’s speakers.

Depending on your Spectrum receiver, you will get a different channel guide. If you have an Arris, Pace, or Motorola receiver, it will have the iGuide.

You can turn off the SAP feature directly from the iGuide so you can listen to your channels in English.

Here’s how to turn off SAP in the iGuide:

Note: Use the left and right navigation buttons to scroll to the default track.

Solution #3: Turn Off SAP in the Passport Guide

If you have a Cisco or Scientific Atlanta receiver, your channel list is the Passport Guide.

It also has SAP enabled, but the process is a little bit different compared to the iGuide.

However, it does the same thing, which will restore your audio to the default channel.

It’s possible that someone could have changed this accidentally. That’s why you’re getting the Spanish audio from your TV channels.

Here’s how to deactivate SAP in the Passport Guide:

One of the things you can do is to check whether you have selected English as your Spectrum box’s language preference.

It’s possible that this was changed, causing your channels to be in Spanish.

You want to make sure that all language settings on your box are switched to English. This way, your box will not be confused and use both Spanish and English.

Here’s how to change the language preference of your Spectrum box:

One of the settings that can affect your Spectrum box’s language is Descriptive Video Services or DVS.

It’s a feature that provides audio version descriptions and narrates the content.

Depending on your language settings, it’s also going to be affected, as it can be in Spanish or another language.

You want to turn this off, so those descriptions will be muted, and you’ll hear the actual audio of the channel you’re watching.

Here’s how to switch off DVS on your Spectrum box:

Solution #6: Change the Audio Settings on Your Spectrum Box

Your Spectrum box has a primary language setting that you can change.

If the audio continues to come out as Spanish, you want to take a look at this setting and change it back to English.

It’s possible that you have changed all other possible settings, including SAP, but your audio is still coming out as Spanish.

Here’s how to change your audio settings to English:

These are the different steps you can take to change your TV’s audio back to English from Spanish.

Unless you’re watching a Spanish channel, you should be able to revert the language back to English.

If you continue to experience this, we recommend contacting Spectrum customer support for assistance.

Why is my TV in Spanish Spectrum? Hopefully, we have answered all that in this article.

We have also provided different solutions to change the language settings on your TV and receiver.

These solutions should only take you a couple of minutes, allowing you to enjoy watching your favorite shows in the language you’re comfortable with.

Read Next: Spectrum Your TV Will Be Right With You – Fixed!