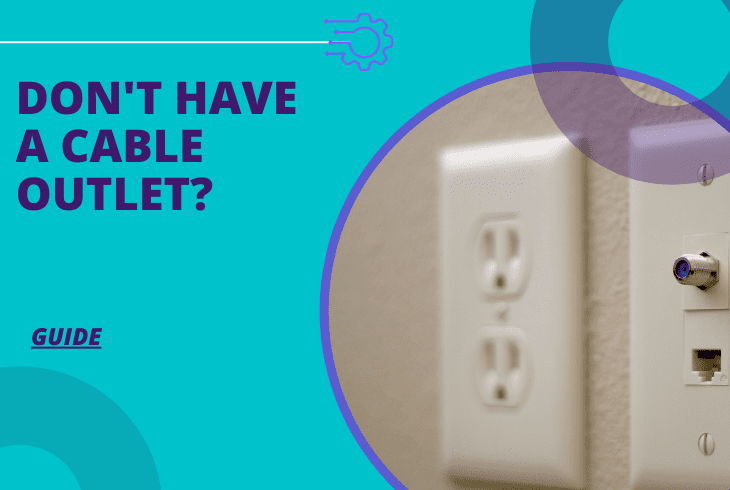 If your home doesn’t have a cable outlet, you might want to think about getting a fiber optic connection, DSL over telephone cables, cellular phone hot spots, or a satellite connection. You won’t need a cable outlet if you go with one of these options.

What’s the working principle behind cable outlets? Let’s look at how cable outlets operate before suggesting alternatives if you lack one.

How do Cable Outlets Work?

A signal moves along the copper wire in the middle and the metal shield in a coaxial cable. Both of these metal conductors give off a magnetic field.

So, the signal can be sent over long distances with little signal loss or interference.

Suppose you do not have a cable outlet in your home, no need to worry. Below is an in-depth detailing that should easily solve your problem.

What If you Don’t Have a Cable Outlet? – Solutions

What if I don’t have a cable outlet? The fixes are straightforward. However, some of them may be expensive in the long run.

If you don’t have a cable outlet and want to use a cable TV, you’ll probably have to involve a qualified technician and have yourself sorted.

Let’s now look at the alternatives to cable outlets in detail.

Fiber optic is comparable to coaxial in that it calls for an outlet to be drilled into the wall of a building and a cable to go to the device for it to be connected.

The construction of the cable is what sets these two options apart. Copper is used to make a coaxial cable, whereas fiberglass produces fiber optic cable.

They both move data and the internet at speeds comparable to one another.

If you don’t have a cable outlet but have an optical outlet, don’t beat yourself up as both perform similar tasks.

Because fiber optics need more work to install than other forms of wire, it is more typically used in office buildings and other large structures.

From the standpoint of residential internet, it just would not be worth it.

A hotspot is a wireless access point that lets you easily connect electrical devices to the internet.

Most smartphones have these built-in, but you can also buy dedicated mobile hotspot devices that connect more devices, have faster speeds, and last longer on a single charge than your phone.

There are also Wi-Fi hotspots in a lot of restaurants and public places.

They usually have limited data limits, and it’s scarce for a hotspot to have unlimited data, so they can’t replace your home internet.

Still, some service providers offer big plans that let you do a lot with a hotspot each month.

If you don’t have a cable outlet and still need internet access, cellular hotspots may be a very viable alternative.

Perform the test numerous times to see how your speeds change depending on your location and how many devices you have connected.

DSL uses the same phone cables as your phone to provide a broadband internet connection. No new wiring is necessary because you already have telephone wires in your home or office.

You’ll only need a DSL modem, which you can get from DSL internet providers like Frontier® when you sign up for DSL service.

The phone line transports signals from the internet service provider to the modem.

The device collects signals and converts them into the necessary signal to connect to the internet.

DSL connection speeds are faster and frequently less expensive because the necessary lines are already available. It’s easy and quick to set up.

DSL requires a user to be within a few miles of a telephone switching office to function, and signal quality degrades even within that distance.

DSL speeds are also noticeably slower than those of cable and fiber-optic services.

A satellite connection is a type of internet access in which your internet service provider (ISP) sends an internet signal to you via satellite.

Can you stream on satellite internet? Yes, you can. However, it is crucial to keep an eye on your data usage.

Video streaming uses a lot of data, and data is scarce with satellite internet services.

Satellite internet providers limit the amount of full-speed data you receive each month based on how much you pay. As a result, if you stream excessively and exceed your data limit, your speeds will be slowed.

However, satellite internet has data limits and slower speed; we do not recommend it over cable, fiber, or DSL.

Huawei has recently introduced a product referred to as a 5Ghz Hotspot Box.

These gadgets link to the same data network as cellphones and plug into standard power outlets to operate.

They will then function as a hotspot that all devices can connect to, thereby establishing a Wi-Fi network across your home.

This option is perfect for you if you just moved into a new house and haven’t had a chance to set up your coaxial outlet connection yet.

The signal strength is considered to be one of the most significant drawbacks. There will be times when the signal will be fragile due to a problem with the 5G network.

The data connection, much like the cellular hotspots, can at times simply stop functioning.

When acquiring this as an option for your network, the location of your residence is an additional factor that is quite crucial to take into consideration.

Even though data technology has expanded at a high rate over the past decade, regions within countries could face deficiencies. When using a 5 GHz box, there is no solution for this limitation.

You should have a solid agreement with your landlord before utilizing the services of a technician. This is because a coaxial outlet setup requires drilling into the walls.

Read Next: How to Watch TV Without Cable or Internet?

If you encounter connectivity problems when trying one of the options I’ve mentioned, it would be best to contact your internet service provider.