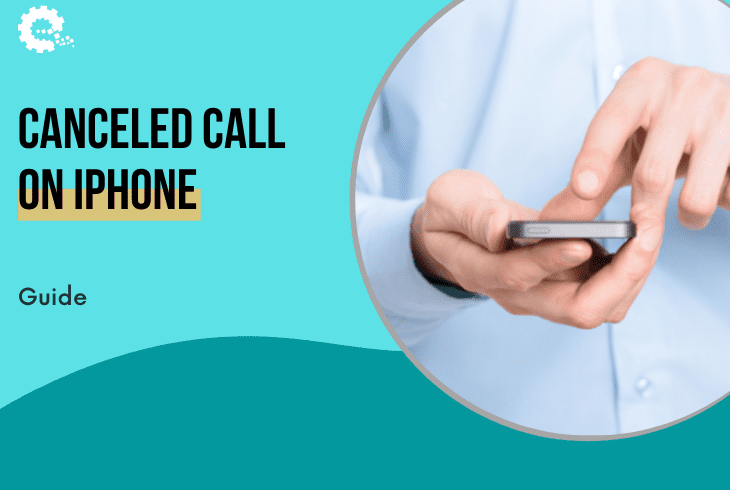 What does canceled call mean iPhone? Is it something that has been done by the receiving or the calling end?

In this tutorial, we’ll be clarifying what a canceled call means on an iPhone, how it happens, and get to the bottom of who initiated for it to be canceled (caller or receiver).

What Does Canceled Call Mean iPhone?

A canceled call on your iPhone means that the call went through successfully, but the caller canceled it even before the receiving end picks the call up or goes to voicemail.

It’s canceled because the call was not properly received by the recipient and due to this, it’s showing as “canceled” in the logs.

Contrary to what most people believed in, canceled calls are different from dropped calls (missed calls), because usually, it’s canceled or stopped by the caller, not the receiver.

Reasons Why It Appears as Canceled Call in an iPhone

There are quite a few situations where a canceled call in the logs would appear, and these situations include:

The Caller Canceled Before It Was Picked Up

One of the most common reasons why there’s a canceled call in your logs is that (you), the caller canceled or stopped the call even before it is supposed to be picked up by the receiver.

There’s also an instance where a cell tower is receiving too much data at a specific timeframe, causing some calls within the area or the vicinity to cancel or drop.

Although this is rare, it is one of the reasons why a call is canceled even before it is picked up.

The Call Was Stopped Before the End of the Voicemail Prompt

Another instance is that the call has been dropped by the caller before the beep or sign that the call is going to be directed to voicemail.

A canceled call may also occur if there is a problem with the network of either the caller or the receiver.

The call could be automatically dropped if the call has been placed and the network problem occurs even before the call is picked up.

Furthermore, it can also be because the receiver could have toggled airplane mode on right before the call is about to ring and be known.

The Call Reached the Cut-Off Limit

And last, but most definitely not least would be because the call could have reached its cut-off limit.

As for most normal network calls, there’s only a number of rings until the line will get cut off.

One of the things that could happen when this happens is that you’ll see the call as “canceled” in the logs.

So, if you are wondering, what does canceled call mean on iPhone, it’s not always the receiver’s choice to drop it.

Sometimes, it’s initiated by the caller or there has been a problem in the connectivity of the network.

This will depend on where you are in the communication. It will appear as “canceled” if you are the caller and you decide to hang the phone up even before the receiver picks it up.

However, if you are the receiver, it will appear as “missed” if the caller canceled it after it rang. It would be “canceled” from their end and it will be “missed” from yours.

So, if you happen to see a canceled call in your logs, that means you were the caller and you initiated the cancelation of the call before the receiver could have picked it up.

Moreover, canceled calls don’t affect all calls that come from a number.

Blocked calls, on the other hand, refer to all calls that are made from a particular number and it’s a setting that is done by the person or the receiving end.

Some other factors that differentiate blocked calls from canceled calls include:

Blocked calls, since the number is the one blocked, would not ring at all whereas canceled calls would ring and connect and would just be canceled in the middle of the receiver picking the call up.

It can be a result of any of the causes of canceled calls such as given below:

Blocked Calls Filter Everything From a Number

Last, but most definitely not least is that blocked calls aren’t exclusive to calls only.

This would include FaceTiming and iMessaging (iPhone to iPhone), and texting or SMS.

Blocking a number would result in restricting everything from that particular number, not just calls.

These are a few of the factors you can use that differentiates blocked calls from canceled calls.

You might be thinking that a person blocked you, when in fact, the “canceled call” you see is just a result of poor network conditions.

Read Next: Should I Renew Lease on iPhone?

In a nutshell, canceled calls are calls that have gone through but were canceled or declined by the caller before the receiver had the chance to pick it up due to the caller canceling it manually, network errors and problems, the call reaching the cut-off limit, and overloaded cell towers.

It could be daunting to find canceled calls on your mobile phone logs, but with this guide, you already know what they are and how they came to be!

Keep this guide handy so that the next time you ask and think about searching, what does canceled call mean iPhone, you know where to go!