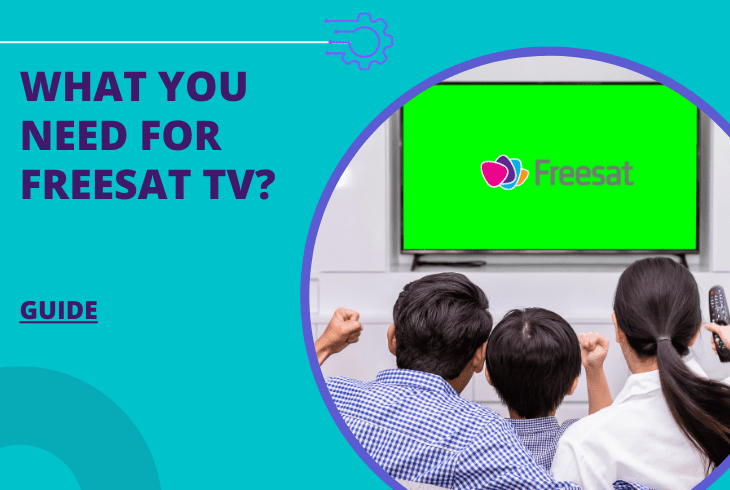 Asking what do I need for Freesat TV? It’s simply and easily accessible!

It’s well-known that with Freesat you get access to quite a lot of TV channels for free, including HD channels, On-Demand content, and much more.

However, there are some requirements that you need to ensure beforehand, and in this guide, we’re going to cover everything.

To get Freesat TV you need a satellite dish with an “LNB” port to connect one end of the coax cable, and the other end goes into your Freesat-ready TV or set-top box. Lastly, a channel scan might be necessary for all SD and HD channels to appear.

The entire guide takes no more than 3 minutes to read so let’s jump right in!

About Freesat – Must Know!

Nowadays, content streaming is a big part of our daily lives and Freesat delivers a service that allows users to get satellite TV.

One of the best cost-efficiency providers, Freesat delivers a wide variety of channels for free.

In order to get the Freesat services in your home you will need to have a satellite receiver (TV Box) or a satellite dish.

You don’t need to install a new satellite dish or purchase a new set-top-box if you already have one established or at your disposal.

Let’s learn more about what Freesat delivers to its users!

Freesat delivers more than 170 channels in total with about 20 of them in HD quality!

As already mentioned, in different regions across the UK, some channels might be missing.

In case you’re missing more than half of the channels, make sure to perform a Channel Scan.

In addition, Freesat provides access to your favourite premium applications such as Youtube, BBC iPlayer, Netflix, ITV Hub and UKTV.

There are much more apps available as well as free and paid On Demand Content platforms.

Here is everything that you can use once setting up Freesat TV:

There are some requirements to get Freesat TV so let’s learn more about Freesat!

How Does Freesat Work?

The Freesat service can be acquired in different ways, depending on what you’ve already installed.

Nowadays, Smart TV manufacturers have at least one TV model with a Freesat built-in, which means that you don’t need an additional device.

In contrast, non-smart TV users can easily connect a Freesat TV Box that goes for around £70-£200, which is always a user’s choice.

No matter which variant you go with, the service can easily be accessible as long as the satellite (Coax) connection is secured.

What Do I Need For Freesat TV?

If you’re considering switching services and becoming part of Freesat, you would need satellite input.

Hence, you’ll need to perform an installation of a satellite dish, in case you haven’t got one already.

In the upcoming steps, we’re going to explain how this works from top to bottom!

It does not matter whether you’re using Freesat TV Box or Freesat-ready TV, the satellite input is necessary in both cases.

The Freesat service is compatible with almost ALL satellite dishes models in the UK, so if you’ve got one, you’re ready to acquire the input signal.

In case you don’t have a satellite dish you need to purchase and install one!

Most retailers sell satellite dishes, so you could find one online anytime. There are some really cheap, yet effective dishes that support Freesat.

In case you’re looking to buy one, we strongly recommend checking the bottom of this guide for the best recommendation!

Whether you’re having a Freesat-ready Smart TV or a Freesat satellite receiver, you need to set up the coaxial connection before proceeding.

You need to connect the coax cable to the “LNB” input of your dish and the other end to the Freesat-ready TV or Freesat set-top-box input.

Only when your dish is connected to your TV or receiver, will you have access to ALL available channels.

In case the channels are not there, you’re going to need to retune the Freesat device!

It’s weird how when we connect the Coax cable, nothing happens, like we didn’t do anything at all.

Well, sometimes things don’t work like magic, and we need to manually acquire the Freesat channels only after ensuring that the satellite input is secured.

Here’s a simple way to scan for channels on a Freesat TV set-top-box:

Your Freesat TV box might take up to 10 minutes to scan for channels. Be patient, and don’t cancel the process unless it prologues for more than 20 minutes.

You will be notified that the scan is complete with an on-screen message, after which all Freesat channels should appear!

What Do I Need for Freesat HD TV?

There is nothing you need to do on top of installing a dish and connecting the output to your Freesat-ready TV or set-top-box.

From the 170+ free Freesat channels, you’re going to find about 20 HD channels, again for free.

There is no further installation, update or anything required. The HD channels would already be there and for some better orientation, we’re going to name some of them:

The channels will not always align with the channel number so feel free to browse through the list until you discover and *favourite* the ones you like the most.

You’ll be able to easily access the HD channels anytime you want, as long as your Freesat setup is intact.

Here are the answers to the most frequently asked question revolving around Freesat!

Do I Need a Satellite Dish To Get Freesat TV?

Yes, a satellite dish would be required regardless of whether you’re using a Freesat-ready TV or a Freesat TV Box receiver. The satellite dish connects to the Freesat device via Coax cable!

Do I Need Internet To Get Freesat TV?

No, you don’t need an aerial if your TV has Freesat pre-installed. However, the satellite dish is necessary even if your TV doesn’t need to have a Freesat TV box.

How Much Freesat Costs – Prices?

Freesat is a completely free service, as long as you have the setup ready to go. The only thing that you might have to pay for is the satellite dish installation and purchase of the Freesat TV Box.

In case something is not clear, you can always reach out for help and professional setup installation at Freesat.

They would assist you with any questions and inquiries you have!

If you’ve made up your mind and you’re switching to Freesat, you’re going to need a satellite dish, no matter the streaming device.

This is why we recommend getting a cheap, yet proven to be effective Z1 or Z2 Sky & Freesat Satellite Dish Kit.

Note: The dish comes with LNB input for coaxial connection!

Here we’ve learned what do I need for Freesat TV and the most important factor that we need to remember is that a satellite dish is always necessary. From there you can connect the Coax cable from the dish to a Freesat-ready TV or a Freesat TV Box.

We hope that this guide was helpful and for more relevant content, check our blog!

Read Next: How To Connect Sky Dish To Freesat TV?