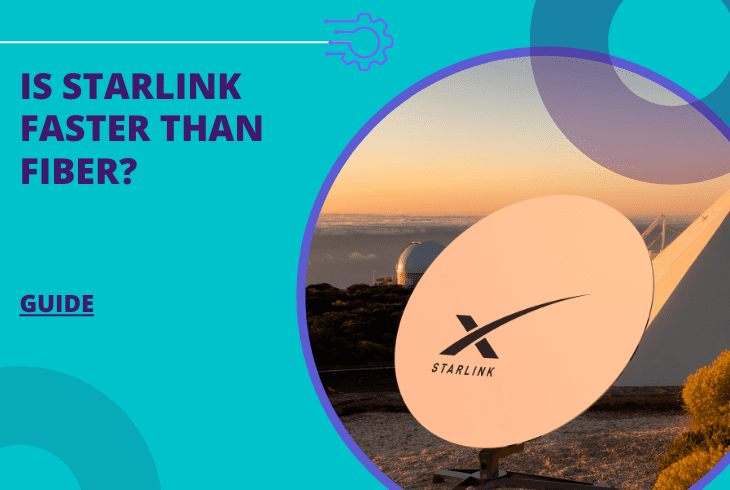 Is Starlink faster than fiber? This is an important consideration when you are trying to choose an internet service provider?

Today, you have several internet service options, and choosing the fastest option is a priority for many.

If you are trying to find out what is faster, Starlink or fiber, you are in the right place.

Here you can learn more about Starlink and fiber internet, which one is faster, and which one makes the most sense for your needs and budget.

Fiber has a faster median and maximum speed with less latency than Starlink. It also offers a stable connection that’s unmatched by other providers.

Learning more about Starlink and fiber will help you make an educated decision.

If you are wondering, “will Starlink be faster than fiber,” the guide here will answer all your questions.

A Quick Comparison of Starlink vs. Fiber Optic Internet

Before diving into the specifics, here is a general overview of Starlink and fiber optic internet service.

A Closer Look at Starlink Internet

Starlink is a joint effort between SpaceX and Elon Musk to bring satellite internet worldwide to people in rural and remote areas.

The provider has offered internet service to users in 36 countries and launched almost 3,000 satellites into space.

It launched what was labeled a “constellation” of satellites worldwide. These satellites are in low-Earth orbit or LEO, which means they are just 300 miles above the earth.

Other satellite internet providers have satellites that orbit the earth at 22,000 miles.

Many people wonder if Starlink will exceed the speeds of existing fiber internet infrastructure as a satellite internet service provider.

They also wonder what it takes to utilize this innovative technology that’s been introduced.

The Cost and Set-Up of Starlink Internet

To utilize Starlink internet, all that is needed is the company-provided satellite dish and a Wi-Fi router.

However, the issue arises because of the high initial charge users must pay for the satellite. Another issue is the reported inconsistent speeds.

There’s also the concern of the satellites being in low-Earth orbit, which some believe will impact the visibility of the stars and night sky.

Even though there are issues, Starlink has proven to provide these benefits when compared to other satellite internet providers:

These benefits are especially appealing to individuals who don’t have access to fiber optic internet service due to their location.

However, this doesn’t mean it can compare to or compete with fiber optic service.

Is Starlink Faster Than Fiber?

The median download speed for users in the United States was measured at 97.23 Mbps, according to one test.

This exceeds the nation’s standard for broadband internet speed.

The speeds for the fastest satellite providers were 19.73 Mbps and 18.13 Mbps, which shows Starlink is significantly faster.

Starlink’s upload speeds were measured at 13.89 Mbps, with the closest providers coming in at just 3.38 Mbps and 2.43 MBps.

Besides the initial hardware fee, there’s another barrier to choosing Starlink internet. You must find a clear area for the satellite where it is not obstructed.

If you live somewhere there are many trees; you will find it difficult to get consistent or reliable internet using Starlink.

Also, SpaceX doesn’t help with installation. It’s up to you – or for you to find someone to hire.

Clearing trees to create a clear area will increase installation costs even more.

Starlink vs. Other Satellite Internet Providers

Starlink is faster and provides improved latency than other satellite internet services because of its LEO satellite constellations.

These are much closer to the Earth, which means faster service.

Cases of high latency are caused by how far a signal must travel. The signal provided by Starlink satellites doesn’t have to travel as far as it does from other satellite services.

When you choose Starlink, you get service without data caps, providing unlimited internet data.

While all that sounds great, you still must figure out – is satellite internet faster than fiber optic?

A Closer Look at Fiber Internet

Fiber internet was the latest and most advanced option for broadband internet until Starlink debuted.

Fiber internet, which is short for “fiber-optic”) is delivered via cables made of flexible glass strands.

Like the phrase, “fast as the speed of light,” fiber optic internet is extremely fast, exceeding 1 Gbps.

Usually, fiber networks are completely grounded. This means they are buried in the ground.

The benefits of grounded wiring include:

With fiber internet installation, the service provider you choose handles everything, unlike Starlink, where you are on your own.

Unlike Starlink, fiber optic internet is symmetrical. This means that the upload and download are the same.

An important part of fiber internet you should know is called the “last mile” concept.

Large fiber trunk cables are run by the ISP you choose into your neighborhood. The final run is what connects all the homes and is called the “last mile.”

This is the most expensive part of installation for your ISP and may impact the actual speeds you receive.

Today, ISPs have a few options. Existing copper wiring can be used; they can create a wireless signal or run the fiber to your home.

It’s smart to ask about the method the ISP uses since it will impact the speeds you get from the service.

Starlink vs. Fiber: Which One Is Faster?

While Starlink is still improving, it has a way to go before it can compete with the speeds offered by fiber optic internet service.

The speed and accessibility issues that Starlink is dealing with make it questionable if this will be a replacement for fiber.

It delivers faster speeds than all satellite internet providers (including Starlink) and provides a more reliable connection and higher levels of consistency.

Read Next: Does Starlink Work Anywhere?

If you have wondered, “is Starlink faster than fiber internet service,” the answer should be clear by now.

In almost every aspect of service, speed, and cost, fiber optic is the winner.

While Starlink is still making improvements, it’s not predicted to surpass what fiber optic internet offers any time soon.