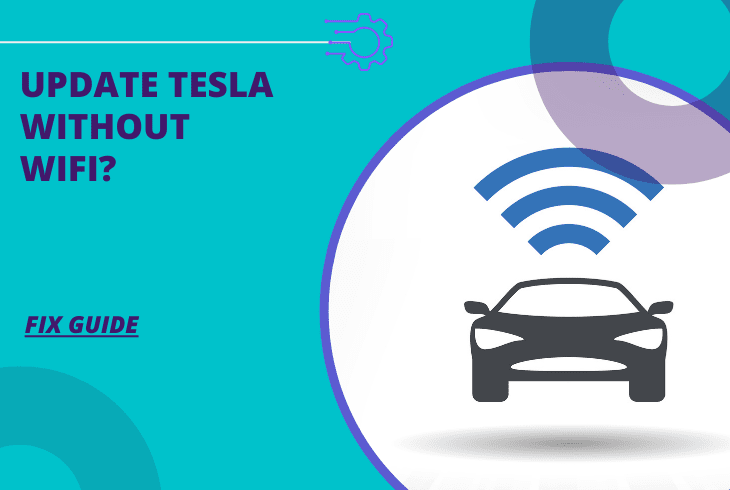 You could be wondering how to update Tesla without WiFi especially if you are a long way from home or work.

You could also be wondering “My Tesla seems to be working just fine. Exactly why would I want to update it?”

Your Tesla’s performance, whether it’s good or bad, is only one aspect of the entire experience. There are numerous advantages you get by simply updating your Tesla.

There are two ways to update your Tesla without WiFi; the first is to use a mobile phone as a hotspot, and the second is to update it through the Tesla app on your mobile device. In this article, we’ll get to understand these two options in detail.

Why You Should Update Your Tesla Without Wifi

Here are some of the major reasons why you should always update your Tesla even if you don’t have WiFi:

Security concerns are by far the most crucial justification for keeping your Tesla updated.

Hackers work tirelessly to steal and gain control of your data and other personal information, just as Tesla developers are always striving to provide you with the greatest possible experience.

There will always be some flaws with Tesla vehicles, no matter how flawless the developers attempt to make them.

The most bizarre aspect is that these flaws may not be exclusive to any one car; rather, they may only occur on multiple Tesla vehicles.

Therefore, updating your Tesla regularly is the best way to keep it bug-free.

Updated Tesla also provides you access to fresh features in addition to improvements in stability, performance, and security.

How To Update Tesla Without Wifi

Here are the detailed step-by-step guides on the two methods on how to update your Tesla without WiFi:

Step #1. Set Up a Hotspot on iPhone

Follow these instructions to set up your wireless hotspot if you have an iPhone or any other iOS device:

To activate the personal hotspot, the slider will be green when it is turned on then type in your password.

How to Turn on a Mobile Hotspot on Android

Here’s how to enable tethering on an Android so that you may share your data:

Ensure the data sharing switch is turned on. You have the option to specify your hotspot’s parameters, including your data cap, network name, password, etc.

Depending on the model of your phone, you may also get the fast access menu by swiping from the top of the screen and then tapping Mobile Hotspot.

Users of the Google Pixel and Motorola Moto will find this on “Network & Internet.”

This option will be found under “Tethering” for LG smartphones. Users of Huawei devices must go to “Wireless & Networks.”

To link your Tesla to you’re phone’s Wi-Fi network do the following:

The Wi-Fi icon appears at the very top of the display touchscreen when it is connected to Wi-Fi.

Move your hotspot mobile device closer to your Tesla car or think about using a range extender if the hotspot Wi-Fi network is missing from the list.

Tesla establishes a connection to the Wi-Fi hotspot you created.

After setting up a hotspot, follow these instructions to update your Tesla:

Either schedule the software update for later or apply it right now. The yellow clock symbol will turn into a white icon when you set up a time for the update to begin installing.

You can adjust the timing of the update at any moment before it occurs by tapping the clock icon.

There will be a green download symbol on your screen when the update process begins.

The second method how to update Tesla software without WiFi is to do it through the Tesla app on your mobile device.

Even if your car isn’t linked to Wi-Fi, a software update will be available if your display a yellow download button.

You have the choice of upgrading your Tesla app manually if you don’t like automated updates.

The manual option allows you to update particular applications on your smartphone.

Here is how you can manually update the Tesla app on Android:

You’ll get to see whether the Tesla app needs to be updated. To view the most recent updates, click the drop-down menu next to the Tesla app.

To install the most recent Tesla version, do so by tapping the Update button. That’s all.

On Android devices, turning on Automatic Updates is the quickest and easiest method to keep your Tesla updated.

You’ll avoid the hassle of having to go to the Play Store now and again to update Tesla.

Furthermore, you may opt to update Tesla automatically using mobile data or to be cautious and update Tesla solely via Wi-Fi.

To enable automatic app updates on the Play Store, follow these steps:

Next, decide which choice you prefer; select to auto-update applications over Wi-Fi or mobile network, choose Over any network.

To save the changes you’ve made, choose DONE.

Remember if the Google Play Store is corrupted or blocked by any of your other settings, even with automatic updates enabled, your Tesla won’t update automatically.

But for Android, that’s the quickest method to update your Tesla.

Whenever you wish, head over to the App Store to update the Tesla app on your iPhone:

A different option is to look up the Tesla app on App Store. If an update is due, an Update icon will appear alongside it. This is perfect for fast updating the Tesla app.

You may configure your iPhone to automatically update Tesla rather than doing it yourself:

Despite having Tesla’s automatic app updates turned on, your Apple device may not always install them right away.

Read Next: Why Is My Internet So Inconsistent?

If you own the EV, you need to know how to update Tesla without WiFi because aside from bug fixes, Tesla updates enhance the stability and efficiency of certain applications as well as your Tesla car as a whole.

For instance, if an old Tesla app consumes more resources than necessary, it won’t only cause issues for the app; your entire car would be affected.

You might need to update your car if a software problem is causing your car to malfunction.