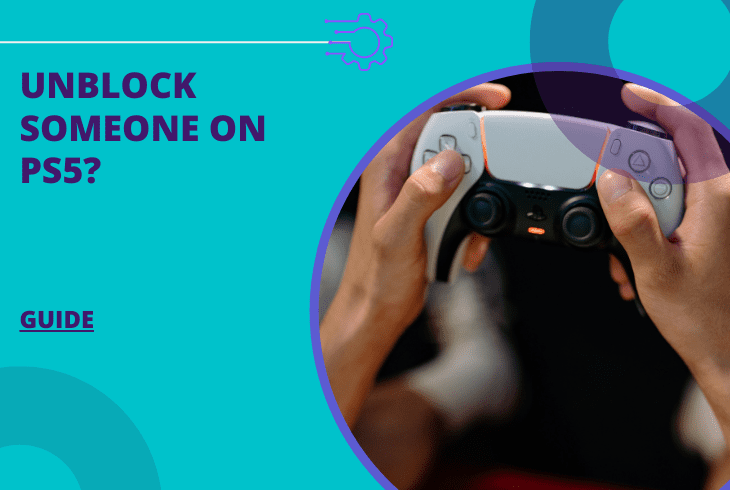 Wondering how to unblock someone on PS5? Keep reading!

When you have blocked someone on the PlayStation 5, there are quite a few restrictions that will be applied so we’ll later review them.

The good thing is that you’re able to immediately unblock PlayStation users both from the application and console menu.

To unblock PS users from the console, you’ll need to open the Game Base tab and view the Blocked Players list. Once there, you’ll find the Unblock button next to each blocked party, therefore with one click you can have them unblocked for good.

Let’s first learn more about what the block feature does to PlayStation user:

Have You Blocked Someone On PlayStation?

When you block someone in the PlayStation network, there would be only partial restrictions on the target.

The blocked PSN user won’t be able to inspect your PlayStation account (profile) and will not be able to see your Friends, Games, Media, and so on…

Blocked users won’t be able to access the participant’s following:

What’s interesting is that the blocked user will be able to send messages and chat invites on his side, but the recipient will not receive them.

However, messages are saved and will be sent once the user unblocks the participant. Next, we’ll learn how to do so!

How To Unblock Someone On PS5?

In case you’ve accidentally blocked someone on the PlayStation network, all of the above-described restrictions will be activated for the player.

To unblock them in a few easy steps, follow the steps below:

Step #1 Open The Game Base Tab!

From their Game Base tab, PlayStation users can block and unblock friends and participants that have been involved in any variety.

This is where you can also block users!

To open the Game Base tab, you need to reach the PS5 Control Center!

Simply press the PS button and open the Control Center to enter the Game Base tab.

Once you’re there, feel free to proceed with the next step to unblock anyone you want.

The next step is to view the users that you have already blocked in the past, and therefore, unblock them. In that regard, you need to open the Game Base Settings.

From the Game Base Settings, choose Blocked Players to view them!

Then all blocked players, friends or not, will be displayed in a list so you can choose the one you need to unblock or take any other measures against.

Let’s learn how to unblock them!

The final step is to unblock the users we want to. Simply press the Unblock button next to the blocked player that you need unblocked. It will happen instantly.

The user will now be unblocked and the restrictions we’ve mentioned at the beginning of the guide will no longer be active.

They will be able to send you messages and view your friends, content, and activity so be aware.

In case you want to block someone on PlayStation 5 read the next part of the guide!

How To Block Someone On PS5?

In case you’re interested in how to block someone, instead of only unblocking, the steps below will help you out.

Make sure to scroll up and learn what the PlayStation Block does before actually restricting someone by doing so.

Step #1 Go To The Control Center

To block a user on PlayStation 5 and apply the above-described subscriptions, you’ll need to reach the Control Center from where you’ll access most of the options.

To open the PS5 Control Center, press the PS button on the controller.

The menu, full of options will appear and you’re ready to proceed with the next step!

Since the PlayStation’s workflow is oriented around gaming and community communications, the Block User options would be located in the Friends tab.

To reach the Friends tab, you’ll need to choose Game Base from the Control Center options.

You’re almost finished when you enter the Friends Tab on your PlayStation 5.

In the Friends tab, you’ll need to select a member that you would like blocked.

Keep in mind that you can also choose members from the Parties tab, therefore allowing you to block not only friends but players with whom you’ve participated in group chats and parties.

Simply open the Parties tab and choose anyone that you would like to block.

The last step is simple!

Once you’ve selected the member that you want to be blocked, you’ll be on their profile. In there you need to select More, to be able to open ALL options.

From there you can finally select Block, and confirm, which will apply all of the restrictions that we’ve mentioned earlier.

The PSN player is now blocked from your side. That was how to unblock people on PlayStation but keep reading since the interesting part is yet to come!

Block/Unblock On the PlayStation App?

Yes, you can also block and unblock people from the PSN network even if you don’t have access to the console.

The purpose of the PlayStation app is to keep friends and groups connected so there surely is a way to manage your interactions efficiently via the app.

How To Block/Unblock On PS App:

This is how to unblock/block users in the PlayStation app.

Next, we’re about to describe how to view ALL blocked users in the app and eventually manage their interactions with us!

In the Blocked List, you’ll be able to see the users that have been previously blocked from your profile.

You might have done this in the past and forgotten, but the user will remain blocked until further notice.

Let’s now learn how to view the Blocked List on PS5 in easy steps:

This will bring up ALL users that have been blocked.

Feel free to unblock somebody by following the steps above or keep them blocked until you decide otherwise!

How To Report Users On PlayStation 5?

There are a couple of things that you can actually report. You can of course report the player, but it’s always best if you keep the report aligned with what actually happened.

One way of reporting something about the user’s profile is by opening the user’s page and choosing Report.

In case you need to report something said in a conversation, open where the chat took place and choose More. From there select Report and follow the on-screen instructions.

Hence, to block someone on a PlayStation 5 users need to open the Game Base menu, and from there enter the Blocked Players list. This both works on the console and app, so the last step would be to select the “Unblock” next to the user we need unblocked.

Read Next: Why Is My PS5 Lagging with Good Internet?

Here we’ve learned how to unblock someone on PS5 both, by using the application and the console’s menu. It’s really simple as long as you know what you’re doing.

Now you can block/unblock any users you want, so you can manage your community interactions.

Keep in mind that you can also report a player for inappropriate behavior or simply report content from their profile page that you find disturbing or against the Terms of Service!