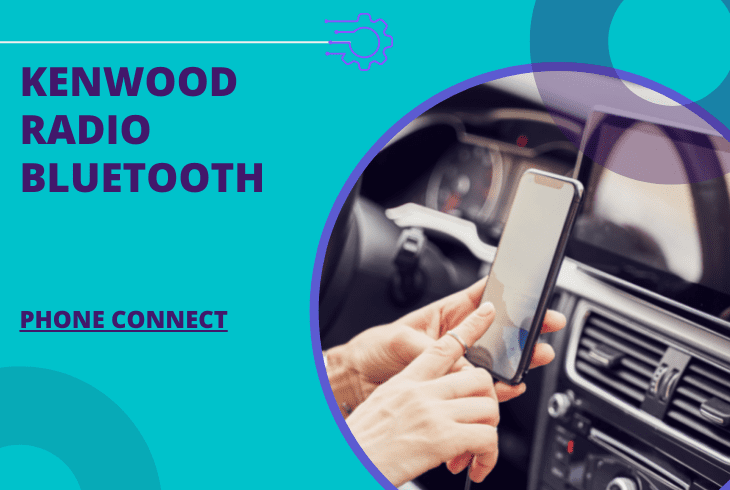 In this guide, we’ll learn how to connect phone to Kenwood radio Bluetooth!

Users often get confused when attempting to find a Kenwood Bluetooth setup guide, since some radios are with touch-display and others do not.

This is why in this guide we’ve prepared a step-by-step tutorial for both generations of Kenwood Stereos so keep reading to learn more!

To connect a phone to the Kenwood Car Radio, users need to make sure that the radio is turned ON and discover the connection of the device into Bluetooth’s list. The Bluetooth connection often carries the model name of the radio so it’s easy for users to recognize.

According to recent research, most Kenwood Car Stereo systems do support Bluetooth, allowing users to connect their smartphones.

This not only allows users to listen to music through the Kenwood Stereo but also perform calls right from the radio’s interface!

The only requirement is to have a Bluetooth-enabled device, such as any smartphone or tablet, and a working Kenwood Stereo System.

It does not matter whether the radio is with or without touch-screen technology since, in this guide, we’ll cover both, new and old Kenwood systems!

How To Connect Phone To (Old) Kenwood Radio?

By “old” we mean Kenwood Car Stereo system without a touch-screen display, therefore we speak about the older units that most 1996 – 2006 vehicles have.

The screen is digital and the radio can only be controlled via the hardware buttons on the front panel.

The older Kenwood radios also support Bluetooth and you can connect your phone!

Step #1 Turn ON The Kenwood Radio

For your Kenwood car stereo to be discovered, it has to be turned ON and on STANDBY mode, allowing the Bluetooth to be visible for external devices.

On some vehicles, the car radio installation might have been modified and will not turn on unless the car engine is also working.

To turn ON the Kenwood Car Stereo, press and SRC button with the power icon!

Users need to make sure that the Kenwood radio buttons are lit and there are indications on the digital screen that the device is working.

Change the play mode to STANDBY and proceed.

Tip: In case the radio is not starting, turn the ignition on and attempt again!

The Kenwood Car Stereo Bluetooth is enabled by default when the device is turned on.

We speak of the Bluetooth of your mobile device that you’re attempting to connect with the radio.

Here’s how to enable Bluetooth on both iOS (iPhone) and Android:

When Bluetooth is enabled, a list of saved connections will appear as well as Available Devices where you’ll find your Kenwood Car Stereo.

However, to learn how to recognize our device from the list where all other connections are found, keep reading the next step!

Step #3 Pair To The Kenwood Radio

To be able to recognize your Kenwood radio from Bluetooth’s list of available devices, you’ll need to take a close look at the front panel of the device.

On the top-right, next to the USB input port, you’ll find the Kenwood Car Stereo Model, written in little white letters.

Based on the model, recognize and select the Kenwood Car Stereo connection.

When you find the connection, select the radio and you’ll see a “Bluetooth Pairing Request” message.

When you select the Kenwood Car Stereo connection on your smart device, on both screens will appear a confirmation message.

Here’s how to enable the connection:

You will see a “Paired” under the Bluetooth connection, which means success!

That was how to connect to Kenwood Bluetooth radio and you can now play any music on your smartphone to be hearing the sound from your car stereo system.

Turn the volume up to be able to confirm that it’s working!

How To Connect Phone To (New) Kenwood Radio?

Above we’ve discussed how to connect a smart device to older Kenwood Car Stereo systems and here we’re going to discuss the same about the more recent models.

When your Kenwood car radio does have a large, touch-screen display, then the steps below are for you!

Step #1 Turn On The Kenwood Radio

The first step is always to turn on the Kenwood radio since the Bluetooth will be working only while the device is up and running.

You can turn on touch-display Kenwood radios by pressing the Power Button which is a small and black square-shaped, on the bottom-left of the screen.

When the Kenwood Car Stereo is turned ON, it’s time to connect.

Note: Some vehicles’ engines have to be running in order for the Kenwood radio to turn on.

The next step is to discover the Kenwood Car Stereo Bluetooth Connection in the smart device’s settings.

However, before we can find the radio’s connection, we’ll need to turn ON the Bluetooth on the smart device.

When Bluetooth is enabled locate the Kenwood Car Stereo Connection!

The radio’s connection will be labeled similarly to the device’s model. You can see the radio’s model by looking at the top-right of the touch-screen display.

The model is written in small white letters. For example, the model of your Kenwood Car Radio could be “DNX775AVS”.

Step #3 Pair To The Kenwood Radio

The final step is to connect the phone to the Kenwood Touch-Display Radio’s Bluetooth.

The only way to do so is to select the radio’s connection in the Bluetooth List.

Then you’ll need to confirm the “Are You Sure To Allow” message on the Kenwood Stereo screen by tapping “YES”.

And to allow the connection on your smartphone’s side, press “OK” on the on-screen prompt, which will get both devices paired.

Soon after the connection is successful on your smartphone will appear a message asking you to allow access to the Phone book and Contacts.

Make sure to press “OK” on this prompt so the contacts can appear on your Kenwood Car Stereo screen.

You’ll see the “Adding Phonebook…” message with a progress percentage.

Wait patiently until the contacts from your smartphone are shared with the Kenwood radio. Now you can select the Phone Icon on your Kenwood Radio and you’ll see all contacts available!

Kenwood Radio Is Not Connecting To Bluetooth…

We’ve learned how to connect phone to Kenwood radio Bluetooth of any kind so based on your device’s model, follow the appropriate steps above.

In case the connection fails, there are a couple of methods that you can use and get your Bluetooth devices connected in no time!

Here’s what you can do to solve potential Bluetooth connection issues:

Here we’ve learned that to connect a Bluetooth phone to a Kenwood Car Radio, we need the device working and Bluetooth enabled on the smart device. From there it’s enough to discover and select the Kenwood Radio Bluetooth connection to be able to pair.

Read Next: My Phone Says No Sim Card Emergency Calls Only?

Now that we’ve learned how to connect phone to Kenwood radio Bluetooth we can listen to our favorite tracks while driving and perform calls without having to hold our phones!

You are now free to explore all of the Bluetooth connection benefits on your Kenwood Stereo System!

We hope that this post was helpful and informational. More relevant “how to” guides in our blog!