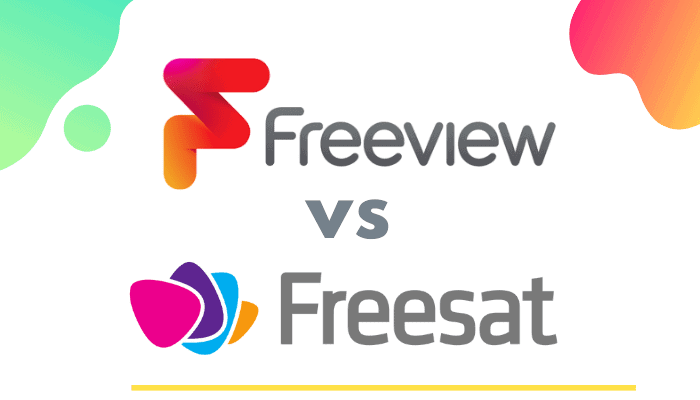 Freeview vs Freesat comparisons are essential for people looking to subscribe to a new TV service provider. They both offer a myriad of digital channels and radio stations to millions of residents in the United Kingdom.

However, with their several similarities, how would you choose between the two TV services?

In this guide, we have compared all the features associated with each entertainment platform to help you decide which service is the best one for you.

Launched in 2002 by Digital UK Ltd and the DTV Services Ltd, Freeview is a digital terrestrial TV service provider in the United Kingdom.

It does not require a monthly subscription so that you can enjoy the nation’s most in-demand TV and radio shows for free. Instead, you would only need to pay a single upfront fee for its installation.

All you would need is to set up a working aerial and a device at home where you could watch its shows.

It is now a lot easier to get access to this TV service as most Modern TVs have a built-in Freeview tuner. You can also purchase a separate and more advanced set-top box for as low as £25.

You can choose from their selection, but all of which may provide you with the following features:

Freesat, on the other hand, is a free-to-air satellite TV service in the United Kingdom launched in 2008 by the BBC and ITV plc.

Since it works via satellite, it is available everywhere in the country and is perfect for people living in areas with poor TV reception.

You can have access to this entertainment platform using a satellite dish and a Freesat box priced for as low as £50.

Similarly, this TV service also does not require a monthly subscription. However, its installation may be more expensive because these mini dishes cost around £100.

Although both Freeview and Freesat are both excellent entertainment platforms, they differ in their features.

Below is a table comparing the characteristics of these two TV services:

If you do not want to subscribe to a monthly package, you can choose between Freeview and Freesat.

READ ALSO :  How to Get Freesat on Sky Box For Free? Valid Methods

These two TV services would allow you to enjoy your favourite shows at home for free.

You would only need to lay money once during their installation. They both have different upfront costs, with Freeview being the more economical option.

When it comes to overall coverage, only 98% of residents can access Freeview programmes on their television screens. However, 15% of this number only receive Freeview Lite with at most 15 channels.

However, the cost of these boxes varies, with Freeview providing a cheaper option to its customers.

They also both allow HD viewing on your television screens. But their picture quality may differ from each other, especially during bad weather.

In terms of usability, Freesat has a catch-up service known as Freetime and allows you to organize and watch your recordings at any time.

On the other hand, Freeview Play incorporates both catch-up TV and live television in one single set-top box.

It allows you to watch all the shows that you missed and provides you with a built-in TV guide.

Although both TV services give you an easy-to-use interface, they are not standard and only come with a much expensive set-top box.

Aside from their set-up, the significant difference between these two TV services is the number of channels they offer. We will look into them in detail in the following section.

All the necessary programmes like ITV, BBC, and Channel 4 and 5 are present on this TV service.

However, some premium channels are not readily available on this platform. You will need to subscribe to a full TV package if you want the following add-ons and shows:

What Channels Are On Freeview?

This TV service gives you access to around 70 standard channels and 15 HD channels, depending on your location.

It also gives you a few +1 versions of their shows and approximately 30 digital radio stations. For instance, only Freeview lets you watch Channel 4 +1 and 4Seven in HD.

Below is a list of available programmes on this TV service:

Newer boxes now offer access to apps, such as Netflix, ITV Hub, UKTV Play, Now TV, and many more when connected to the internet.

READ ALSO :  Recording on Freeview – The The Fool Proof Guide

What Channels Are On Freesat?

Installing a satellite dish instead of an aerial gives you access to more channels available everywhere despite signal issues sometimes.

Believe it or not, you can get over 200 programmes with this TV service. Thus, the Freesat channel list contains a significantly higher number of shows compared to Freeview.

Below is a list of available programmes on this TV service:

Although only 13 of their channels are available in HD, most of their shows have +1 versions.

READ ALSO :  How to Get Freeview on Samsung Smart TV? Quick Guide

Aside from these programmes, most boxes allow you to access Netflix, YouTube, ITV Hub, and many more when connected to the internet.

Freesat vs Freeview  Which Is Better?

Freesat or Freeview are both excellent British TV services, giving millions of resident’s access to their favourite channels and programmes.

Further Read:  Check out our latest guide on Which is The Best Freesat Box to Buy if you are confused which one to buy. If you want to go for Freeview, read our review on Best Freeview Box.

However, choosing which entertainment platform is better still varies from one-person-to-another.

Hence, it would be nice to consider all the aspects we discussed above to determine which TV service is the most suitable for your needs and lifestyle.