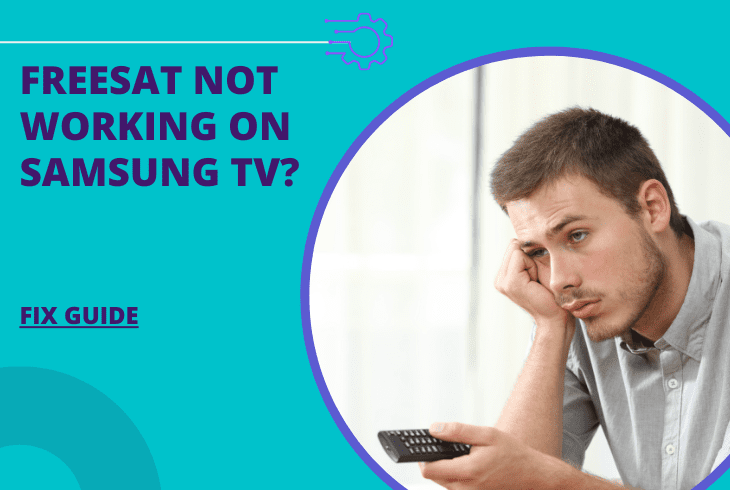 Freesat not working on Samsung TV and you don’t know why? Stay with us!

The Freesat is a separate device that has to be connected to the Samsung TV via HDMI cable and to the satellite input of your home.

Then you can stream both live channels and On-Demand content, which, in turn, requires an internet connection.

When Freesat TV Box is not working on Samsung TV, the first step should always be to reboot our entire equipment. Once we’re ready, both the satellite cable and HDMI connection have to be inspected. In case the fault is not discovered, we need to Reset.

The solution only takes a couple of minutes so let’s first check the possibilities!

Samsung TV Freesat Not Working – Why?

In order to identify the issue we need to know all possible causes first. We can immediately exclude the Samsung TV from the main suspects since it’s only the output monitor.

The general possibilities remain the satellite signal and installation of your Freesat set-to-box.

Let’s unwrap them one by one to be prepared for what we’re about to troubleshoot:

These are ALL possibilities why your Freesat TV Box won’t work on Samsung TV.

The problem you’re experiencing is definitely related to one of them so we’ve made sure to cover them all!

Let’s jump straight into the solution guide and solve the problem in minutes!

The most important part before jumping into the solutions is to make sure that the Samsung TV is plugged into the power and working.

We’re mainly going to focus on the Freesat TV Box installation and setup before checking for anything wrong with your TV.

The very first approach against the problem involves restarting the entire setup which often involves only the Samsung TV and the Freesat TV Box.

It’s not enough to only switch OFF the devices, instead, we’re taking one step further and will also unplug the setup from the power.

This method is called a “power cycle” and refreshes both the software and hardware of your setup.

When the devices manage to cool down, check whether everything is connected and test whether the Freesat TV Box will now work on your Samsung TV.

On the back of your Freesat TV Box, you’ll find SAT IN1 and SAT IN2, which are the satellite signal input ports.

Now would be the best time to reconnect the cable and make sure it’s tightly connected to the satellite input port of your TV Box.

If your Freesat device does not have a camera, you only need to connect the Satellite cable to SAT IN1.

In contrast, if you’re going to capture, you need the SAT IN2 also connected so you can record one channel while watching another.

The most important part of the troubleshooting is to check the HDMI connection between the Freesat TV Box and Samsung TV.

Otherwise, your TV would not be able to output the Freesat on the screen, hence, we can’t proceed without checking the HDMI link.

There are two general suggestions!

The first thing to do is disconnect the HDMI cable from the current Samsung TV input port and use a different input.

Smart TVs nowadays have at least 3 HDMI inputs + HDMI ARC, so it wouldn’t be bothersome to plug your Freesat Box elsewhere.

In case the Freesat TV Box won’t work on the Samsung TV, perhaps the HDMI cable is faulty.

This is pretty much impossible to determine by looking at the cable if the link inside is somewhere interrupted.

In contrast, we can usually see and recognise bad or faulty input ports.

In case we couldn’t identify the problem by addressing almost everything on the Freesat TV Box it’s time to take a look at the Samsung TV.

If you’re not selecting the correct HDMI source, your TV would continue to show a black screen, unless there is an input on the selected source.

To switch the input source, follow the steps below:

In case you’re not quite sure in which HDMI input port you’ve plugged the Freesat TV Box, simply test all sources.

When you see the output of your Freesat box you would know which HDMI port is connected and where to find the feed next time as well.

There are 2 general components that when combined become the power equipment of your Freesat TV Box.

The Power Lead connects to your Freesat TV Box and to the Transformer, which in turn, connects to the Power Outlet.

Quick Tip: The simplest thing to do is remove ALL strips and connect the TV Box directly!

There are 3 x primary light indications that all users should be familiar with:

In case you don’t see a solid blue light upon turning ON your Freesat TV Box, switch the power source and test again.

Proceed only if you’re able to turn on the device and you can operate it.

The final and most-powerful approach is to perform a Factory Reset on the Freesat TV Box!

This is the ultimate solution against any sort of software-related issues that might be impacting the link between the box and Samsung TV.

The downside is that if you were using the TV box in the past, all settings, recordings, and channels will be permanently erased from the device!

Here’s how to perform a Factory Reset on a Freesat TV Box:

When the reset is over, check whether the problem is now solved and whether everything between the Freesat box and Samsung TV is working.

In case you’ve attempted everything in the guide above but nothing managed to help, perhaps the Freesat TV Box is faulty.

In such cases, we shouldn’t open the box at home to see what’s wrong, but take the device for a repair or attempt to use the warranty if it is still intact.

You can reach out to Freesat on their Contact Us Page, during their working hours!

Hence the Freesat TV Box is not working on a Samsung TV because of a faulty HDMI connection or a bad Input Port. The issue can also be caused by a wrongfully selected Input Source on the Samsung TV or a severe software-related problem.

Now that we’ve learned why Freesat not working on Samsung TV and how to solve the problem as soon as possible, we’re ready to enjoy it.

What we’ve learned is that the most important part for a Smart TV to recognise a set-top-box is the HDMI connection link.

In case after reading our guide you’ve identified that the HDMI cable link in your Freesat > Samsung TV setup is the culprit, we got you covered.

Read Next: How to Retune Humax Freesat Box?