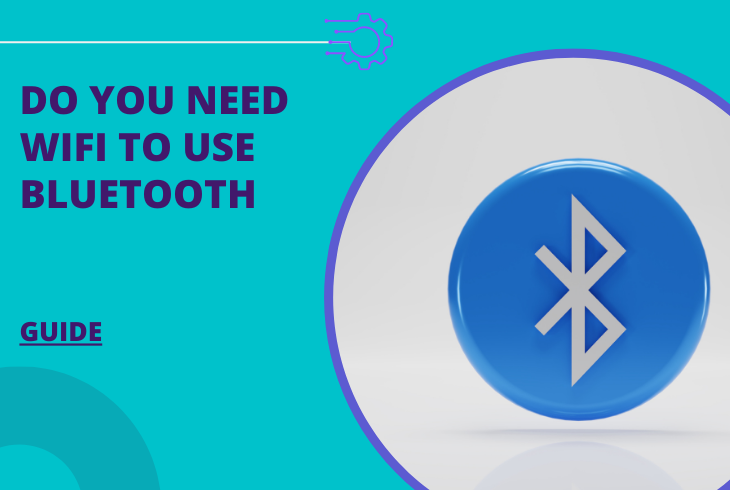 Are you asking this question? Do you need WiFi to use Bluetooth?

Many people appear not to know the answer to this.

Bluetooth is a wireless technology that allows devices to communicate with each other over short distances, usually within a range of about 30 feet.

It does not require an internet connection or access to a WiFi network to function.

This guide will help you understand whether you need a WiFi connection to use your phone’s Bluetooth technology.

Do You Need Wifi To Use Bluetooth?

So, can Bluetooth work without wifi?

You don’t need to have a WiFi connection to use your phone’s Bluetooth technology.

However, in order for a device to communicate with another device over Bluetooth, it must first be paired with that device—either manually or via automatic setup upon the other device being discovered.

If you already have a WiFi network, any new devices being added to your network will automatically be paired with your phone.

You also don’t need WiFi to use Bluetooth, but if there is a WiFi network present, you can use your device’s Bluetooth technology to communicate with devices that are connected to the same network.

To use something like a mobile phone as a wireless modem, you would need both Bluetooth and wifi on.

Basics Of Bluetooth Technology And How It Works

Bluetooth technology is a wireless communication protocol that allows devices to communicate with each other over short distances.

It operates in the 2.4 GHz frequency band and uses a technique called frequency hopping to minimize interference from other devices.

The master device initiates the connection and controls the flow of data, while the slave device responds to requests from the master and executes commands.

Once a connection is established, the devices can exchange data and perform a variety of functions, such as transferring files, streaming audio, or connecting to the internet.

Bluetooth technology is commonly used in a wide range of devices, including smartphones, tablets, laptops, and smart home devices.

Differences Between WiFi and Bluetooth

While they may seem similar at first glance, several key differences between WiFi and Bluetooth set them apart.

WiFi has a much longer range than Bluetooth. WiFi can transmit data over a distance of several hundred feet, while Bluetooth is limited to a range of around 30 feet.

This makes WiFi better suited for transmitting data over larger areas, such as in a home or office.

At the same time, Bluetooth is better suited for short-range communication, such as between physically close devices.

WiFi has a much higher bandwidth than Bluetooth, which means it can transmit data faster and more efficiently.

This makes WiFi better suited for tasks that require a lot of data to be transferred, such as streaming video or downloading large files.

Bluetooth, on the other hand, is better suited for transferring small amounts of data, such as when sending a file from one device to another.

WiFi is compatible with a wide range of devices, including laptops, smartphones, tablets, and smart TVs.

On the other hand, Bluetooth is limited to devices with built-in Bluetooth capabilities, such as smartphones and tablets.

This makes WiFi more secure than Bluetooth, which is more vulnerable to hacking and other security threats.

Bluetooth uses less power than WiFi, making it better suited for devices with limited battery life, such as fitness trackers and smartwatches.

On the other hand, WiFi requires more power to transmit data, which can drain the battery of devices that use it extensively.

WiFi is typically more expensive to implement than Bluetooth, as it requires specialized equipment and infrastructure to transmit data over long distances.

Bluetooth, on the other hand, is relatively inexpensive, as it requires only basic hardware to transmit data between devices.

Common Uses for Bluetooth and WiFi

Here are some common uses for Bluetooth and WiFi:

✅ Streaming music or video from devices to speakers or TVs

✅ Sharing internet connection between devices (e.g. using the phone as a hotspot)

✅ Connecting devices to other devices for data transfer (e.g. fitness tracker to phone)

How Bluetooth and WiFi Can Be Used Together

Bluetooth and WiFi can be used together in a number of ways.

One way is through the use of a Bluetooth WiFi bridge.

A Bluetooth-WiFi bridge allows a device that is equipped with Bluetooth technology to connect to a WiFi network and access the internet.

This can be useful for devices that do not have built-in WiFi capability or for situations where a device is out of range of a WiFi network but is within range of a Bluetooth connection.

Another way that Bluetooth and WiFi can be used together is by using a device equipped with both technologies.

Many modern smartphones, tablets, and laptops are equipped with both Bluetooth and WiFi capabilities, which allows them to seamlessly switch between the two technologies depending on the availability and strength of the signal.

This allows the device to take advantage of the benefits of both technologies.

This includes the ability to connect to a WiFi network for faster internet speeds or the ability to use Bluetooth for short-range, low-power communication with other devices.

Security Considerations for Bluetooth and WiFi

For Bluetooth, it is important to ensure that devices are paired with each other securely, using a secure method such as Bluetooth Secure Simple Pairing.

It is also important to keep the Bluetooth software on devices up to date to ensure that any vulnerabilities are patched.

In addition, it is advisable to use a strong and unique PIN code when setting up a Bluetooth connection.

For WiFi, it is important to use a secure encryption method, such as WPA2, to protect against eavesdropping.

Using a strong and unique password for the WiFi network is also advisable.

It is also a good idea to keep the WiFi router’s firmware up to date to ensure that any vulnerabilities are patched.

In addition, it is important to be cautious when connecting to unfamiliar WiFi networks, as attackers may set them up to intercept data.

So, do you need WiFi to use bluetooth? Bluetooth does not require an internet connection or a WiFi network to function.

You can use Bluetooth to connect devices such as smartphones, tablets, and laptops to headphones, speakers, and other devices that support Bluetooth, as long as they are within range of each other.

Read Next: How to Use Alexa as Bluetooth Speaker Without WiFi?