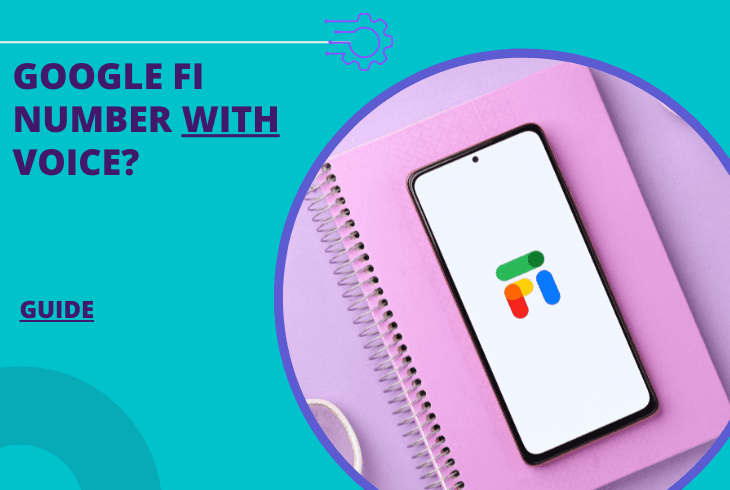 Google has a lot of innovative services, and you may wonder, “can I use my Google Fi number with Google voice?” After all, this hasn’t always been a possibility.

For several years, Google Voice and Google Fi were heavily integrated. Anyone signing up for Fi had to give up their Voice accounts.

It was impossible to use the services under the same Google account.

This is no longer the case; now, it is possible to use your Google Fi number with Google Voice.

Google has now separated Voice and Fi, which means using them on the same Google account is possible. No longer must you choose one or the other.

Learn more about using Google Voice and Google Fi and the benefits they offer with this guide.

What Are Google Fi and Google Voice?

Google Fi isn’t your traditional MVNO. Rather than having to stick with a single carrier for your service, Google Fi uses a combination of U.S. Cellular and T-Mobile towers.

This provides you with the best signal possible, no matter where you are or where you go.

Choosing from several unlimited plans is also possible if you want to avoid per-gig pricing.

With Simply Unlimited, you can access the U.S., and Unlimited Plus provides travel data options.

Google Voice gives you a phone number and lets you receive and make calls at no cost. Google Voice can be used for your computer, and the service works over your Wi-Fi signal, making calls simple.

Google Voice also offers transcription services for any voicemails and allows you to forward your cars when needed.

There are some specific and important differences between Google Voice and Google Fi.

Use this table to better understand what they are.

How Do Google Fi and Google Voice Work Together?

As a result, it’s possible to have separate Voice and Fi numbers on one Google account.

With this feature, it’s possible to have two numbers with unique purposes.

For example, you can have one number for friends and family and one for professional or work calls.

Setting up forwarding with Google Voice or Google Fi means you can receive calls from both your numbers in a single, central location.

It’s possible to use Google Fi number on Google Voice, which is a feature Google created to make managing calls easier.

Are you wondering, “is Google Voice and Google Fi the same?” The answer is no, they aren’t the same, but they can be used together.

It’s possible to have your Google Voice and Google Fi numbers in one account.

Before doing this, you must sign up for the Google Fi service.

Before using Google Voice and Google Fi together, you must sign up for a Google Fi account.

To do this, use these steps:

If you used Google Fi in the “early days,” you may have moved your number for Google Voice to Fi. This was a requirement to use the service.

Now that you don’t have to choose, you restore the Google Voice number you used to have and request a new Fi number.

It’s possible to have both a Google Voice and Google Fi number in the same Google account.

If you want to move the number you are using for Fi back to Voice and request a new Fi number, you can.

Google will walk you through the process, but it can take up to 24 hours.

How to Use Google’s Services Simultaneously

While you can use the services and numbers on one Google account, the process isn’t as simple as it may seem.

It’s necessary to set up call forwarding (learn how below) and send all incoming communications from one account and number to the other.

Forwarding your calls isn’t hard, but you must have a second Google account.

You don’t have to use this second account very often, but you can’t get rid of it.

How to Set Up Call Forwarding

To set up call forwarding, which is necessary to use Fi and Voice together, you must do the following:

Once this is done, using Google Voice and Google Fi should be possible.

Can I keep my Google Voice number with Google Fi?

If you have decided to port the Voice number to the Fi service, you can choose the option when signing up for Fi (process explained above).

To do this, you must unlock your Google Voice number first.

The Fi and Voice services are now working together. You can have separate Voice and Fi numbers on one Google account.

The numbers can be used for different purposes. There is no plan or report from Google that Fi will replace Voice.

The rate for making international calls is also reasonable. You can receive texts and calls for free when you are in Mexico, the U.S., or Canada.

How long will it Take to Activate your Google Fi account?

If you plan to transfer your existing number to Google Fi, there could be a delay that lasts for about 24 hours.

After this delay, you can start sending and receiving text messages.

You should restart the phone if the features don’t work in 24 hours after starting the activation process.

When doing this, you need to be in the United States, or it probably won’t work.

Final Comments: So, Can I Use My Google Fi Number with Google Voice?

Now that you know the answer to “can I use my Google Fi number with Google Voice,” it’s time to do it.

This feature has been available for several years now and allows you to access both features from Google.

With Fi and Voice working together, you have a way to separate personal and business calls that is not only effective but affordable.

For those who need to manage things in a hassle-free way, these services deliver the solutions you have been searching for.

If you have questions or concerns about using these services together, you can reach out to Google Customer Support.

Read Next: How to Find Google Fi Account Number?