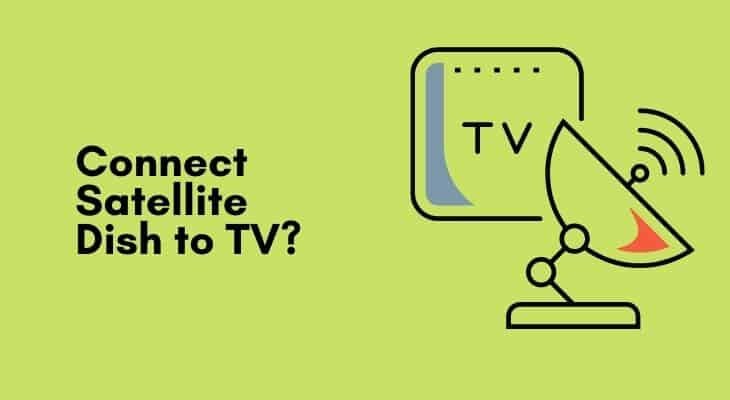 Can I connect satellite dish directly to TV? Or perhaps you want to know if your brand-new Samsung TV supports this device? Don’t fret because you will get all your answers here.

Televisions have become an essential part of our daily lives. With the entertainment they give, most of us would have one installed at home.

But not everyone gets their channels in the same way. Here, we will answer the most asked questions about your satellite dish.

What Are Satellite Dishes?

Cable TVs come with monthly subscription fees. But that does not mean you can no longer have some fun.

You can still get an extensive line-up of channels on your television without paying a single cent. You only need a device known as a satellite dish.

Most of us have seen devices attached to our rooftops at least once in our whole lives. A satellite dish looks like a plate, while an aerial has long cylindrical parts.

These two devices broadcast over-the-air radio and TV programs to our homes. But there is a massive difference in how they get their signals.

READ ALSO :  How to Get BT Sport on Freeview – Quick Guide

Generally, TV aerials receive frequencies not over 1 GHz (or 1000 MHz) from land-based transmitters. Meanwhile, dishes work with frequencies of 10 to 12 GHz from satellites.

Because of this, the latter relies on its low noise block downconverter (LNB) to convert the frequency to a much safer value.

LNBs typically go as low as 70 MHz. Afterwards, a receiver or set-top box decodes these signals, allowing your television to read them.

In terms of channels, aerials give you access to Freeview programs. Meanwhile, satellites provide you with Freesat shows.

The latter also tends to have more channels because it receives more frequencies. It also gives you excellent audio and video quality.

Since the two work differently, you cannot use one for the other. But if you only need the necessary channels, you really won’t have any problem between the two.

You can still get BBC, ITV, or Channel 4 and 5 programs with both devices.

Can I Connect Satellite Dish Directly to TV: Details You Should Know

If you have a satellite dish, you may have asked if you can connect it directly to your television.

Or perhaps, you have also wondered whether it’s about time to get a receiver. Whatever your question is, see the answers below:

Can I Connect Satellite Dish Directly to TV?

To put it simply, you cannot connect your satellite dish directly to your TV. Since this device receives higher frequencies, they need to convert them first to a much lower value.

Generally, a frequency less than 1 GHz is safe for your device.

Your set-up will typically include a coaxial cord, receiver, and an HDMI cable. But more recent smart TVs now come with built-in receivers.

Because of this, you can connect your dishes directly to your television.

However, not all TV brands and models have this function. Only those with dual tuners can perform this under one roof.

Even Freeview TV models support this, giving you Freesat channels.

READ ALSO :  How to Get Freeview on Samsung Smart TV? Quick Guide

Can I Connect Satellite Dish Directly to Samsung TV?

If you thought about the question, Can I connect satellite dish directly to Samsung TV?, then you may be in luck for an exciting surprise. In some cases, you can!

Samsung has a history of providing you with convenience without compromising your entertainment.

It has high-end smart TV models that can do wonders when you connect them to a dish. You can maximize your device all thanks to their built-in receivers.

Some of the benefits you get include more than 200 channels. However, you won’t have access to some Freeview programs.

But this won’t be a significant loss since you still get BBC, ITV, and more.

How to Connect Satellite Dishes To TV?

There are two ways to get over-the-air programs on your television screen – directly from a dish or through a receiver.

Below let us look at these two easy techniques:

The easiest way to receive satellite programs is by connecting your dish directly to your TV.

READ ALSO :  How to Get More Channels On Freesat – An Exclusive Guide

But this technique only applies to models with dual tuners.

Check out the steps below if you have one:

Depending on your TV model, you may see two SAT ports. If so, connect your coaxial cable into the main SAT port.

But if you are not sure whether your television has built-in dual tuners, you can consult your manual.

You can also check out its features on the internet.

Connecting Through A Receiver

Alternatively, you can receive over-the-air shows through a receiver. If you have one at home, look through the steps below:

READ ALSO :  How to Get Catch Up TV On Freeview – Fool Proof Guide

Can A Satellite Dish Be Used as A TV Antenna?

Generally speaking, you cannot use dishes as an aerial. Satellites can only receive ultra-high to very high frequencies from space. So, it would almost be impossible for you to get channels broadcasted from terrestrial transmitters.

However, you can repurpose your dish to allow it to receive radio waves. Just go through our tutorial below to learn how you can use your satellite as an antenna:

Before we start, make sure you have all your materials prepared. You’ll be needing a clip-on antenna and a long coaxial cable. You may also need a set of pliers and a ladder.

Aside from preparing your materials, ensure that your receiver is off. Make sure to remove its power cord for added safety. Afterwards, place your ladder below your dish.

2 – Remove the aerial from your Dish

Once the ladder is in place, climb up to reach your dish. Afterwards, remove the aerial found at the mounting clamp of your satellite.

3 – Attach the clip-on aerial to your Dish

The next step is to attach your clip-on aerial at the back notch of your dish. Position its housing to the centre to ensure that it’ll work well. Make sure that the logo of your aerial is also faced outwards.

4 – Run your coaxial cable back into the House

Connect one end of your coaxial cable into the Out port of the aerial. Then, run the cord back into the house. From there, plug the other end into the Antenna In port of your receiver.

5 – Turn on the Television

After connecting the coaxial cable to your receiver, plug its power cord back in. However, make sure to leave it turned off. The next thing you should do is to switch on your TV and put it in Antenna mode. Finally, retune your TV to get a new line-up of channels.

Can I Use A Sky Dish as An Aerial?

Similarly, old sky dishes won’t work as an aerial unless you repurpose them. Just follow the step-by-step guide in the previous section to learn how you can do it.

But this set-up does not guarantee it’ll always work. It may also cost you a lot since you’ll be purchasing additional parts. So we highly suggest upgrading your equipment instead of repurposing it.

Can You Connect A Freeview TV To A Satellite Dish?

Now that we can differentiate dishes and aerials, you may have wondered whether you connect your satellite to your Freeview TV. Don’t worry because this is a frequently asked question thanks to Freeview’s superb channel list.

So this brings us to our next question, Can you connect Freeview TV to a satellite dish?

Although you can connect a dish to your Freeview TV, we can’t guarantee you’ll get the same viewing experiences. You won’t be able to watch Freeview shows on your screen. Instead, you’ll get Free-To-Air satellite channels.

But beware because the programs will be scattered. You may also have multiple Channel 4 shows on your line-up.

But if you want to get up to 200 more channels on top of ITV and BBC, you can use an old Sky set-top box. Alternatively, you can purchase a Freesat box or an aerial.

How to Connect Satellite Cable To TV?

Whether you want to watch binge-worthy shows or listen to the news, satellite cable gives you all these for free. So, if this excites you, here’s how to connect satellite cable to your television:

1. Connect the receiver to your dish

The most crucial step in getting satellite cable on your television is to connect your receiver to your satellite dish. Otherwise, you won’t be able to access any channel on your screen.

To do this step, look for the coaxial cable connected to your dish. Afterwards, plug the other end to your receiver’s SAT IN port.

2. Connect the receiver to your television

Once you have that ready, connect your receiver to your television. For this step, you’ll need to check what ports you have on your TV. Afterwards, follow any of the methods below:

If you have HDMI ports, connect an HDMI cable to your receiver and television.

If you have Audio/Video jacks, connect an RCA cable to the Out and In port of your receiver and television, respectively.

If you have Antenna In terminals, connect another coaxial cable to your receiver and television.

The last step is to plug your receiver and television into the wall outlet. Just wait for a few minutes before switching them on.

Afterwards, ensure that your television is in the same input as your cables before retuning it. Now, you can access hundreds of local channels for free.

Let’s Wrap It Up!

If you want to get subscription-free shows on your television, then satellite dishes are your friends.

But can they connect directly to your TV? Or would you need to purchase a receiver?

To cut it short, you cannot connect your satellite dish directly to your television without a receiver.

But this only applies to models with no dual tuners. Newer Samsung smart TVs allow you to plug your satellite directly to your television.

We hope this guide answers our opening question, Can I connect satellite dish directly to TV?

Read Next: Learn how to get Freeview on TV without the use of any aerial.