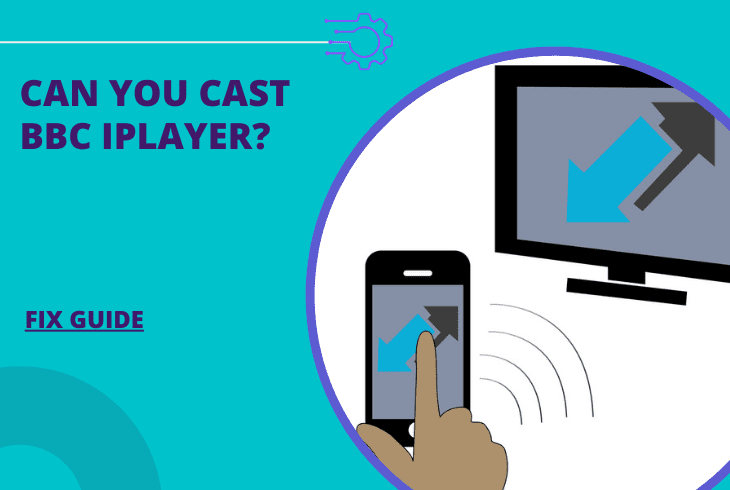 Wondering – Can I cast BBC iPlayer? Yes, there are multiple ways to do so!

In this guide, we’ve included ALL possible methods to share the screen of your mobile device with the TV to stream BBC iPlayer on a big screen.

Ultimately, we’ve found a way to cast BBC iPlayer from Android and iOS devices to almost any TV or Smart TV.

In order to cast BBC iPlayer, you’ll need a TV with an HDMI input and a Chromecast Plug to mirror the screen on even iPhones. For Smart TVs, we can use the “SmarView” to share the screen of our Android device or get an HDMI Adapter for a wired connection.

Let’s next explore more about screencasting BBC iPlayer on a TV!

Can I Cast BBC iPlayer To My TV?

In case you didn’t know, with Android and Apple TVs, you don’t need to “cast” BBC iPlayer instead you only need to download the app.

From there, using your smartphone you can sign in to the application and start streaming directly on your TV.

What do we do when our TV can’t have the BBC iPlayer app?

Well, any TV with an HDMI input can have BBC iPlayer content on the big screen.

There are quite a few ways you can “screencast” or share the content from your smartphone to the TV.

Here are the possible ways to cast BBC iPlayer on a TV:

The question “can I cast BBC iPlayer?” should now be clear. It doesn’t really matter, whether you use an Android or iPhone to host the BBC iPlayer application.

Throughout the guide, you’ll find a working method for both operating systems.

Let’s begin with the most popular and best-working way to cast BBC iPlayer on a TV!

How To Cast BBC iPlayer with Chromecast?

The Chromecast Plug is a device that plugs into one of the HDMI inputs of your TV, regardless of whether it’s smart or not.

Then, by selecting the correct Source, you can connect the device to WiFi, allowing you to cast the screen of your Android or Apple device.

Let’s check how to cast BBC iPlayer on a TV using a Chromecast:

Once you’re connected to the Chromecast, you can share the screen of your Android or iPhone device to the TV screen.

When you’ve got a Chromecast, you can easily cast the screen of your computer device by downloading and installing Google Chrome Browser.

Then by going to Settings > Cast, you’ll be able to detect your Chromecast and share the screen of your computer.

How To Cast iPlayer with an Android Phone?

When you don’t have a Chromecast, there is a way to cast your Android device’s screen to smart TVs.

Pay attention, Smart TVs. A non-smart TV won’t have a screen mirroring feature, hence, can’t be connected to other devices and display their screen contents.

On your Smart TV:

On your Android phone:

The screen of your Android phone will appear on your big TV display. You can now start streaming the BBC iPlayer content on an Android smartphone.

As long as you keep streaming from your device, the content will appear on the TV screen.

How To Cast iPlayer with an HDMI Adapter?

This is one of the best ways to share the screen of almost any phone, Android or Apple, which is actually a wired connection.

Since there are multiple types of HDMI adapters, we can easily connect one end to our BBC iPlayer device and the other to the HDMI ports of our TV.

There are 3 types of HDMI adapters that can help:

Based on your device, you can scroll to the bottom of the guide and purchase the HDMI adapter you need.

Then you simply need an HDMI cable to connect to the adapter and your TV to be able to cast the screen of your mobile on the big screen.

How To Cast iPlayer with a “Screencast” App?

There are quite a few different applications in the mobile app store that you can download and use to cast the screen of your mobile device.

With an iPhone or an iPad, you’ll find it really difficult to set one of them up and share the screen of your device.

In contrast, Android devices make most of them work, so it’s worth trying. Even when you try to screencast to your Fire TV or Firestick.

We’ve tested some of them and they work:

You can find these applications in Google Play and App Store. You can then use them to share the screen of your device with your TV and stream the BBC iPlayer content.

How To AirPlay BBC iPlayer on an Apple TV?

When you’ve got an iPhone or iPad in combination with an Apple TV, getting BBC iPlayer on the big screen is easy.

Don’t forget that the BBC iPlayer app is available in the App Store, therefore you can simply install the app and sign in using your secondary device.

However, in case you want to keep your TV’s memory clear and simply AirPlay the BBC iPlayer content, we’ve got you covered.

Here’s how to AirPlay BBC iPlayer on an Apple TV:

Once the screen of your iPhone appears on the Apple TV screen, you can open the BBC iPlayer application and start streaming.

You can also AirPlay the content from your iPhone to a Macbook and iMac the same way as your Apple TV.

Let’s recap what we’ve learned so far in this guide!

Thus, you are able to cast BBC iPlayer from Android and iPhone to any TV as long as there is an HDMI input. For a wireless screencast from any Android device to a Smart TV use “SmartView” or connect an HDMI adapter for a wired connection.

Now that we’ve answered – “can I cast BBC iPlayer”, it’s now clear that there are multiple ways that work.

We now also know that we can cast BBC iPlayer from Android and iOS to almost any Smart and Non-Smart TV as long as there is an HDMI input.

Looking for a Wired Connection?