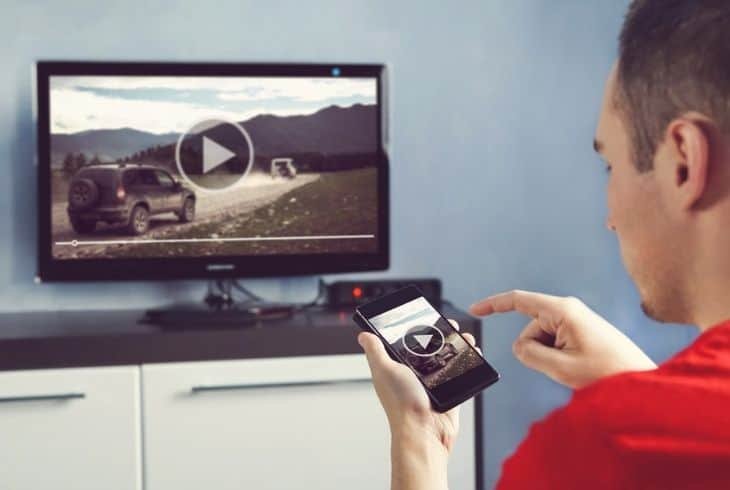 The best screen mirroring app for Roku helps seamlessly share the content your view on your phone to your television via Roku.

Whether you’re looking at your photos, video content, a web browser, or even listening to music, you can stream that content through your TV.

There are, unfortunately, many inconsistencies with regards to features offered by the various mirroring apps.

For instance, some mirroring apps support both portrait and landscape mirroring, while others do not. Furthermore, the amount of lag time varies among different apps.

At any rate, the best screen mirroring apps will allow your phone, tablet, or computer to stream content to your big screen TV.

Why You Need a Screen Mirroring App for Roku

Sharing your favorite YouTube videos and personal photos you’ve taken on your phone with friends and loved ones is challenging.

READ ALSO :  How Do I Add a Second Roku to My Account?

If you’re at a family gathering or you want to show a group of friends something on your phone, it’s challenging without a screen mirroring app.

Instead of passing around your mobile phone or flashing your screen at everyone for a fraction of a second, it’s much more convenient to send that data to a big screen TV.

There are four key considerations to make when searching for the best screen mirroring app for Roku TV.

The first of which is user review ratings, because, obviously, they will help you spot a lemon. Many of the mirroring apps have only average rankings.

Secondly, you’ll want to consider lag time. Delay and latency are common among mirroring apps. But if the lag time is too great, you won’t be able to play games with a good user experience.

Thirdly, you also need to consider which cell phone platforms the app supports. It seems that the vast majority of mirroring apps support either Android or iOS, but not both.

And finally, you may want to know what other device platforms the app supports in addition to Roku. For example, you may be interested in an app that also supports Amazon Fire Stick or Chromecast.

This handy app has a lot of great features and versatile compatibility with Roku devices, including the Roku TV, Roku Stick, and Roku box.

It claims it is the number one screen mirroring app, though I think that’s analogous to a pizzeria claiming they have the “best pizza in the country.” The claim isn’t backed up by awards or testing.

Nevertheless, it does support any Android device running version 5.0 and later. I was, however, disappointed to see that it does not support Apple devices. It did, however, garner 3.7 stars from user reviews, which is fairly decent.

This app was developed by a company called LQL Studio. Unlike the previous mirroring app, this software doesn’t support Android devices. Instead, note that it was developed with the sole intention of mirroring iPhone screens to your television.

I would like to point out that this app only works over a LAN (Local Area Network), as do most mirroring apps, so your television would need to be connected to your router.

READ ALSO :  What to Do If Roku Won’t Connect To Wireless Network

Furthermore, I liked that this app supports LG, Samsung, and Smart TVs in addition to Roku.

Developed by AirBeamTV, this app lets you watch movies and play games on your smartphone through your television.

Additionally, I should mention that this app doesn’t support Android. Instead, it supports iPad, iPhone, and MacOS.

The developers offer a free trial of the MacOS app. Unfortunately, the developers claim that this app isn’t compatible with gaming.

The reason it’s not great for playing games is because of an unfavorable 2-3 seconds of lag between the phone and the television, which is not uncommon among competing apps.

I did notice, unfortunately, that MeisterApps excluded gaming as an ideal use, though they didn’t explicitly mention any lag time. Furthermore, this app received a 2.9-star rating out of 5.0 stars.

I would have preferred a higher rating, but many mirrors and casting apps have ratings in the 1.0 to 3.0-star range.

I imagine that many users give the apps a low rating because they only support Android or iPhone, and not both, so the user is disgruntled when it doesn’t work with their phone.

READ ALSO :  How to Get Peacock TV on Roku – Fool Proof Guide

It has many features common among other mirroring apps, including the following:

One thing that really impressed me about this app is its immensely high rating in the Apple App store, where it received 4.8 stars out of 5.0 stars. Plus, it had over 7,500 user reviews, so not only is it popular, but it provides a good user experience.

As you may have guessed by the name, this next app was developed by Apple, and as such, only supports Apple devices (sorry Android users). Airplay allows users to share common formats of content (videos, photos, music, etc.).

READ ALSO :  Why Is Tubi TV Not Working On Roku? Quick Fix

But one thing I liked about Airplay was that it doesn’t only allow you to share the content with your television; instead, it syncs with multiple other devices. In addition to smart televisions, Airplay connects to Apple TV and even speaker systems.

Like many other mirroring apps, AirPlay boasts a one-tap feature to make pairing your phone with another device quick and painless.

If that weren’t enough, it even connects to other Apple services like iCloud, so all of your personal media files are only a tap away.

Last but not least is Mirror Screen to Roku. It isn’t as full-featured as some of the other alternatives, but it is a good backup option if you couldn’t get your mirroring setup to work properly on OSX devices.

READ ALSO :  How To Connect Phone To Roku TV Without WiFi? Best Methods

This app is tailored to work with Apple devices, so Android users are out of luck.

It does have relatively decent features and covers all of the bases, allowing a user to mirror movies, web browsers, photos, music, and show presentations to their Roku device.

Naturally, I would have preferred a higher rating, but this level of user reviews seems to be par for the course regarding honest reviews.

Read Next: Can You Use a Universal Remote on a Roku TV?

Oddly enough, it seems that the market for the best screen mirroring app for Roku is weighted in favor of supporting Apple products instead of Android devices for mirroring functionality.

Typically the reverse is true because Android is the number one leading smartphone operating system in the world with approximately 73% market share.

Nevertheless, there are a handful of Android mirroring apps out there that work well. Lastly, I would advise you to try more than one app.

Some of the app developers are small businesses or individuals who don’t have the financial wherewithal or coding team to update their apps in accordance with new Android and iOS updates.