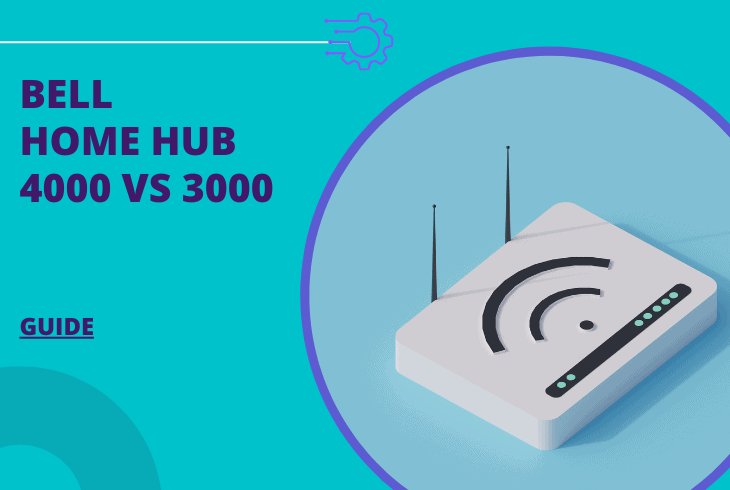 If you are thinking about getting Bell Wi-Fi you must compare Bell Home Hub 4000 vs 3000.

The Bell HH4000 is the new version of their internet device, which replaces the BHH 3000. If you have been using the 3000, you are probably used to it.

As a matter of fact, the BHH 3000 has proven effective in offering decent speeds for most home devices.

Besides the issues of range and speed, there are also key hardware changes. However, these changes could completely affect the way you enjoy your internet.

Keep reading to find out more.

Reasons Why BHH 4000 is Better For the Future

It is not easy to pick between BHH 4000 and 3000. The main reason is that one is better for the present while the other suits the future. That is how technology works.

The Bell HH 3000 was made to offer users more freedom. However, that freedom is being taken away with the more advanced BHH 4000.

The 3000 version is much slower in terms of Wi-Fi speed. However, it is more compatible with third-party hardware.

To fully understand what this means, we must look at the differences between the BHH 4000 and BHH 3000.

The first noticeable difference between Bell Home Hub 3000 vs 4000 is the Wi-Fi speed. One thing that the new version brings to the table is more speed.

Unfortunately, the improvement in speed is not for all. You will only be able to enjoy Wi-Fi 6 if you have Wi-Fi 6-ready devices.

This means that, if you are still using your old TV that is only compatible with Wi-Fi 5, buying the new BHH 4000 won’t make any difference.

However, if you have Wi-Fi 6 compatible devices, you will enjoy:

Difference #2 BHH 4000 Has no Battery Backup

What this means is that you do not have to stop working just because power is interrupted. Your BHH 3000 continues working giving you chance to round up your business.

The new version, BHH 4000 does lack battery backup. Although you have a chance to purchase a UPS, it is an extra cost. On this point, the BHH 3000 wins.

The other major factor to consider when comparing Bell Home Hub 3000 vs 4000 is range.

In the BHH 3000, there were connection issues even within the same backyard.

However, 4000 does not even need pods to connect in your backyard. Most users have confirmed that it has a better reach compared to 3000.

The main benefit in terms of range for the BHH 4000 is that:

Remember that for those who are targeting Wi-Fi 6, you should not expect to use it at a distance.

The BHH 4000 is designed to select between Wi-Fi 6 and 2.4GHz automatically. When you are a long distance from your hub, the best option is 2.4GHz and not Wi-Fi 6.

When it comes to the hardware, the BHH 3000 is much better for most users.

Besides having an internal battery, the BHH 3000 also has removable SFP hardware.

This means that you can use your preferred modem or router with BHH 3000.

On the other hand, the SFP on BHH 4000 is permanent. If you choose to go this way, you must be willing to use the Bell Home Hub alone.

For those who have 1GB ready devices that use ethernet, you can enjoy much faster speeds on BHH 4000 than on 3000.

You can actually use your BHH 4000 without extender pods. Most users have confirmed that the range attained by the new device is impressive.

For a device that can attain 300ft at good speeds, you may not need your pods.

With that in mind, there are still a few scenarios where you will need your pods. For homes with concrete walls and many rooms, you may need to use pods.

If you will be using extender pods for your BHH 4000, be ready to buy new ones.

The previous pods that were used on BHH 3000 were designed to support Wi-Fi5. The good news is that there are new Wi-Fi 6 supporting pods from Bell.

When you order our new pods, specify that you want the new Wi-Fi 6 supporting pods.

If you will go buying a BHH 4000, make sure you get the latest version. There is a newer version that has the wording “Gigabit” on the front.

If you are ordering online, specify that you want the “Gigabit” version.

In theory, Wi-Fi 6 supports speeds of up to 10Gbps and is seen as a superior connection. However, this is usually not the case in real-time.

In real performance, congestions, lags and many other factors affect your internet speed.

Why Gigabit Stands Out

The Gigabit version of BHH 4000 uses the 6GHz band. This is a band that expands your bandwidth and increases internet speed.

On 6GHz, there is no congestion. There is less traffic on the router hence your device can enjoy unlimited access to your bandwidth.

The only catch with Wi-Fi 6E is that many devices are not compatible.

As a matter of fact, most homes do not have Wi-Fi 6-ready devices. Going for BHH 4000 consequently calls for an upgrade to your devices.

At this point, you have already taken a position as to which of the two you prefer. There are those who will prefer BHH 3000 while others will go for 4000.

It is a tough call to make considering the different aspects. However, the BHH 4000 stands out given that it is geared towards the future.

The BHH 3000 is good in terms of freedom and hardware. However, if your goal is to have a better internet connection, BHH 4000 is the way to go.

The lack of a backup battery is one of its major undoings. Even so, it is still better in terms of range and speed compared to the BHH 3000.

Read Next: Why is My Bell Internet So Slow?