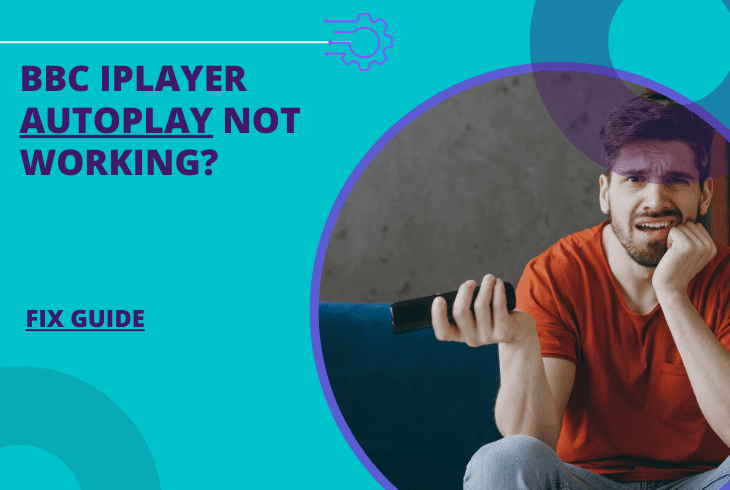 Wondering why BBC iPlayer Autoplay not working? Let’s find out!

We all know that BBC iPlayer allows users to watch Sports, Documentaries and the latest TV series all in one place.

However, sometimes we just want to lean back and watch through the episodes of our favourite TV show but Autoplay won’t start the next episode.

The BBC iPlayer AutoPlay has to be enabled so the next episode starts automatically when the current playback ends. Based on the device you’re using (mobile, TV or computer) the way to turn ON/OFF the AutoPlay feature is quite different.

Let’s next learn more about AutoPlay and the reasons why it’s not working!

Why Does BBC iPlayer AutoPlay Does Not Work?

We all know that when AutoPlay is enabled, when our episode is finished the next one should start automatically, without our interaction.

However, here we’ll explore the reasons why AutoPlay is not working on your BBC iPlayer app and later attempt to solve the problem!

Here’s why the AutoPlay on BBC iPlayer might not be working:

If one thing is certain is that when we enable the feature, the next episode should start automatically.

When it doesn’t we know that something is wrong so let’s learn how to fix it.

How To Fix When BBC iPlayer Autoplay Not Working?

In this guide, we’re going to undertake a few solutions that will help us not only solve the AutoPlay problem on the BBC iPlayer app but also identify the cause.

We’re going to cover ALL occasions including the app on a mobile smartphone, TV app and desktop (browser) platform.

Let’s begin with the obvious!

It’s easy to understand that the feature won’t work when it’s not enabled.

Well, you could have enabled AutoPlay previously, but after closing the app or desktop browser the settings might have been reverted.

This happens on a desktop, this can occur when the Cookies are cleared.

Let’s now learn how to enable AutoPlay on ALL different BBC iPlayer platforms:

Enable AutoPlay on a TV App:

Enable AutoPlay on a Computer:

To enable the AutoPlay feature on a computer is the easiest thing ever!

Enable AutoPlay on a Smartphone App:

Now when you’re confident that AutoPlay is enabled, test whether the next episode will start automatically.

You can skip to the end to test so you wouldn’t wait for the entire episode length.

In case AutoPlay has been enabled in the previous solution but the next episode simply does not start, check if you’re currently watching the very last episode from the season!

In case that’s not what’s causing the problem, you’ll need to reboot your source device!

Keep the device turned OFF for a few minutes and then re-open the BBC iPlayer application to test whether the AutoPlay is now working.

Don’t forget to double-check if the feature is enabled.

Solution #3 Reconnect To the Internet

Another reason why the next episode of your BBC iPlayer show won’t start automatically is that your device has been disconnected from the internet.

In those cases, the current episode will keep buffering or the next in the line won’t be able to start.

Here’s how to reconnect your device to the internet:

To keep it simple, you need to make sure that your device is connected to a reliable and working WiFi to be able to stream content and AutoPlay episodes.

In case the problem is persistent and the next episode won’t automatically start, proceed with the next step!

Sometimes the problem with the AutoPlay on your BBC iPlayer is related to the application functionality, therefore it needs to be refreshed.

The cache data is the primary suspect when we speak of corrupted files, hence in this solution, we’re going to learn how to clear the cache!

On a desktop, we use the official BBC iPlayer website to stream content so instead of deleting the app cache, we need to remove the browser’s Cache & Cookies.

You will be disconnected from your BBC account once the application or browser cache has been deleted.

You need to Sign-in, enable AutoPlay, follow solution #1 and test.

The next step is to check whether our source device and BBC iPlayer application are both up to date.

Since outdated firmware versions lack support, we can’t proceed further before checking whether the most recent software is installed.

You can update the BBC iPlayer app easily:

When you’re up to date, test whether the AutoPlay is now OK!

The final and most powerful solution is to perform a clean BBC iPlayer app reinstallation!

This will remove and reinstall ALL services from scratch, therefore any potential process failures should not be present after the installation.

Let’s jump straight into the steps!

Let’s next answer one of the most frequently asked questions in regard to BBC iPlayer AutoPlay:

In case you have to enable AutoPlay each time you exit the BBC iPlayer platform then you’ve probably declined the Cookies upon first entering.

What you need to do is go into your browser settings, and clear the Cache Data and Cookies.

Now when you come back to BBC iPlayer, accept the cookies so your settings can be saved.

This is the end of our solution guide so let’s take a look at what we’ve learned!

Thus, the AutoPlay on BBC iPlayer will not work when it’s not enabled or when your source device is not connected to the internet. Furthermore, users should update their BBC iPlayer applications and clear the cached data when similar issues start to occur!

Read Next: How to Get BBC iPlayer on Virgin Media?

Now that we’ve learned why BBC iPlayer Autoplay not working and how to solve the problem we can binge-watch an entire show without changing episodes.