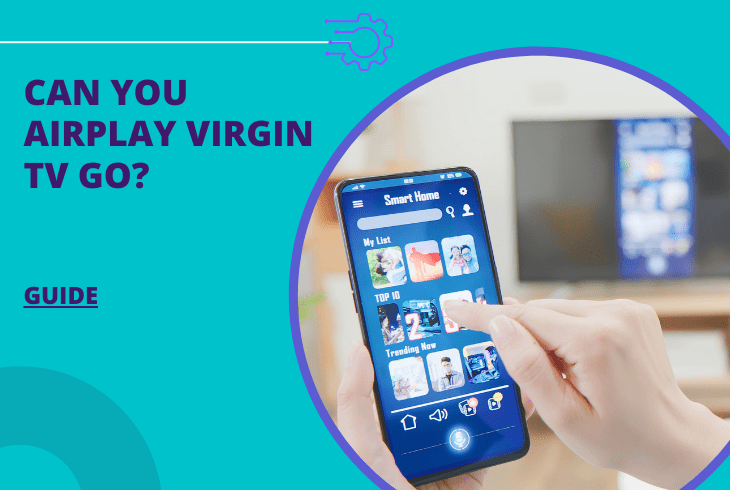 Wondering if you can Airplay Virgin TV GO? What’s possible and what’s not?

The Virgin TV GO application provides a “Screen Cast” feature, but it would work only when the receiver smart TV also supports screen casting.

The Airplay on the other hand is designed to connect only to Apple devices and won’t work with Android Smart TVs or other brands.

It’s only possible to Airplay Virgin TV Go between Apple devices that include Apple TV, MacBook, iMac and even iPad. To cast your iPhone screen on any Smart TV, either use Chromecast Plug or Lightning to HDMI Adapter.

Let’s learn more about how Airplay works and whether it’s possible for Virgin TV GO!

Can You Airplay Virgin TV GO?

The straightforward answer is YES.

You can Airplay Virgin TV GO as long as the receiver device is made by Apple. Such devices include iMac, Macbook, Apple TV and even iPad.

When you’re attempting to Airplay from an Apple device to a non-Apple Smart TV, there are a few options available as well.

There are 2 x general requirements based on what you’re trying to achieve!

The guide is separated into two parts. In case you want to Airplay Virgin TV Go from an Apple device to another apple device follow the steps below.

Otherwise, jump to the bottom part.

How To Airplay Virgin TV GO on Apple Devices?

The Apple device’s “Airplay” is designed to share the mobile’s display on another Apple device with a larger screen.

This allows Apple users to share the Virgin Media TV Go content on Apple TV, iMac and Macbook. You can even Airplay Virgin Go from iPhone to iPad.

Based on the goal you want to achieve by following the guide below!

The most important thing to know when using Airplay to Apple TV is that the firmware version no of both your devices should be above iOS 7.0.

Older Apple TVs and iPhones with outdated firmware won’t be able to use Airplay or install the latest Virgin TV Go application.

Tip: Ensure that your Apple’s Airplay receiver device is turned ON.

Here’s how to Airplay Virgin TV Go from iPhone to Apple TV:

The content from your iPhone’s screen should appear on your Apple TV.

You only need to keep the iPhone Virgin Media Go application streaming as long as you intend to watch.

When you want to Airplay Virgin TV Go from your iPhone to your iMac, the operation is simple.

It’s important to note that you’ll need OS X 10.9 or later, on your iMac for the Airplay to work.

Here’s how to Airplay Virgin TV Go from iPhone to iMac:

When you want to Airplay Virgin TV GO on your Apple laptop, the device must have been running OS X 10.9 or later and be turned on.

Here’s how to Airplay Virgin TV Go from iPhone to MacBook:

Can You Get Virgin Go on Smart TV – Best Options!

When you want to get Virgin TV Go on a Smart TV from your iPhone, things remain quite challenging.

We’ve already clarified that AirPlay only works between Apple devices so to share our iPhone screen on any smart TV, we’re going to use an alternative method.

We’ll review both methods and what’s most important below so let’s jump right in!

The Chromecast Plug is a device that hooks up to the HDMI input ANY TV and allows other devices and apps to cast their screen.

Since we cannot use Airplay on any smart TV, purchasing a Chromecast is one guaranteed way to achieve the goal.

Here’s how to Chromecast Virgin TV GO on any Smart TV:

There is another easy way to get Virgin TV GO from your iPhone to any Smart TV. We’ll be switching from wireless to wired connection in this tutorial.

For this purpose, we’re going to need a Lightning to HDMI Adapter, so we can hook up our iPhone (any Apple device) to our TV.

The adapter plugs into your iPhone’s lightning input and into the HDMI cable, connected to your TV.

From there, you need to Allow the confirmation prompt on your iPhone and select the HDMI source from your TV Inputs Menu. The iPhone screen should appear on the TV.

The final step is to open Virgin TV GO on your iPhone and start streaming on the big screen!

How to Airplay Virgin TV GO from Safari?

The Airplay feature will mirror the screen of your device, which means that anything we put on the screen will appear on our Apple TV/iMac.

Then you can simply hop back into your Safari browser, and stream Virgin Media TV GO content on your device.

What’s displayed on your device will appear on your receiver’s screen as long as the source is streaming.

Thus, to Airplay Virgin TV Go, you’ll need an Apple device as a receiver and all you need to do is share your mobile device screen with the TV. We’ve learned that Airplay won’t work on other Smart TVs and in such cases, we should use a Chromecast or HDMI Adapter.

Now that we’ve learned that it’s possible to Airplay Virgin TV GO and how to do it on multiple devices, we’re ready to enjoy our content.

When trying to share your iPhone’s screen with a non-Apple device, the operation always requires a few extra steps, but it’s always achievable.

Switching to a Wired Connection?

In case you want to connect your Apple devices to non-Apple Smart TVs, one of the best and guaranteed solutions is Lightning Cable to HDMI Digital Adapter.

This is a branded cable designed for the purpose of mirroring your iPhone to watch Virgin Media on a big screen!

Read Next: How to Cast Virgin TV Go?