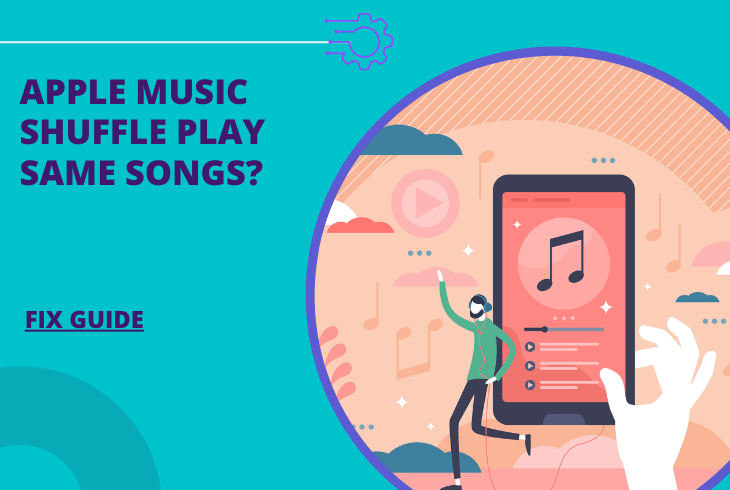 Why does Apple Music shuffle play the same songs? We have the answer you’re looking for!

If you subscribe to Apple Music and you encounter this problem, it can be very frustrating.

We have found a few proven methods that will allow you to listen to all the songs in your playlist while in shuffle play.

Let’s find out how!

To stop Apple Music from repeating songs, change the playback order. Check if you accidentally turned on Repeat Mode. If you did, turn it off. Next, remove unwanted songs from your music library.

Before we move on to the solutions, let us discuss the possible reasons your Apple Music only plays the same songs on shuffle.

Why Does Apple Music Play the Same Songs on Shuffle

There are several reasons that can cause your Apple Music to play the same songs even when you have shuffle activated.

The primary culprit is Apple Music’s algorithm and recommended music.

If you don’t have enough songs in your music library, there’s a good chance that your songs will repeat.

They have an algorithm that knows which songs you’re likely to listen to. It will then repeat these songs to you as you’re listening.

2. Not Enough Songs In Your Library

If you don’t have enough songs, Apple Music tends to repeat your favorite songs.

You want to make sure your playlist or library has at least 30 songs for shuffle to mix up your music.

Apple Music has some playback modes you don’t want to use if you’re shuffling your playlist and library.

One of them is repeated mode, as there’s a good tendency for songs to play again.

4. Based on Your Habits with the App

Ultimately, the reason why shuffle is playing the same songs is your listening habits.

If you skip certain songs consistently, the algorithm can choose not to play that song as often. Instead, it will play some of your favorites.

If you’re asking why does Apple Music shuffle play the same songs, all you need to do is follow these proven solutions.

However, before you do that, you want to eliminate any bugs or glitches by restarting your device.

You can also force close the Apple Music app to ensure that it loads and requests fresh information from the servers.

Solution #1: Change the Playback Order of Your Songs

You might have realized that Apple Music’s shuffle play is not totally random. There are, of course, pros and cons to this.

However, it offers a better listening experience since the next song it plays is something you’re going to play and not skip likely.

One way to refresh the shuffle play algorithm would be to change the order of the songs in your playlist.

You might think it will not do anything since you’ve switched on shuffle play.

Reordering your songs will prompt Apple Music to recreate its shuffle playlist again, giving songs you haven’t heard in a while to play.

Here’s how to reorganize the songs in your playlist:

One of the ways to really mess up with your Apple Music’s current algorithm, so it plays new songs to you, is to hijack it.

It’s a way where you skip songs you normally would listen to so the algorithm relearns your listening habits.

In a way, you’re teaching it what songs you want to listen to right now. It’s an effective way to discover new songs on your playlist that you haven’t heard in a while.

Repeat Mode, as its name suggests, tells Apple Music that it’s ok to repeat songs on your playlist.

Mix it up with the shuffle feature, which basically allows Apple Music to play your songs on repeat. This is why you’ll hear it playing the same songs often.

Since the algorithm also controls how Apple Music shuffles your playlist, if it’s recommending a particular song over and over again, you’ll continue to hear it.

The good news is that you can turn off repeat mode so the algorithm won’t suggest songs that it just played.

Here’s how to turn off Repeat Mode on Apple Music:

Solution #4: Create a Radio Station on the Apple Music App

Creating a radio station on Apple Music is the best way to listen to a wide variety of songs that you like.

You can create one based on an artist, song, or genre. It’s a great way to ensure that the songs Apple Music plays are not limited to your playlist.

The chances of playing the same songs during your listening session will become more uncommon from the wide selection to choose from.

Here’s how to create a radio station on Apple Music:

Smart playlists are an excellent way to manage the songs in your library. For regular playlists, you’ll need to manage them manually.

It simply means that if you want to add or remove a song, you’ll have to do it yourself.

In the case of smart playlists, they will be automatically updated as you add songs to your library.

You can choose the criteria that will determine the songs that will go into your playlist.

If you’re importing songs from a different source, they will be added to your playlists as long as they meet the criteria.

Here’s how to create a smart playlist on Apple Music:

If you have a library with multiple playlists, there’s a way to shuffle all of your songs using the latest iOS Control Center.

The Apple Music app focuses more on your playlists as everything is going to be organized.

However, it can get tricky if you simply want to play your entire music library.

The latest iOS update also adds some extra features to the Control Center. You will now have access to your music without having to open the Apple Music app.

Here’s how to do it using your phone’s Control Center:

These are the ways how you can prevent Apple Music from playing the same songs repeatedly.

For the most part, it’s dependent on your listening preferences and behaviors, but you should be able to limit it by following these solutions.

You can contact Apple customer support to get additional help regarding your apps.

Now that you know why does Apple Music shuffle play the same songs, you’ll be able to lessen the frequency it happens.

However, if you’re in the mood to listen to other songs in your library, getting Apple Music to shuffle better is the way to go.

Read Next: Why Aren’t Certain Songs on Apple Music?