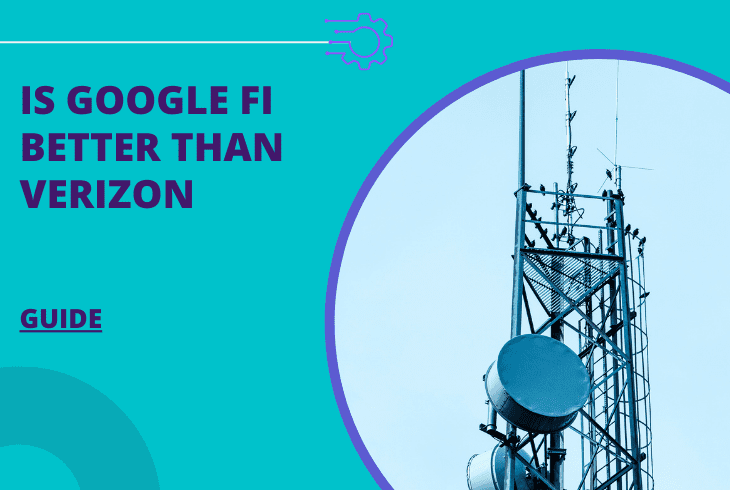 Is it worth switching from Verizon to Google Fi? This is the complete analysis.

Google Fi is known for its excellent 5G coverage in urban areas and ability to seamlessly switch between multiple cellular networks.

Verizon is known for its strong 4G LTE coverage and is particularly well-suited for customers in rural areas.

Read on to learn how the two stack up against one another and which makes for a better choice as your mobile carrier.

Is Google Fi Better Than Verizon?

It’s difficult to make a definitive statement about whether Google Fi or Verizon is better, as the answer will depend on your individual needs and circumstances.

Here is a detailed comparison of the two carriers to help you make an informed decision.

Verizon is a larger and more established company than Google Fi, and it has a more extensive network coverage in the United States.

Verizon’s 4G LTE network covers over 98% of the U.S. population.

At the same time, Google Fi’s coverage is limited, as it relies on a combination of networks from T-Mobile, Sprint, and U.S. Cellular.

However, Google Fi offers coverage in over 200 countries and territories worldwide through its “Fi Global Coverage” feature.

Google Fi offers a flexible pricing model that charges customers based on their data usage.

Customers can choose from a variety of data plans, starting at $20 per month for unlimited talk and text, and then pay an additional $10 per gigabyte of data used.

Verizon, on the other hand, offers a variety of fixed-price plans that include a set amount of data, talk, and text each month.

Verizon’s plans tend to be more expensive than Google Fi’s, with prices starting at around $70 per month for a basic plan with unlimited talk and text and 4GB of data.

Google Fi is only compatible with a limited selection of devices, including Google’s own Pixel phones and a few other Android devices.

On the other hand, Verizon is compatible with a wider range of devices, including Android and iOS smartphones.

If you want to use Google Fi, you may need to purchase a new phone that is compatible with the service.

Both Google Fi and Verizon offer fast data speeds, but Verizon’s network tends to be faster in areas with good coverage.

However, it’s important to note that actual speeds may vary depending on your location and the specific device you are using.

Both Google Fi and Verizon offer international roaming options, but they work differently.

Google Fi’s “Fi Global Coverage” feature allows customers to use their phones in over 200 countries and territories around the world at no additional cost, with the exception of a few countries where additional fees may apply.

Google Fi and Verizon both offer customer service through phone, email, and online chat, but customer satisfaction with these services can vary.

Some customers report having positive experiences with Google Fi’s customer service, while others have had issues addressing their questions or concerns.

On the other hand, Verizon has a reputation for having good customer service, with many customers praising the company for its helpful and knowledgeable support staff.

Both Google Fi and Verizon offer financing options for customers who want to purchase a new phone, but the details of these programs differ.

Google Fi offers financing through a partnership with Google Store Financing, which allows customers to make monthly payments on their phone purchase.

Verizon offers financing through its Verizon Device Payment program, which also allows customers to make monthly payments on their phone.

Google Fi does not have a data cap, meaning customers can use as much data as they want without incurring additional charges.

On the other hand, Verizon has data caps on its mobile plans, with prices ranging from 4GB to 100GB per month.

Customers who exceed their data allowance will be charged overage fees.

Google Fi Vs Verizon: Which One Is Better?

Overall, Verizon has better coverage and more features than Google Fi, making it the better choice for most people.

Here are some additional factors that may be relevant when comparing Google Fi and Verizon:

Both Google Fi and Verizon offer promotions and perks to their customers.

Verizon often offers discounts on devices and accessories and credits for referrals.

Google Fi offers flexible data plans that can be customized to fit your needs and credits for referrals and discounts on devices.

Verizon has a strong network and offers high-speed data options for customers who need it.

Google Fi also has a strong network and offers high-speed data options, but the availability of these options may vary depending on your location.

Both Google Fi and Verizon offer family plans that allow multiple lines to be added to a single account.

Verizon’s family plans often include additional perks, such as unlimited data and discounts on devices.

In contrast, Google Fi’s family plans offer flexible data options that can be customized to fit the needs of each individual line.

After a thorough comparison on ‘is google fi better than verizon’, Verizon is our top pick because it offers faster speeds, a wider variety of devices and data plans, better customer service and support, and a more flexible pricing option than Google Fi.

However, if you’re looking for a low-cost mobile plan with unlimited talk and text but slower speeds, then Google Fi may be the better option for you.

Read Next: Does Verizon Video Calling Use Data? Quick Guide