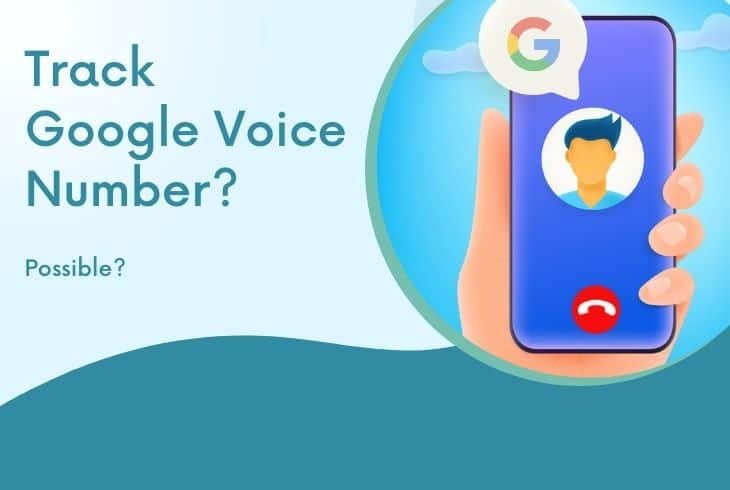 How can you track a Google Voice number? Moreover, is it possible to do so? In this article, we’ll answer whether or not this is possible.

Moreover, we will also be discussing the possibility of using your Google Voice number to trace back to your real number.

No, you can’t easily track a Google Voice number like how regular landline phones and mobile phones are. It’s possible but it would require excellent hacking skills. On the other hand, should law enforcement and the government be involved, they can request your data and information.

How Does Google Voice Work?

Google Voice, formerly known as GrandCentral, is an online telephone service giving everyone who has a Google account a unique telephone number.

You can use the number for personal or business purposes.

It functions just like a regular number and the only thing that makes it distinct is that it’s not related to and connected to any hardware.

It is available as it is – in the digital world.

So, if it works just like a regular phone number, then does this spell t-r-a-c-e-a-b-l-e? No, not necessarily.

Can You Track a Google Voice Number?

If you’re thinking about other people being able to track your Google Voice number like how regular landline phones and mobile phones would, then no, it can’t be traced or tracked.

Yes, it can happen, but the person who would track it would need to have impeccable hacking skills.

To help you with it even further, here are a few points you can consider that would point you in the direction of why it’s not traceable.

Google Voice operates in conjunction with your Google Account. So, there’s actually no physical place where all of these types of information are stored – they’re digital.

Tracking down a Google Voice number would be extremely hard, especially if the Google account is no longer active.

It also does not follow the regular format of numbers. So, hackers would find it difficult – even close to impossible to know and find it out.

It Doesn’t Appear on Online Websites and Phone Books

In addition to that, it also doesn’t appear on phone books (physical and online) as well as online websites.

It’s not automatically listed in any type of number directory if you think of it like that.

You won’t find your Google Voice number even in the nooks and corners of some websites.

It’s Not Linked to Your Social-Media

Not automatically, at the very least. Just because you have a Google Voice number doesn’t mean that it’s automatically matched to your social media or social networking accounts.

In contrast to what most people think about it, your Google Voice number isn’t listed and patched up with your social media or social networking accounts in any way.

Lastly, Google is determined and committed to maintaining the security and confidentiality of your information.

They won’t go around displaying Google Voice numbers on any of their websites.

NOTE: Do note, though, that there are some trusted and high Google personnel that are equipped with all the information about your Google Voice account.

In fact, according to Google’s Privacy Policy, all your information is fully encrypted using SSL (Secure Socket Layer) and is restricted to be seen even by Google employees in respect to your privacy.

Those are just three (3) of the many reasons why your Google Voice number isn’t trackable.

Can People Who I Contact See My Google Voice Number?

Of course, akin to a regular phone (landline or mobile), the person you are communicating with would have access to your information.

Meaning, when you call or send a message to another Google Voice user, they’ll be able to see:

Basically, they would know who you are and all other Google-related information.

Should you choose not to be engaged with a user any longer and for them to be restricted from your information, you can choose to “block” them.

But is it possible to trace and track a Google Voice number to the physical number it’s connected to?

Can You Track a Google Voice Number Back to the Real Number?

Well, the answer to this depends. Since the people who you contact will be able to see your number, then they can trace it back to your original number.

For the people who you don’t communicate with, they can still track down your Google Voice number to trace what your real number is but it’s highly unlikely to happen.

To be able to achieve this, an individual would need hacking skills, especially since Google Voice Numbers aren’t publicly available and listed.

Google Voice and Law Enforcement and the Government

But what if the government or law enforcement becomes involved? Could they have access to your information?

According to Google’s policies, there are a variety of laws and regulations worldwide allowing government agencies to request user information for administrative, civil, criminal, and national security purposes.

What this means is that if the law enforcement requested a user’s information and Google deems the reason to be valid, they’ll accept the request and release the information required.

Google wouldn’t just give out information just because the one requesting is law enforcement, no, it doesn’t work like that.

According to the company, “they carefully review and assess each request to be sure that it satisfies the laws applicable. Should a request require too much information, they try narrowing it down.”

In some cases, they even refuse to produce information at all.

Read Next: Google Voice Could Not Complete Your Call, What to Do Next?

So, if you’re wondering about the possibility of tracking a Google Voice number, it’s highly unlikely to happen. It’s possible, yes, but it can’t be done by a regular person – the person who would track it needs to be a hacker, and not just any type of hacker, he/she needs to be a good one.

And could it be possible to track a Google Voice number to the real number it’s linked/connected to?

Yes – it can be done by the people who you’re communicating with since they’d already know your information via your Google Voice number.