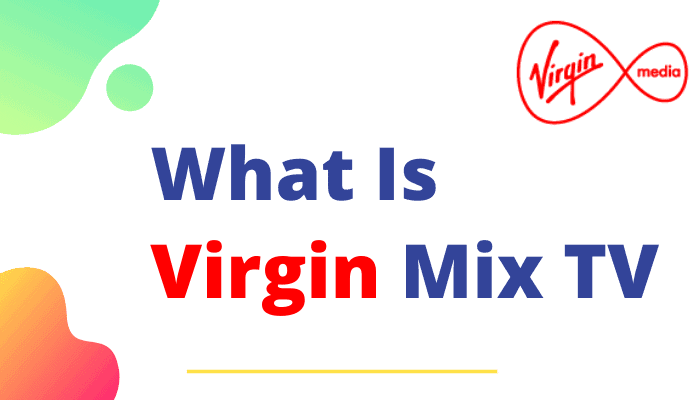 Virgin Mix TV is one of the essential subscription-based services available in the United Kingdom.

With the rise of several well-respected Television service providers, you can now choose which one is most suited for your lifestyle.

But knowing which Television package and channels to watch is best for you may come a bit tricky. You would need to consider several factors, such as price, possible add-ons, and the number of available programmes.

Here, let us take a detailed look at Virgin Media’s most basic TV deal so that you would know what to expect from their services.

What is Virgin Mix TV?

Virgin Mix TV is one of the original TV packages offered by the Virgin Media company, one of the leading telecommunication corporations in the United Kingdom.

READ ALSO :  Why Is My Virgin Remote Not Working?

Compared to their Player channels bundle, this standalone TV package does not come with a phone line and broadband subscription.

For your new customers, you automatically get this particular Television package unless you decide to spice it up with their other broadband deals.

The Virgin Media Mix TV package name is due to the blend of Freeview essentials and premium programmes it offers.

Thus, this package would be best suited for households that love to watch the most in-demand series and movies on their television screens.

You can access the Virgin Mix TV channel list on your television screen through their 500GB TiVo box.

READ ALSO :  How to Get BBC iPlayer on Virgin Media? Complete Guide

With this streaming device, you can pause, rewind, and record up to 3 of your most awaited shows simultaneously.

If you suddenly decide that you want more features to get the best viewing experience at home, you can pay an additional fee for their more improved 1TB V6 box.

But what makes their services more accessible and convenient is their Virgin TV Go app.

Through this software, you continue binge-watching your favourite shows on your smartphone and tablet.

So long as you have WiFi, 3G, or 4G near your area, you can access the Virgin Mix Television channel list at home or on the go.

READ ALSO :  Why is Virgin Media Catch Up Not Working? Complete Fix Guide

When you subscribe to this particular entertainment package, you get access to 232 channels, including 86 free-to-air Freeview programmes. You can also enjoy up to 36 radio stations.

In their channel list, you can find up to 16 entertainment programmes.

Let us take a closer look at the Virgin Mix TV Channel List UK below.

There is no better way to relax than to watch relaxing and funny shows on your television screen.

By subscribing to Virgin’s Mix Television package, you get access to the following in-demand entertainment programmes:

You can check out their factual and lifestyle channels if you love learning new and exciting information.

These include the following highly sought-after programmes:

Meanwhile, if you need to take care of your children, keep them occupied with their Kids’ channels. These shows include:

Music lovers, on the other hand, can listen to the monthly hits or their favourite songs on the following programmes:

Meanwhile, movie lovers can stream the biggest blockbusters on their television screens through the following entertainment platforms:

However, not all newly released movies are available on these programmes. Thus, if these shows are not enough, you can always upgrade to another package.

You can add Sky Cinema to your Mix TV deal, or subscribe to their Virgin Movies On Demand, where you can pay a certain amount for every film that you would want to watch.

If you want to stay updated with the latest sports happenings, you can also watch a variety of sports on their sports channels. These include the following:

Aside from this extensive collection of Channels and radio shows, you can also stream videos and stay up to date with your most awaited programmes on their online catch-up players.

READ ALSO :  Why Is Virgin V6 Box Not Verifying? Know How To Fix!

These include the following platforms:

Virgin’s Mix TV package is not available throughout the UK. Some regions may not support this service due to connectivity restraints.

With that said, their channel list is subject to regional variations.

Aside from these restraints, another downside of this Mix TV package is that you cannot add Sky Atlantic on your deal.

How Much Is the Virgin Media Mix TV Package?

Their package cost would cost £30 per month for a rolling contract of 12 months. You would also have to pay an upfront fee of £35 for its installation in your area.

Since you are on a 12-month rolling contract, you automatically get a Minimum Term of 12 months before you can cancel their services without paying an early termination charge.

READ ALSO :  Why is My Virgin Media Picture Breaking Up? Fix Guide

Additionally, if you want to add more premium channels, you would have to pay extra fees.

For instance, sports fanatics can add Sky Sports to their Mix TV deal for £31.75 per month. Doing so would also give you access to their HD programmes.

Meanwhile, movie fans can get up to 11 channels from Sky Cinema for £21 per month.

Read Next: Can You Airplay Virgin TV Go?

Most of us rely on the shows on our television screens to relax from a tiring day at work. With Virgin Media’s Mix TV package, you can access an extensive list of channels and radio channels throughout the UK.

READ ALSO :  Why Is Virgin V6 Box Not Verifying? Know How To Fix!