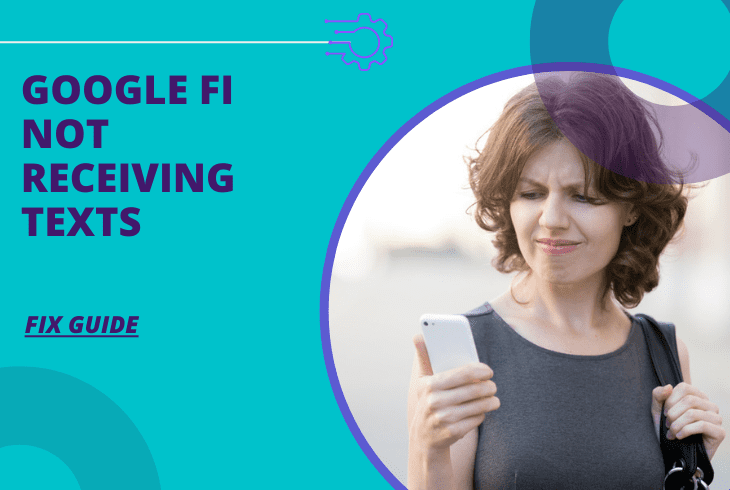 Whenever Google Fi not receiving texts or you’re unable to send messages in this post we’ll learn every possible cause and utilize the best working methods to solve the problem.

When Google Fi is not receiving texts users’ first job is to make sure that there is strong coverage and not only 1 or 2 bars. The next step is to update the Messaging app and use it as the default for the device.

Lastly, users need to be logged in to the Google Fi mobile app.

There are quite a few reasons for the messages with Google Fi not to appear.

Sometimes the problem is related to a bad signal, in other cases, the issue comes from migrating from one device and provider to Google Fi with another smartphone.

Let’s learn what are the best working solutions to solve the problem in no time!

How To Fix When Google Fi SMS Not Working?

To solve the problem we strongly suggest following the solutions below in order:

To solve problems with sending or receiving messages with Google Fi, you’ll need to make sure that you’ve got the latest version of the message application.

When the version of the app is outdated, the messages might not be sent or the entire app won’t be able to open.

When you see an “Update” button instead of an “Open” button, it means that the app is outdated.

An update takes a few seconds and the only requirement is for your smartphone to be connected to the WiFi or have 3G/4G/5G. When the update is ready, test sending a message.

Google Fi requires a SIM card to activate your services.

It does not matter whether you’ve acquired a mobile device with a pre-inserted SIM card or it has been shipped, users need to make sure that the SIM is properly positioned into the device.

When the size is not supported by the mobile device, users would need to acquire a SIM adapter.

In addition, the SIM card has to be positioned properly so let’s learn how:

In order for Google Fi users to identify the problem with the messages, they need to log in to their Google Fi account by downloading the Project Fi application.

From the Google, Fi app users can manage the entire Google Fi account.

In cases where a different messaging app is selected to be a default, your Google Fi messages won’t appear in the Messages app that you expect them to.

Luckily, you can change the default messaging app on Android:

We all know that when our cellular service is out of signal, we can’t make calls or receive messages.

However, when the coverage is back, ALL missed messages will come at once.

You can see the strength of your signal on the top right/left of your smartphone’s screen.

When you have only 1 or 2 bars, the coverage is weak and Google Fi messages might not arrive instantly.

However, when you see LTE, it means that there is almost no coverage and it’s unlikely messages to appear until the signal improves.

You can improve the signal by doing the following:

In case you’re in a forest or on a vacation where the signal is weak, the Google Fi messages won’t appear until the strength of your coverage improves.

Assuming that you’re not aware of what the Airplane mode is, the feature disables ALL connectivity services on your mobile device.

That includes WiFi, Bluetooth, and Cellular.

As the name suggests, the Airplane mode is made to be turned ON when you’re flying to prevent interference with the airplane and it’s necessary only in such cases.

Make sure that the Airplane mode on your smartphone is not enabled.

On both iOS and Android devices, the Airplane mode can be found by accessing the Quick Menu. On iPhones, the quick menu comes from the button and on Android from the top.

Solution #7 Migrate From iMessage To Message

In some cases Google Fi not receiving texts because of migration between operating systems.

When you’re switching from iPhone to Android it’s important to switch the texting from iMessage (the default iPhone text app) to Messages, which is the universal Android text app.

You need to stop the iMessage before removing the SIM card from your iOS device!

Here’s how to turn OFF iMessage:

In case you have already removed the SIM card, you’ll need to insert it back in to remove the iMessage.

For cases in which the user no longer has access to the iPhone device, a request should be made to Apple to deactivate the iMessage for your phone number.

This solution will help users that subscribed to Google Fi and kept their old mobile numbers.

In such cases, the chat features on the previous device have to be disabled for the SMS/MMS features to function on the new device.

I Keep My Old Device:

I Don’t Have My Old Device:

When you don’t have your old device there is a pretty easy way to disable the chat features with some help from Google.

The only requirement is a verification that you’ll need to undertake so the parties can confirm the ownership of the involved mobile number.

You’ll need to insert your mobile number under “Without your previous device” on this page.

From there you should await a 6-digit verification code and then the chat features for your old device will be turned OFF by Google.

Hence, to fix when Google Fi messages can’t be received, users need to update the Messages app and re-insert the SIM card. The next step would be to sign in to the Google Fi application and set the Messages app as a default, before contacting Google for help.

Read Next: SIM Not Provisioned for Voice Google Fi? – (Fixed)

Now that we know why Google Fi not receiving texts and how to solve the problem even when migrating from one device to another, the rest is easy.

Keep in mind that cellular coverage is not great everywhere in the world and sometimes waiting for a few hours improves the signal and messages will start to appear.

We hope that this post was helpful and for more related posts make sure to check our tech blog!